Go to the even darker side Oct. 1 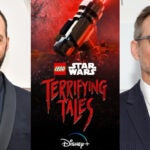 And here are the three stories that will be told by Vaneé during the frighteningly fun special: “The Lost Boy,” the story of how a young Ben Solo first meets Ren; “The Dueling Monstrosities,” which imagines how Darth Maul and General Grievous were reborn; and “The Wookiee’s Paw,” which gives a look at what might have happened if all of Luke Skywalker’s greatest wishes were immediately granted. The special is sure to leave fans with spine-tingling chills and goose-bricks.