We know the adage that if we don’t learn from history, we’re doomed to repeat it. And as we live through this current dark timeline you’d assume it’d be too much to watch a nine-episode series about the continued oppression of women and the creation of the political divide we’re seeing play out today. In reality, what creator Dahvi Waller does with “Mrs. America” is tell a story about the numerous ways to be a woman — and that lack of unity is what ultimately keeps us divided. The A-list directors and cast do their part to create a work with so many moving parts, so many storylines and nuances worthy of their own series, that the series could easily lend itself to a book of essays.

Taking place between 1971-1980, it’s remarkable that each episode packs in so much history in a way that never feels superfluous. Each episode is titled after the woman who is the primary focus, with the first being conservative gadfly and face of the conservative women’s movement Phyllis Schlafly (Cate Blanchett). With her pearl necklaces and toothy grin, Blanchett is the picture perfect embodiment of the happy housewife that Schlafly spoke for, raising six children with her husband, Frank (John Slattery) by her side. It’d be easy for the script to turn Schlafly into a one-dimensional, fire-breathing harridan — and with Blanchett simultaneously inhabiting the role of elegant villainess so many times before, her casting implies a lean in that direction — but, like womanhood in general, that’s too simplistic and easy.

With its marketing heavily using the Guess Who’s “American Woman,” it would imply “Mrs. America” to be more rebellious than it is. What Waller and the various directors — including Anna Boden and Ryan Fleck, as well as Amma Asante — do is interweave the ERA fight with all the nuances of feminism that have kept women divided to this day. Schlafly’s crusade is the obvious adversary, but the series actually brightens to life more when it’s looking at the role of privilege and status that plays between the lines. Schlafly’s “Stop ERA” group becomes a cadre of mean girls on the small scale, led by Melanie Lynskey’s brown-nosing Rosemary. Schlafly’s desire to win at all costs eventually opens the group up to accepting racists and attracting the Klan.

Sarah Paulson’s Alice, Phyllis’ best friend who brings the ERA into Phyllis’ worldview, takes the reins for the second half of the series, turning in a bravura performance. The character appears to be fictional, which allows for her to develop from Phyllis’ lapdog to a woman who wishes to be better: more outspoken, more dignified. Presented alongside her is Pamela (Kayli Carter), a scared housewife so desperate to escape her life yet unable to function without someone telling her what to do. Placed in Phyllis’ orbit these two characters showcase that the movement of presumably happy housewives is one bent on compliance, whether that’s to their husbands or a charismatic woman who doesn’t practice what she preaches. 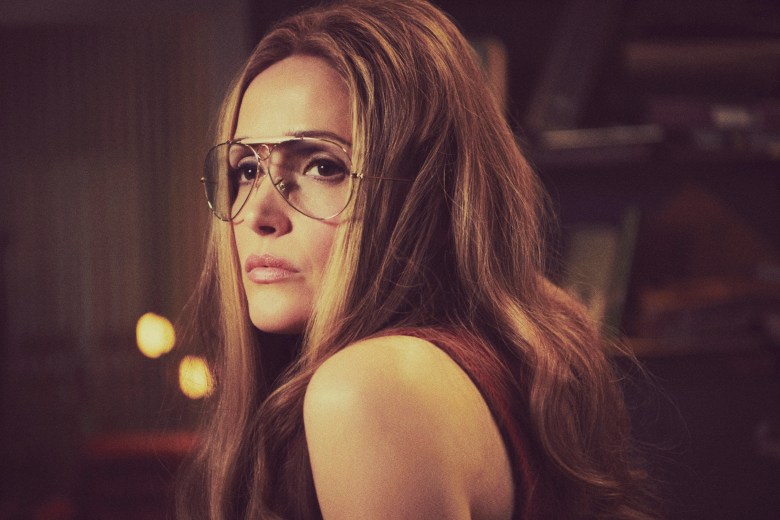 Over the span of nine episodes Schlafly is presented as a complicated woman whose mean-spirited personality and hypocrisy is built into her as a means of being accepted by men. Introduced prancing around in a bathing suit at a political rally, Schlafly sells herself as the good woman — the perfect wife and mother — that men will support. Sure, it might mean a hand on the shoulder or a dirty joke said in her presence, but Schlafly believes it’ll lead to bigger things. In fact, the Equal Rights Amendment isn’t something she considers worth noticing, being more interested in foreign policy than anything else. But, as is proven throughout the series, Schlafly realizes the only way to be taken seriously is to stay in her lane and bring that fire towards a cause men fear: that one day their wives will turn against them.

Blanchett works to sell Schlafly as a loud, brash woman on a misinformation campaign you could connect to today’s political landscape. When she’s called out for her lack of facts, she doesn’t back down but just keeps talking in the hopes that the other person will shut up. The role doesn’t just require a woman who can yell, but one with a controlled anger to her, which Blanchett holds in spades. But she’s just as adept at the smaller scenes that create empathy for the woman. She struggles with her son being gay, not just in terms of how it would blow back on her, but how it fits in with the changes to the movement that would discriminate against the then-undefined LGBTQ community.

A fantastic episode pitting Phyllis alongside Jill Ruckelshaus (Elizabeth Banks), the former head of the White House Office of Women’s Programs, is one of several moments of common ground between the two groups. As the two women talk the dialogue perfectly illustrates the slight nuances in their individual philosophies. Jill understands the men talking to both groups don’t care, but where Phyllis sees them as pawns to help her rise, Jill is the one to tell them “they’re [metaphorically] looking up your skirt.”

This isn’t to say the series is one-sided. None of the women come off as one-dimensional and there is just as much controversy found within the group supporting the ERA. Initially led by Ms. magazine founder Gloria Steinem (Rose Byrne), Bella Abzug (Margo Martindale), and “Feminine Mystique” author Betty Friedan (Tracey Ullman), each woman has their own desires that they hope to accomplish with the passage of the ERA. Byrne’s Steinem is equally showy as Blanchett’s Schlafly, especially with the actress looking like a carbon copy of the real Steinem, but compared to the other actresses, her plotline feels simpler (relatively speaking). As the pretty face of the group, she strives to get abortion included as part of the ERA. And while every single actress in this series has awards-worthy moments in their individual episodes the series highlights focus on Ullman’s Friedan, Ari Graynor’s Brenda Feigan-Fasteau, and Uzo Aduba’s Shirley Chisholm.

Episode 3, entitled “Shirley,” is the episode every other series will have to beat. The women’s rights movement of the 1970s is often criticized for focusing on white women, and watching Aduba’s Shirley Chisholm navigate the murky waters of appealing to all voters while wanting to be her own individual is packed with wondrous scene after wondrous scene. It’s a master class in the discussion of race with regards to feminism, personal identity, and the political landscape. Though it often hits incredibly close to home with regards to our current treatment of female presidential candidates, what director Asante does is illustrate that history has continually let down — and will continue to do so —black women. Make no mistake, Aduba deserves all the awards.

Graynor, long a solid character actress, also gets a chance to show her serious acting talent in Episode 5, “Phyllis & Fred & Brenda & Marc.” Paired opposite Adam Brody, Graynor’s Brenda exemplifies all the confusion with regards to marriage and sexuality. More importantly, her takedown of Phyllis on live television should be on repeat regularly.

As for Ullman, her Betty Friedan is a woman left embittered, being the so-called hero of the women’s rights movement yet cast aside, both because of political issues as well as her own antipathy towards putting lesbians in the movement.

There’s far more that could be written about “Mrs. America,” from its analysis of religion, the distinctions in class, or any one of the number of leading ladies I didn’t mention. The point is that FX’s new series is a must-watch. It reminds us, yet again, of how far we’ve come as a country and unfortunately how far we still have to go. It also shows there’s not just one way to be a woman, that women don’t naturally agree on things — and does that ultimately make us unable to ever be united? “Mrs. America” is a show that will leave you thinking and, if you’re femme in any way, questing for a revolution.