BBC Breakfast’s Saturday morning show saw Chris Mason and Naga Munchetty on the famous sofas to go over the weekend’s biggest news stories as well as being joined by a range of guests throughout via video-link. However, at one point, Naga was left baffled by her co-star Chris’ advice on how to keep cool in through the hottest days of the year so far after the latest weather update this morning.

Yesterday saw some of the highest-ever temperaturorded in the UK, reaching 37.8 degrees.

Those across the country were eager to know if the hot weather would continue into the weekend, with BBC’s weather presenter Nick Miller providing an update.

Luckily, he promised some cooler weather on the horizon,If you do want a bit of rain in the garden that’s on the way on Tuesday…

“It does look – after things turn wetter after time – as if things will turn hotter for a  later next week,” he noted. 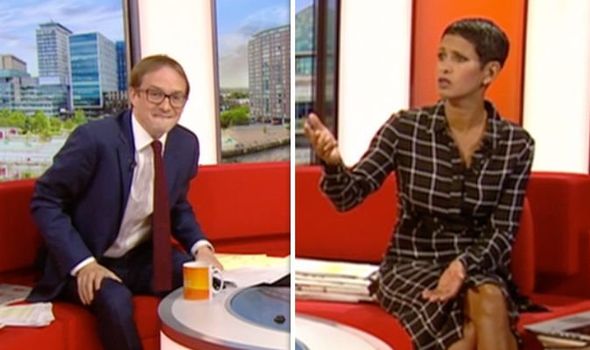 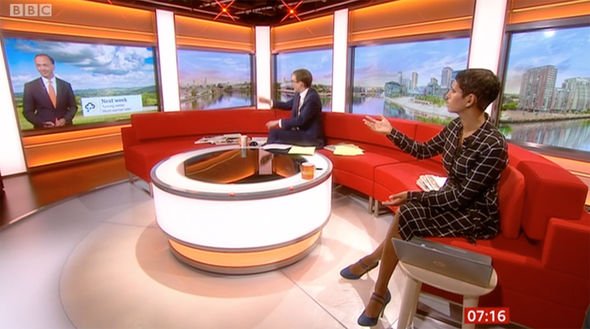 However, this update prompted host Chris to remark: “Thanks Nick, no more socks in the fridge then?”

He continued: “I was reading an article on techniques to help with sleeping during the hot weather, one of which was…”

Nick interjected: “You do what you can, don’t you!”

As the duo laughed over the recommendation, a baffled Naga asked her co-stars: “Why would you wear socks to bed if it was hot anyway?” 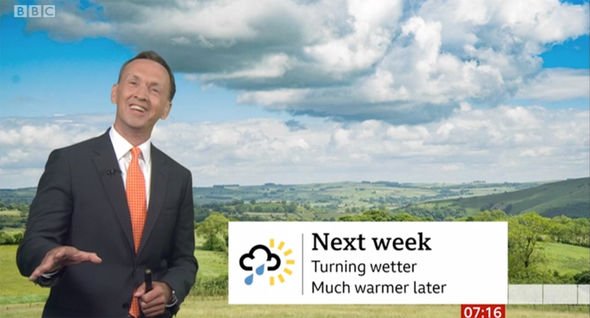 Chris explained: “Well, I think if they’d been in the fridge, then they’re cold…”

“Nick’s face said it all,” added Naga, pointing back to the weather presenter and her co-host couldn’t help but laugh at her reaction.

She asked again: “Why would you wear socks to bed?!”

“Now I start thinking about it… surely it’s our good friend the open-toed sandal,” laughed Nick.

“Another conundrum for a Saturday morning,” remarked Naga as the trio continued to laugh over the bizarre method to cool down.

Elsewhere on the programme, the pair were also joined throughout by BBC Sport host, Mike Bushell.

The show favourite was broadcasting live from Wembley Stadium this morning, where the FA Cup Final clash between Arsenal and Chelsea will take place later today.

However, it was eerily quiet at the famous London ground.

Mike said: “You set me the challenge of finding a vuvuzela Naga, that’s ridiculous, I’m not going to find one of them, that was back in 2010.

“But look, Arsenal and Chelsea-themed balloons,” he said, with a red and blue balloon in each hand.

He proceeded to deflate the balloons, adding: “Sums up the feeling really here, bit deflated without the crowds.

“Normally this would be a sea of colour throughout the day, the noise of fans singing and dancing along to music…

“You feel for all the businesses around here which do a roaring trade in the run-up to kick-off but not today… it’s very empty and quiet.”

BBC Breakfast airs daily from 6am on BBC One.

Related posts:
August 1, 2020 TV and Movies Comments Off on Naga Munchetty left speechless by BBC Breakfast co-star’s odd admission ‘Why would you?’
Celebrity News:
Chris Moyles shows off weight loss as he admits weighing himself ‘six days a week’ – but expert says he needs to ‘break free’
Bella Hadid Shows Off Her Abs While Shopping in NYC
The Weeknd Donates $300,000 To Beirut Relief Fund
Pregnant Katy Perry Reveals Why She’s Not Afraid Of The ‘Pain’ Of Childbirth
'WAP' and Nine Other Music Videos Featuring Kylie Jenner
Recent Posts
This website uses cookies to improve your user experience and to provide you with advertisements that are relevant to your interests. By continuing to browse the site you are agreeing to our use of cookies.Ok