Janet McTeer was introduced to Ozark in a recurring role in season two. The Netflix star portrayed the ice cold attorney for the Navarro cartel, but concluded her stint with a shocking death scene in the season finale. The actress recently revealed she always suspected the fate of her character.

Marty (played by Jason Bateman) and Wendy Byrde (Laura Linney) returned in the money-laundering crime drama Ozark for a third season on Netflix in March of this year.

Following its surge in popularity, the thrilling series was renewed for a fourth and final season in June 2020.

Production of the series will continue following the relaxation of the coronavirus lockdown across the states, and is set to land the Byrdes in more hot water after beginning a new partnership with the Navarro cartel.

The final moments of the latest episode, The Toll, shocked fans with the surprise death of Helen Pierce (Janet McTeer). 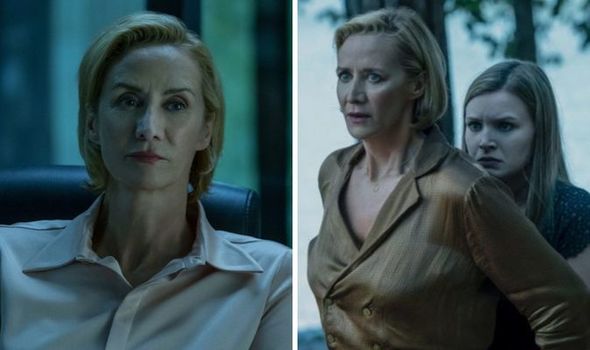 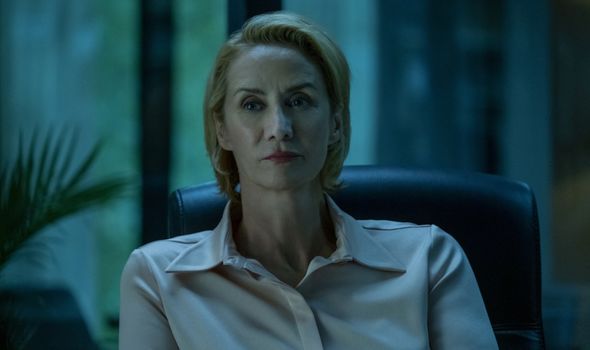 Helen was introduced in the second season as the ruthless enforcer and legal advisor for the Navarro cartel who attempted to make a move against the Byrdes in season three.

However, after cottoning on to her lust for power, Omar Navarro (Felix Solis) has Helen killed in front of the Byrdes.

The gory sequence came out of nowhere for most Ozark fans, and was a shock to the system for the Byrdes who ended the new season covered in Helen’s blood.

Despite this horrific death sequence standing out as one of the most unpredictable scenes of season three, Janet McTeer revealed her character’s death wasn’t a surprise. 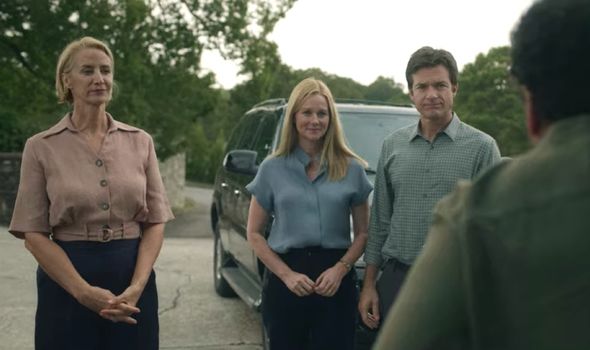 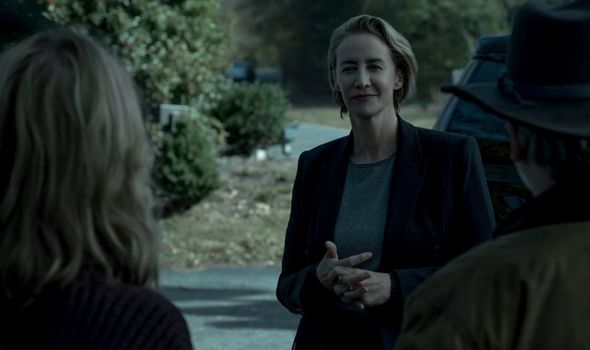 During a virtual conversation with the Ozark cast on SAG-AFTRA Foundation’s YouTube channel, McTeer confirmed she was always aware Helen was doomed to die.

She said: “I knew it was going to happen from the moment I signed my contract.

“I knew how many episodes I was doing and I knew the arc of the character, certainly in season three.”

Helen Pierce’s promotion to the main cast had some fans fooled she would be sticking around as the Navarro’s attorney into the fourth season.

However, when McTeer signed on to join the cast of Ozark she was fully aware she’d be departing the series at the end of season three.

The bloody execution has quickly become renowned as one of the more violent moments of the crime series and left many Netflix subscribers stunned as the final credits rolled.

McTeer also provided some production insight into Helen’s death scene, and revealed the shooting sequence only took the cast and crew a single take to pull off.

“If you imagine the reset between all of that it would have taken a very long time with all the things you have to take off and put back on again. But the actual bit you’re referring to, I think we shot it once.”

With a fourth season on the way, plot details are being kept under wraps but many fans have already predicted more major deaths to come.

No release date has been set, but Netflix revealed the final season will consist of 14 episodes split into two parts.

Ozark seasons 1-3 are available to stream on Netflix.

Related posts:
July 10, 2020 TV and Movies Comments Off on Ozark spoilers: Janet McTeer reveals Helen’s fate was sealed since season 2
Celebrity News:
Alicia Keys Teams Up with E.l.f. Beauty for New Lifestyle Beauty Brand!
Joey King on Jacob Elordi's Claim He Didn't Watch 'Kissing Booth 2'
Jennifer Garner Spotted With Bradley Cooper and His Kid Amid Split Rumors With Boyfriend
Fabolous and T.I. Blasted on Social Media for Revealing Record Labels Insisted They Hide Their Wives and Families
'General Hospital': Wes Ramsey Had a Crush on Laura Wright Long Before They Started Dating
Recent Posts
This website uses cookies to improve your user experience and to provide you with advertisements that are relevant to your interests. By continuing to browse the site you are agreeing to our use of cookies.Ok