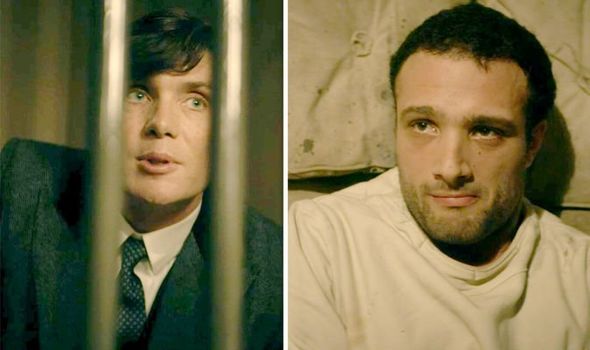 With Peaky Blinders season six dropping on Netflix recently, some fans of the BBC drama have been re-visiting series five to refresh their memories. The penultimate instalment of season five had its share of thrills as Tommy Shelby (played by Cillian Murphy) formulated a plan to take down fascist politician Oswald Mosley (Sam Claflin). However, he needed some help from an old friend and headed to an asylum to find the one man who could help him.

WARNING: This article contains spoilers from all seasons of Peaky Blinders

Who is Barney in Peaky Blinders?

Barney Thompson (Cosmo Jarvis) knew Tommy and Arthur Shelby (Paul Anderson) from their time on the frontline during World War One.

They had fought together at the Black Water and they called Barney “sergeant” when they initially met at the asylum.

Barney was incarcerated due to his mental health problems and referred to as an “animal” by the guards in the hard-hitting scenes.

Tommy visited the asylum in a bid to enlist Barney to assassinate Oswald, who has been a thorn in his side throughout this season.

By getting rid of Oswald, Tommy can re-start his war with the rival Glaswegian gang the Billy Boys.

Before asking him to kill Oswald, Tommy offered a pill to Barney that would end his pain and incarceration.

But Barney was optimistic about the future and had no plans to end his own life when presented with the option.

Tommy seemed confident about using Barney’s skills from the war as the best sniper to take down Mosley.

Whether Barney was going be carry out the hit on Oswald remained to be seen but Tommy was intent on ridding himself of his powerful foe.

This isn’t the first time that Peaky Blinders has dealt with mental health and the impact of the war on the ordinary men who were sent into battle.

Tommy, too, is struggling with his demons – some of which are due to his time during the war.

In season four, Tommy struggled with nightmares of digging tunnels and trenches.

His brother Arthur also struggled with his anger which consumed him and led him to do terrible things throughout the course of the show.

Perhaps most tragically, fans saw the character of Danny Whizz-Bang (Samuel Edward-Cook) suffering from PTSD and sacrificed his life for Tommy.

To add another layer of poignancy and perhaps foreshadowing to the scene between Tommy and Barney, the gangster promised there would be “a big f***ing bang” when the Peaky Blinders would spring him out of the institution.

Barney was heard repeating the words over and over, harking back to the dearly departed Danny.

Prior to his role in Peaky Blinders, actor Cosmo Jarvis featured in 2016 film Lady Macbeth as well as roles in Vera and BBC drama My Mother and Other Strangers.

Peaky Blinders season six continued to analyse Tommy’s mental health as he continued to be haunted by his demons from the war.

Arthur, too, was teetering on the brink and turning to opium to survive with both brothers on the edge.

Fans are hoping there will be a Peaky Blinders film to round off the series, which could see further exploration of Tommy and Arthur’s inner demons.

Related posts:
June 14, 2022 TV and Movies Comments Off on Peaky Blinders season 5: Who is Barney? Why did he end up in the asylum?
Celebrity News:
Are Princess Beatrices recent events a way to distance herself from her father?
Hoda Kotbs absence from Today explained by Savannah Guthrie as well-known subs step in
The Chicks Postpone Shows As Natalie Maines Placed On Vocal Rest
Kim Kardashian Mocked Over Uncomfortable Office Chairs
Gloria Hunniford rushed to hospital after terrifying fall breaks her eye socket
Recent Posts