Radioactive is a true-life story depicting the lives of Marie and Pierre Curie, the husband-and-wife team of scientists who became Nobel Prize winners. Radioactive was released on July 24, 2020, by Amazon Prime. In the movie, Rosamund Pike portrays Marie Curie and Sam Riley plays Pierre Currie. The film is based on the graphic novel, Radioactive: Marie and Pierre Curie: A Tale of Love and Fallout by Lauren Redniss.

Who is actor Rosamund Pike, and what movies is she known for? 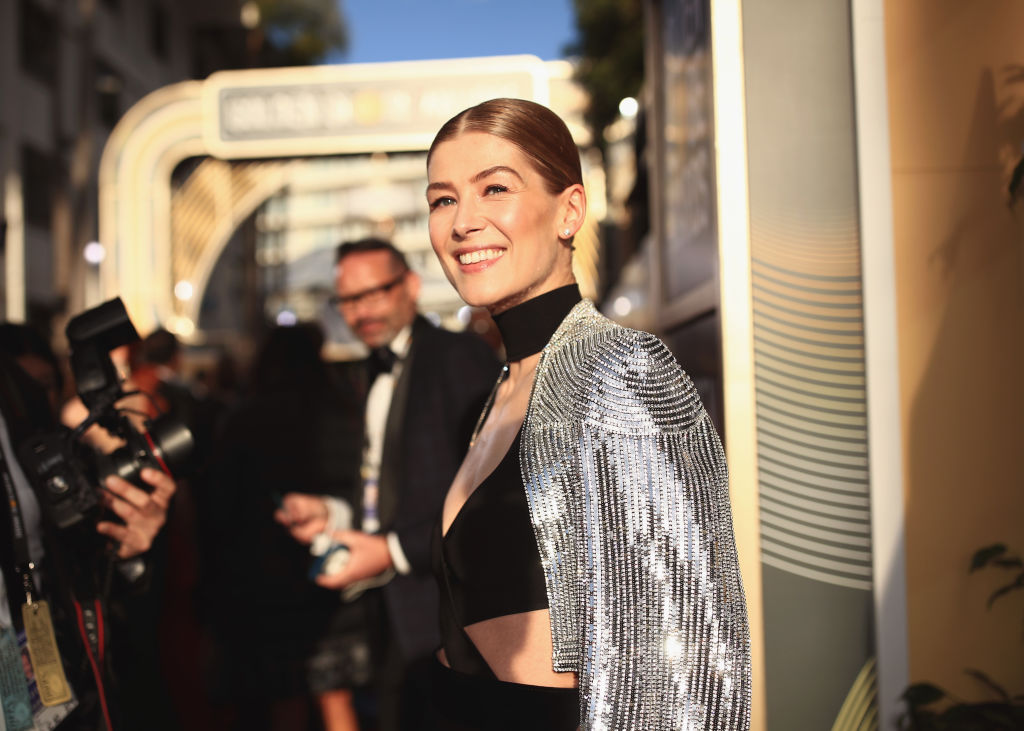 Pike may be best known for her role in the 2014 movie Gone Girl. Pike, an English actress, was born in London in 1979. The only child of opera singers, she began acting and directing during her Oxford education.

In 2001, she starred as a Bond girl in Die Another Day, and in 2005 she played Jane in Pride and Prejudice alongside Keira Knightly. Pike was nominated for a Golden Globe Award for Best Actress for the war drama A Private War.

In an interview with ABC News, Pike explained her attraction to the Radioactive role. It all began with Marie Curie being such an “unruly element” herself. Pike thinks of herself as a bit naughty and mischievous, which led her to consider the lead character in Radioactive. She described Curie as someone who “never played by the rules.”

“I want to play this woman,” Pike recalled of her decision. “There’s mischief to be had.” The actor also acknowledged the role was exciting because she herself finds science “sexy.”

Pike also feels Curie would have not only promoted the #MeToo movement, but also that the scientist lived it herself. Curie was confident that her intelligence not only equaled but generally excelled that of the male scientists she was surrounded by.

“She lived equality, she owned it,” Pike told ABC. “… I don’t think she cared much that she was a woman and everyone else was a man.”

At the film’s London premiere, Pike further explained Curie’s accomplishments to The Upcoming:

Marie Curie exposed and revealed the phenomenon of radioactivity to the world … they proved the existence of radium, one of the strongest radioactive element.

Curie had worked for years to prove that radium existed, only coming to find that her discovery created controversy. The revelation contained both a “huge power for good — cancer therapy — and also, the potential for tremendous evil — the atom bomb.”

Dealing with all of the fallout of the discovery is a big part of the story of Radioactive.

‘Radioactive’ star Rosamund Pike on working with the film’s director

Pike also told HeyUGuys at the London Radioactive premiere that working with Academy Award-nominated director Marjane Satrapi was a highlight of the film.

The Gone Girl alum said that she loved developing the story of Marie Curie with her. Pike felt Satrapi was “completely the right person to get inside the big brain of Madame Curie.” The actor praised the director’s ability to make the science cinematically appealing. She also hopes they will be able to collaborate together again on another project.

Additionally, Pike feels that Radioactive is not a traditional biopic about one person. The actor knows that most people feel they know about Madame Curie. But still, she believes the film will surprise people. Talking again to The Upcoming, Pike shared the benefits of the role included “finding more about Madame Curie — who is my heroine now really.”

“She lived like I would like to live,” the actor emphasized. “Living her own truth … She owned her own place as a woman in a man’s world.”

Related posts:
August 4, 2020 TV and Movies Comments Off on 'Radioactive': What Is 'Gone Girl' Star Rosamund Pike's New Amazon Movie About?
Celebrity News:
Chrissy Teigen Just Took 1 of Julia Child's Most Famous Dishes to Another Level
New York Dolls Guitarist Sylvain Sylvain Dead At 69
Jordyn Woods Seeks Prayers for BF Karl-Anthony Towns Amid COVID Diagnosis
Khloé Kardashian Needs to Break Up With FaceTune — Especially When She Isn't Using It On Her Face
The Real Reason Trump Met With MyPillow Guy Mike Lindell Again
Recent Posts
This website uses cookies to improve your user experience and to provide you with advertisements that are relevant to your interests. By continuing to browse the site you are agreeing to our use of cookies.Ok