The systematic racism and violence committed by police officers against innocent Black people was already in the national conversation when director Reinaldo Marcus Green’s “Monsters and Men” premiered at the Sundance Film Festival in 2018. Nevertheless, Green’s debut has taken on additional resonance in recent weeks, in the aftermath of George Floyd’s death and the ensuing protests. Green’s movie unfolds as a triptych that evaluates a similar situation from three perspectives: the conflicted young man (Anthony Ramos) who films the death of an unarmed Black man at the hands of racist officers, a frustrated Black officer (John David Washington) uncertain whether to speak out about his colleagues’ behavior, and the challenges faced by a rising young athletic star (Kelvin Harrison Jr.) who can’t decide if he should take a knee. The drama was inspired by Eric Garner’s death, but continues to resonate two years later as similar situations stir protests across America.

Green has been processing all of it during one of the busier moments in his career. Before the pandemic hit, he had recently wrapped production on the Mark Wahlberg bullying story “Good Joe Bell.” While the film was accepted into this year’s Sundance, Green and his team decided to hold off for the fall festivals while tweaking the final edit; in the meantime, Green started shooting “King Richard,” a biopic of Venus and Serena Williams’ father starring no less than Will Smith. That production has been halted like everything else, but Green continues to chip away at “Good Joe Bell” (with a little help from executive producer Cary Fukunaga). This week, Green took a break from his editing suite to discuss how “Monsters and Men,” which Neon recently made available for free on several platforms, has given him new insights into recent events. He also discussed the rise of amateur footage and how Black storytellers should be supported by the film industry.

“Monsters and Men” was inspired by the Eric Garner story, the dissemination of that video and the ensuing protests. How would you say the events of the last few weeks are different?

We now have widespread participation brought on by the fact that many people were unemployed and at home. If you were working 12-15 hour shifts in previous events, it’d be harder to go to the protests and engage. It would be harder to watch that thing people would be telling you to watch. You have literally the entire world’s global market shut down, but the only thing that seems to be continuing is unemployment and the killing of Black men and women. We’re at home and have to watch those eight minutes and 46 seconds [the length of the George Floyd video] and the time to respond to it that I don’t think we had at this level of widespread participation before. I bet you a lot of people who had heard of Eric Garner or Philando Castile, but probably didn’t watch the video. Of course there were many protests for them. But now, people were being paid to stay at home, and told it was safer to go outside. That has been a recipe for people who always wanted to engage and didn’t have the time for it.

In the movie, Anthony Ramos’ character wrestles with whether or not to upload footage he recorded of police killing an unarmed Black man. How do you think that conundrum might unfold now? 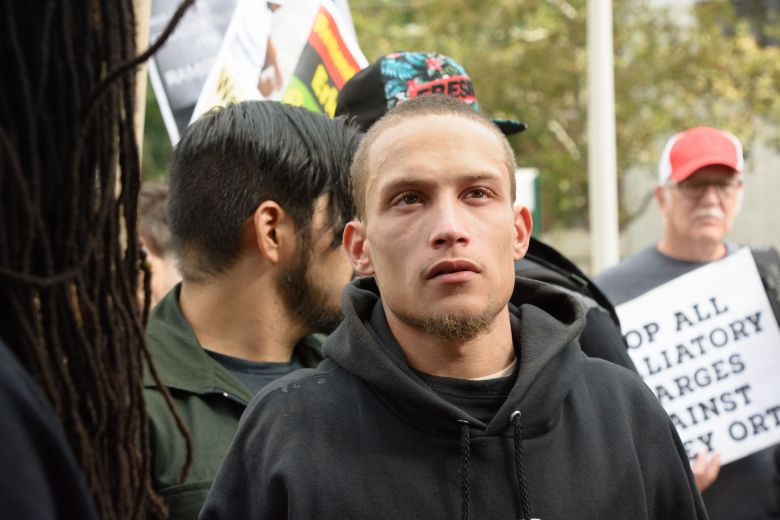 What did you learn about the nature of amateur footage from building a movie around it?

What was so significant about the George Floyd event in particular was that the camera was truly objective. It wasn’t shaking, it wasn’t moving, it wasn’t provoking the police officers or trying to tell a story of its own the way a body camera would. It was steady; it was still. You just watched this unfold in a way you can’t say for other videos. It was clear in the video that he wasn’t resisting arrest. Here’s a man doing everything right and he’s still getting killed.

If I was a bystander and seeing that, I would want to stand still and keep the camera steady as much as possible. That doesn’t mean you can’t hear my voice telling the police officer to please stop; it doesn’t mean I couldn’t ask somebody else to record while I’m recording to get various angles; it doesn’t mean I can’t call 911. We have the power to pull out our cellphones and record as long as we aren’t interfering with the arrest. I think it can be a deterrent in some cases for police officers escalating a situation. Obviously that wasn’t the case for George Floyd, but it can be used to save lives. Right now, we live in a culture where everything is being recorded and scrutinized. This is definitely the time to pull out our cellphones.

It’s sort of a similar situation to what’s happening with Colin Kaepernick. You have a small contingency of African Americans, Latino, and Asian police officers who have spoken up and want to speak about this issue from within, but they’ve been silenced. Now, their voices are being respected but still hushed. Colin’s still without a job. The same thing is happening. They need a collective thing to happen at this point to make some headway there. It’s tough to know what the future holds. Laws obviously have to change. When a kid goes into a school and shoots it up, immediately things are put into place to try to keep it from happening again. I wish that we had a similar response not only in the police force but within the communities. As with COVID, we have to flatten the curve. The speed with which Black men and women are being killed by police is outrageous. It just pops up in a way that just doesn’t happen in other places. Those police officers stories need to be brought to the forefront, to put a real coalition in place, and make sure these police officers are truly heard. Similar to John David’s character, many of these officers risk losing a lot by doing that. The same union designed to protect them is set to protect the officers that have just been charged. It leads to silence and complicity than action.

What do you want people to get from the film in the context of this moment?

I think the movie shows you that silence is not the answer and each individual has a choice to make about that. We knew it was going to lead to difficult conversations, but that was the purpose of the film. In our society, if someone disagrees with you, you minimize them from your feed, block them, not hear them out. That’s a very dangerous place to be, because then you surround yourself with only people who think like you. We need to hear and understand each other so we can have an approach to move past this. To me, I thought if people leave the theater asking what happened to Anthony’s character, then we’ve done our job. That leads them to discover people like Ramsey Orta or Philando Castile’s girlfriend. We’ve forgotten about them. We just move on.

There has been a dramatic increase in conversations about the need to support Black storytellers in recent weeks. What would you like to see come out of that?

Look, no one’s going to question Ang Lee doing any movie in any genre with any type of cast. He’s just a great filmmaker. He can have Black people, Asian people, it doesn’t matter. It’s just that he’s making great movies. There’s this assumption that Black filmmakers can only do Black content. We can make all sorts of content. We want to tell our stories, so primarily those stories will be within the black and Latino communities, but it’s not limited to that. I think it will be important to open up opportunities for filmmakers who want to tell universal stories and may not necessarily want to focus on social issues.

At the same time, Black stories aren’t going to go away, but we have to figure out how to make them fresh and relevant moving forward. We have to challenge ourselves to tell stories in ways that haven’t been done before. We can’t label ourselves. Where is the first Black-led “Gravity” space movie? Give me an opportunity to make my black Kubrick movie. Where’s our black “Italian Job” or Black “Thomas Crown Affair”? That’s where I’m looking to go — positive images of black folks. It shouldn’t all be negative. A lot of our stories get reduced. We have a lot of love stories, suspense stories, movies we can make that don’t get made. We have to knock down the wall to play in these spaces.

“Monsters and Men” is now streaming for free on Apple TV, Google Play, FandangoNow, and Vudu.