After striking gold with Normal People, Hulu is collaborating with the show’s creative team again to adapt Sally Rooney’s 2017 debut novel, Conversations with Friends, into a 12-episode limited series. With Normal People director Lenny Abrahamson and writer Alice Birch taking the lead, and BBC Three coproducing, the stars are aligned for another streaming sensation.

“Sally Rooney perfectly and beautifully captures the complicated dynamics of relationships in her stories,” Hulu’s vice president of content, Beatrice Springborn, said in a statement, per Entertainment Weekly, adding that the platform is “honored” to bring another one of Rooney’s works to life, especially after the “overwhelmingly positive response” to Normal People.

Much like Normal People, Conversations with Friends is all about the complicated nature of modern relationships—their messiness, their ambiguity, and the many forms of love and dependency. Rooney’s 2017 novel follows two Dublin-based college students, Frances (the narrator) and her ex-girlfriend-slash-best friend, Bobbi, as they become romantically intertwined with an older, sophisticated married couple in their 30s. The connection between the two pairs begins when journalist Melissa profiles Frances and Bobbi for their poetry, but transforms into a friendship (and then more) when the friends start spending more time with Melissa and her husband, a handsome actor named Nick. Next come riveting conversations over dinner and wine, group vacations with friends in France, late-night emails, and full-blown affairs.

Rooney has described the book as a “coming-of-age story,” but also noted the significance of its setting around the post-2008 economic crash in Dublin. “[Even] though all the characters are completely fictional and their exploits are very much figments of my imagination, the world that they live in was and is very similar to the world that I was living in as I wrote the book,” she told PBS NewsHour. 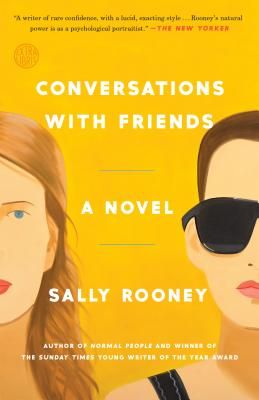 This early in the game, no release date has been announced yet. We don’t even know when the show will go into production, given the delays and postponements across the entertainment industry due to COVID-19. As a general reference for timing, we could look to Normal People, which began filming on May 27, 2019 and premiered roughly 11 months later on April 29, 2020. But we’ll await the official announcement from Hulu on when the cameras will start rolling.

Casting choices are also unknown at the moment. It wouldn’t be surprising if the crew tapped fresh talent like they did for Normal People, which starred newcomers Paul Mescal as Connell Waldron and Daisy Edgar-Jones as Marianne Sheridan. If the Conversations with Friends series reaches Normal People levels of popularity, no doubt its leads will be instantly propelled into stardom like Mescal and Edgar-Jones were.

What we do know of the crew, however, is that Normal People‘s director, Abrahamson (also the Oscar-nominated filmmaker behind 2016’s Room), will be behind the camera. Producer and screenwriter Birch, who has a writing credit on almost all the Normal People episodes, according to EW, is also attached to Conversations with Friends. She’s also worked on Succession and 2016’s Lady Macbeth starring Florence Pugh.

Watch this space for updates.

Related posts:
June 30, 2020 TV and Movies Comments Off on Sally Rooney’s Conversations with Friends Is Coming to Hulu—Here’s What to Know
Celebrity News:
Bronny James and Zaire Wade: Who Is the Better Recruit?
See How Celebs Reacted to Kanye West Announcing His Run for President
Olivia Munn Celebrates Turning 40 In A Gorgeous Bikini & 4 Other Times She Stunned
From Meat Smokers to Boombox Speakers, These Are the Products We're Using This Summer
Kim Kardashian West Is Still Proving Her Kanye West Soulmate Theory
Recent Posts
This website uses cookies to improve your user experience and to provide you with advertisements that are relevant to your interests. By continuing to browse the site you are agreeing to our use of cookies.Ok