Phillip Schofield and Holly Willoughby were joined by Nick Ferrari and Camilla Tominey for This Morning’s View. Together they were discussing the stories which had made the headlines – one of with was Donald Trump suggesting Meghan Markle could run in the next presidential election and Phillip questioned whether this came into the Duchess of Sussex’s plan to have a “quiet life”.

Phillip read out the comments which came from an interview with Fox News on Tuesday night when Trump was asked what his take was on Meghan setting with Democrat operatives and possibly running in the next election.

The former US president said: “Well I hope that happens because if that happened I think I’d have an even stronger feeling toward running

Camilla responded first and said: “That is certainly a presidential race I want to watch!” 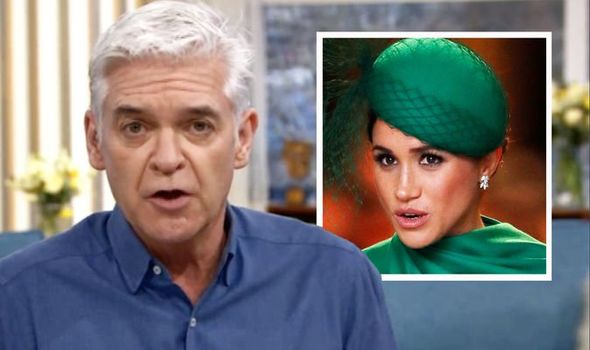 “But also, doesn’t she want a ‘quiet private life?’” The presenter remarked and Nick could be heard laughing in the background.

“And equally, she doesn’t want much scrutiny and I would suggest if she thinks the British press have been rather intrusive when it comes to her being a Royal, if she was an actual presidential candidate, I mean, my goodness a great deal would be unleashed on her.

“So, I think she would have to think very carefully if she is plotting a track to the White House.”