Much like your sleep paralysis demon, The Masked Singer refuses to die. We’ve barely had time to recuperate from the harrowing experience that was season 2 (that demonic Egg haunts me nightly), and the show is somehow already back for season 3. This time, we’re dealing with criminally insane atrocities like the Banana (a costume that has categorically ruined fruit for me), the Kitty (who makes the felines in Cats look normal), and the Taco (which is honestly the most upsetting thing I’ve ever seen). As someone who spent this morning writing about Miley Cyrus popping a pimple on Cody Simpson’s back, I’ve seen some sh*t.

Like, can we please just discuss this for a moment? 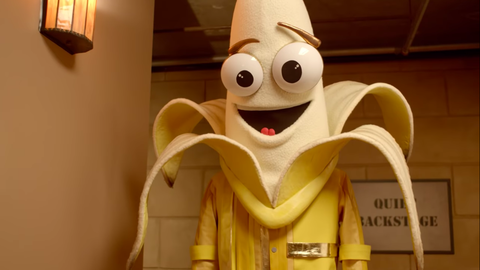 I’D LITERALLY RATHER CHILL WITH VOLDEMORT.

Anyway, in the event that this is your first time watching The Masked Singer, (1) turn around and run away now, it’s not too late for you, and (2) allow me to explain how the show works. Each week, several “A-list celebrities” (read: C-list former celebrities who need to fire their agents ASAP) shove their poor, broken bodies into a fleet of truly terrifying costumes and then take the stage to sing—and in some unfortunate cases—dance. The show’s judges, Robin Thicke, Jenny McCarthy, Ken Jeong, and Nicole Scherzinger, then stoically attempt to guess who is “inside” the mask (shudder) and almost always have no idea what the f*ck they’re talking about.

Because my therapist told me confronting my fears is the best way to deal with them, I’ve created a weekly tracker to, um, track who gets unmasked each week. Join me, please—I can’t go through this alone again.

The Person Behind the Mask: Tom Bergeron

Great news: The Taco’s reign of emotional terror has come to an end and it is now safe to eat your favorite food. I can’t pretend that watching Tom Bergeron’s lost soul emerge from that sinister tomato head wasn’t a hazard to my well-being, but at least he’s no longer trapped in a sea of lettuce and cheese.

The Person Behind the Mask: Dionne Warwick

I don’t know if this is simply a result of The Masked Singer increasing its cursed hold on my brain, but I actually think the Mouse costume is extremely cute and I’m alarmed she was unmasked. Not as alarmed, however, as I am to find out that Dionne Warwick’s PR team signed off on this show.

The Person Behind the Mask: Tony Hawk

After taking the stage and performing “Friday I’m in Love,” which, let me be clear, I WAS NOT IN LOVE WITH, the Elephant ripped off his own head and revealed himself to be, um, professional skateboarder Tony Hawk. Please respect my privacy at this time, because I’m simply not sure what’s happening right now and I might be in the midst of an existential crisis. If you don’t hear from me next week, it’s likely because I’ve taken refuge in the remains of Tony’s hollowed-out elephant costume, thx.

The Person Behind the Mask: Chaka Khan

Staring into Miss Monster’s one eye for the past few weeks has been completely traumatizing, but not gonna lie: I’M GONNA MISS THIS FLUFFY FRIEND. Join me in waving goodbye to the only costume on this show that was actually kinda cute.

The Person Behind the Mask: Drew Carey

The Llama turned out to be comedian Drew Carey, who emerged from that decapitated head looking more confused than ever. Like, I’m pretty sure he’ll never be the same after this. If you, too, are worried about Drew Carey’s emotional health after being shoved into a llama carcass for days on end, please find the nearest available candle and form a prayer circle in his honor.

WEEK ONE: THE ROBOT

The Person Behind the Mask: Lil Wayne

Wait, I’m sorry, is The Masked Singer actually going to feature real celebs this year? Because I, for one, was shook when the Robot metaphorically gave birth to Lil Wayne. Turns out, he chose the Robot costume because his kids told him to, which, MY HEART. I was not prepared for The Masked Singer to make me this emotional, dammit!

Tune in next week for another thrilling and alarming reveal, because yerp, we’ll be updating this post in real time.

Related posts:
March 12, 2020 TV and Movies Comments Off on So, Uh, [SPOILER] Was Unmasked as the Taco on ‘The Masked Singer’ LN
Celebrity News:
Jamie Lee Curtis Says a Minor Plastic Surgery Led to Her 10-Year Opioid Addiction
Mr Motivator held at gunpoint in terrifying home invasion in Jamaica
Dianne Buswell ‘would love to be with Joe forever’ as she talks marriage plans
Johnny Carson Said His Final Goodnight as Host of ‘The Tonight Show’ 30 Years Ago
Peter Pan's Arc in 'Rescue Rangers' Compared to Bobby Driscoll Tragedy
Recent Posts