It sure felt that way in the relatively banal second episode, “Far From Home.” Whereas the Season 3 premiere of “Star Trek: Discovery” was expansive and eye-opening, this one relied on well-worn tropes. How funny that, when all was said and done, neither Saru (Doug Jones) nor Tilly (Mary Wiseman) really even asked much about what exactly brought about the relatively lawless environment they found themselves in. Sure, they discovered the Federation is “gone” from this sector of space, but to what avail?

Discovery landed on an icy world dotted with pockets of artificial atmosphere populated largely by Coridan miners. (Coridans, or sometimes Coridanites, are a species featured in the “Original Series” episode “Journey to Babel” and also an episode of “Star Trek: Enterprise.”) But when the big bad of the episode, Zareh, mentioned “The Burn,” they didn’t inquire as to exactly what the burn was or why it would cause the Federation to collapse. (Though they do know that dilithium — the critical substance that suddenly ignited all over the galaxy — is now in short supply and more valuable than ever.)

“Far From Home” is essentially a standalone episode of the kind we would have gotten on “Star Trek: Enterprise”; an installment designed to have some nice character moments while saving the big production budgets for later on.

Instead of Discovery undertaking a dramatically different journey than Burnham, the ship and its crew crash-landed on a relatively similar planet, covered with stormy skies and icy landscapes. Lt. Detmer (Emily Coutts) showed off some fancy flying to get them through the asteroids surrounding the planet and in for a soft landing on a glacier. Take that, Tom Paris — Detmer didn’t get her entire crew killed when crashing onto an ice planet!

“Someone buy that woman a drink… and a neuroblocker for me,” joked Commander Reno (Tig Notaro). What an MVP Notaro has become on this show. She is a joke machine, enlivening every scene she’s in with her rat-a-tat insult humor. Unfortunately, as this episode proves, she’s often the only exciting thing in her scenes and injects life where you’d barely feel a pulse otherwise. Her best moment? When a crewman tells her his name and she immediately replies, “I’ve already forgotten that.” 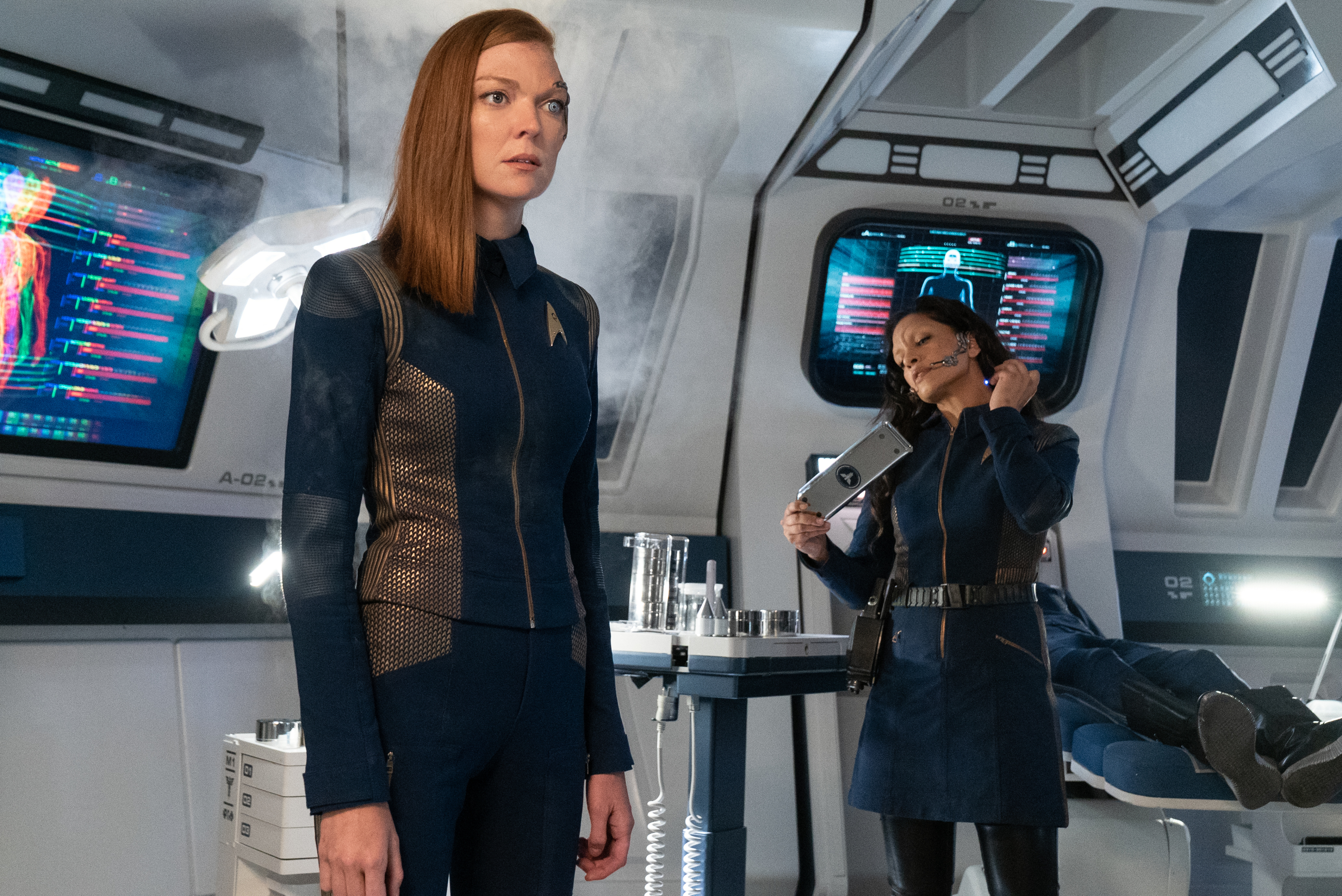 Lt. Detmer is not herself.

Getting their bearings, most of the crew spring into action to affect repairs, while Capt. Saru and Ensign Tilly decide to venture out and ask for help from the locals — whoever they may be. Stamets (Anthony Rapp) is finding it hard to be the engineering whiz we all know him to be. His partner Dr. Culber (Wilson Cruz) refuses to discharge him until he can spell “My partner brought me out of a coma and all I got is this lousy T-shirt” but inevitably he springs into action, if a bit creaking while doing it.

Man, it’s great to see Stamets and Culber together as a couple again, stronger and more united than ever. This relationship is really meaningful, and it’s wonderful not to have them pulled apart by Klingon agents in disguise or mycelial spore networks or other plot contrivances. And Reno gives Stamets some good advice: He doesn’t always have to be his best self. After all, he was in a medically induced coma before you could even say “wormhole to the future.” Gotta admit this is a refreshing message for “Trek” — back in the “Next Gen” days, the Enterprise crew members were so perfect, so motivated to be their best at all times that there was little room for someone like a Reg Barclay, who always stood out like such a misfit.

But Detmer is especially unwell. Maybe her cybernetic implants got a jolt when traveling through that wormhole, but how her marked predicament plays out will be interesting to see unfold.

Meanwhile, Saru and Tilly walk across the planet surface. Sigh. It’s another alien world, like “Avatar” or Charles Soule’s “Star Wars: Anakin & Obi-Wan” comic, that’s basically just a Yes album cover with weird rocks floating in the sky due to gravitic anomalies. The duo find their way to the local watering hole, a saloon where a group of Coridans eke out some R&R when they’re not slaving away to pay off their courier — couriers like David Ajala’s Book in the previous episode being a lucrative profession now that few in the galaxy actually travel through space. But this courier, Zareh, is a nasty bastard. He’s basically keeping the people of this planet hostage by serving as a flesh-and-blood company store, giving them everything they can’t make or grow — “which is everything.” 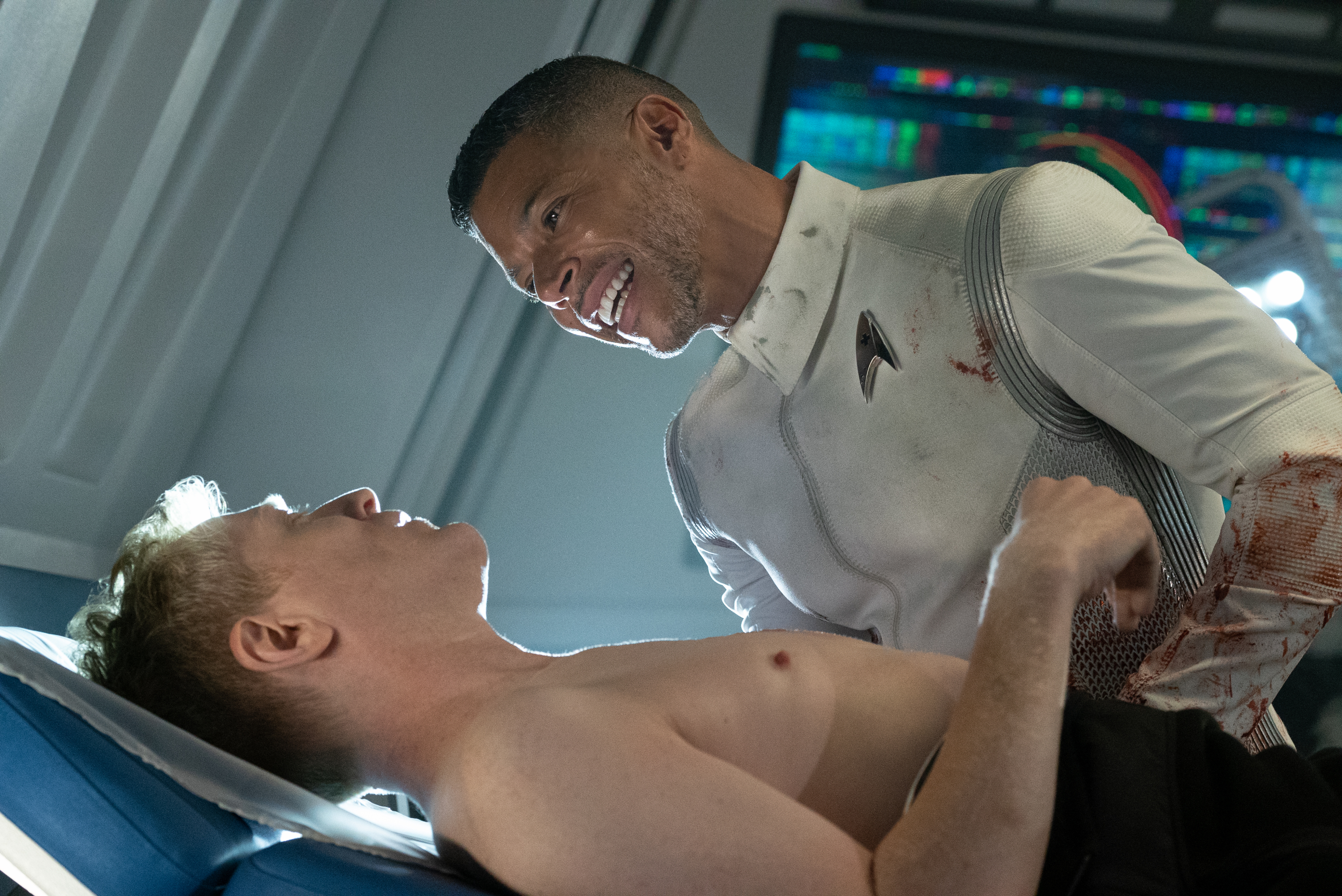 Stamets and Culber are back together — and finally back to some sense of normalcy.

Zareh walks into the bar with the sound of spurs. He holds Tilly and Saru at phaserpoint — really odd, slow-acting phasers that seem like a step backward for the 32nd Century, and the only real “future tech” we see here other than “programmable matter” and a personal transporter — hoping to force them to bring him to their ship, which he can then loot. They’ve basically got no choice because “parasitic ice” is about to crush the ship.

Luckily, they turn the tables on Zareh, thanks to the sudden arrival of Georgiou (Michelle Yeoh). Her combat skills are no match for this courier and his thugs. An “Agents of Shield”-worthy generic action scene ensues, and so they make it back to the ship in one piece — Zareh forced to make it on his own in the icy wilderness — and, just as the parasitic ice seems ready to crush the Discovery for good, Burnham shows up in Book’s ship to rescue them with a tractor beam.

Plus, she has some big news to share: She’s already been here for a whole year, so she has a lot to catch them up on. Hmm. It would have been fun to see this crew discover more about their strange 32nd Century reality themselves, but Burnham’s sudden arrival — though certainly welcome because Sonequa Martin-Green makes every scene better — probably means we’re skipping ahead of those revelations.

No other way to cut it, “Far From Home” is a disappointment. The Season 3 premiere made it seem like the future really would be a startlingly different place; an arena for a whole new level of, ahem, discovery. This episode suggests we’re in for just more of the same.

Luckily, far better episodes are ahead.

Related posts:
October 23, 2020 TV and Movies Comments Off on ‘Star Trek: Discovery’ Season 3 Review: So Where Did the Crew End Up in Episode 2?
Celebrity News:
Universal sued by actor Faizon Love for cutting Black stars out of ‘Couples Retreat’ publicity posters
Alexandra Daddario Heats Up the Beach in a Bikini in Hawaii
Courteney Cox Recreated That Iconic Friends Moment for Thanksgiving
Diego Maradona's Lawyer Demands Investigation, Says Death 'Criminal idiocy'
Here’s How To Change Your TikTok “For You” Page To See Different Kinds Of Videos
Recent Posts
This website uses cookies to improve your user experience and to provide you with advertisements that are relevant to your interests. By continuing to browse the site you are agreeing to our use of cookies.Ok