George Lucas’ Star Wars franchise is one of the most successful and beloved in the entertainment world. Having produced six wildly popular movies that have earned him a net worth of $5.8 billion, Lucas will go down in history as one of the greatest storytellers of all time.

Star Wars was largely inspired by numerous movies in the drama and adventure genre that preceded it, with Lucas got many of his ideas from pirate and romance films of the 1940s. This inspiration can be seen in several aspects of the Star Wars universe, from its costumes and storyline to its themes and action sequences.

One of the most notable props in the Star Wars franchise is the lightsaber, a laser-powered sword ubiquitous with all Star Wars media. Yet, while every fan knows of the lightsaber’s design and power, few know of George Lucas’ true intention behind creating them. 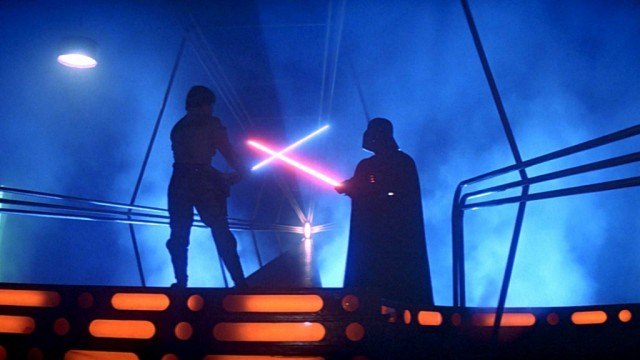 Before Star Wars was conceived, Lucas had a desire to produce a film adaptation of the iconic Flash Gordon serial, according to Pop Matters. However, he was unable to obtain the rights to the intellectual property and decided to create something of his own. Fascinated by the space dramas of his time, he created a treatment for the original Star Wars, which would become the premise for Episode IV — A New Hope.

Although studios were initially skeptical about Star Wars and invested little money in its production, the film was a massive success and spawned five more movies that formed the sequel and prequel trilogies. Although there were initially supposed to be nine Star Wars films created by Lucas, he stopped at six.

Lightsabers were unique weapons used by those with the ‘Force’

While many characters within the Star Wars universe were involved in the conflict between the Galactic Empire and the Rebel Alliance, only a few of them were able to use lightsabers. Lightsabers were sword-like weapons consisting of plasma blades created by kyber crystals, exclusively used by Jedi Knights and Sith Lords. Every other soldier, criminal, or civilian in the Star Wars universe relied on blasters to protect themselves, making lightsabers an extremely important weapon for users of the “Force.”

Lightsabers were symbols of a ‘simpler time when honor ruled’

On the surface, lightsabers may seem like archaic weapons in comparison to the futuristic blasters other characters in the Star Wars universe used. However, there’s more to their design than most viewers may know.

Inspired by pirate films and romantic films of the 1940s, Lucas was infatuated with the romantic side of fighting, and wanted to create an “elegant weapon, from a more civilized age.” On the Star Wars Youtube page, Lucas explains the reasoning behind the weapon’s creation.

“There was chivalry, and honor, that sort of thing,” Lucas said. “In developing a group of peacekeepers… I needed a weapon that was appropriate… It was more a symbol of a simpler time, of a time before the Empire had taken over—a time when honor ruled. So it more a symbol than it was an actual weapon in the movie.”

Wanting to stick with his original idea of having the Jedi fight with swords, Lucas created lightsabers to give the weapons a futuristic, technological edge, while making Jedi defensive, rather than offensive fighters.

Related posts:
September 16, 2020 TV and Movies Comments Off on 'Star Wars': George Lucas Reveals His Surprising Intention Behind Creating the Lightsaber—'It Was a Symbol of a Simpler Time'
Celebrity News:
Jordyn Woods, 23, Goes Instagram Official With Karl-Anthony Towns, 24, In Romantic Beach Pics: ‘I Found You’
Simon Cowell admits he is ‘terrified’ of son Eric being bullied as he details the name he almost gave him
Drew Barrymore Reunites with Ex-Husband, Tom Green, After 15 Years of Not Speaking
Piers Morgan: GMB star hits out at BBC following Andrew Neil step down ‘Treated shabbily’
Taylor Swift’s Gift For Gigi Hadid’s Baby Girl Is The Sweetest Ever
Recent Posts
This website uses cookies to improve your user experience and to provide you with advertisements that are relevant to your interests. By continuing to browse the site you are agreeing to our use of cookies.Ok