As the pandemic ravaged entertainment companies’ stock prices and cash reserves, NBCUniversal CEO Jeff Shell had the temerity to state the obvious: Going forward, it makes sense for his studio to consider VOD as an option for some movies. Since movies that don’t debut on VOD is how the debt-ridden AMC makes money, CEO Adam Aron responded with apoplexy, refusing to play Universal’s movies after theaters reopen.

Is this any way to save the movie business?

Coronavirus didn’t create this crisis. Much of the energy that feeds this drama is the now-ancient history of the 1948 Paramount Consent Decrees that separated the studios from their theaters. While it removed horizontally integrated monopolies, it created two intrinsically linked industries forced to share a common goal. And ultimately, capitalism has its way: No partnership is more important than each industry’s independent concerns, and shareholder value.

Today, studios and exhibitors still bring movies to a paying audience, but approach it from wildly different perspectives. Studios have multiple revenue streams; theaters have butts in seats, and buttered popcorn. Studios want the flexibility to take their movies to other platforms if that’s the better business decision; exhibitors leave a lot of patron data on the table — and charge studios access for what they do collect.

And now, the pandemic. It’s wreaked havoc on every sector of the industry, but for studios and exhibitors it’s accelerated the topic of exploring VOD distribution (studios want an open marriage, exhibitors say over my dead body). Some observers believe theater closures will push the exhibitors and studios to finally abandon the 90-day exclusive agreement for one with shorter windows; if that’s the case, it won’t be a smooth transition. The new urgency of this debate has forced every crack and fissure between these organizations to the surface.

Exhibitors are very different from their studio partners. Both groups are largely comprised of white men, but theater owners tend to reflect mainstream tastes and fairly conservative politics. (Imagine a Hollywood executive signing off emails like one Cinemark staffer: “Oh give thanks to the Lord, for He is good, for His steadfast love endures forever. Ps 107:1.”) As a whole, this group prefers PG-13 to R ratings, and worships Dwayne “The Rock” Johnson and all things Disney. They largely work out of their midwest headquarters, whether that’s Kansas City (dominant AMC, with 8,000 screens), Dallas (Cinemark and Studio Movie Grill), New Orleans (Southern Theatres), Milwaukee (Marcus Theaters), Scottsdale (Harkins), Memphis (Malco), or Knoxville (Regal). It’s hard to imagine most of these folks circulating at world-class film festivals. The buyers who do attend are there for their specialty screens.

Exhibitors and studios meet annually at the four-day, top-down affair that is CinemaCon in Las Vegas. By day, studios present the trailers and talent for their upcoming titles to more than 4,000 theater owners seated inside the darkened arena of the Colosseum at Caesar’s Palace. By night, there’s opportunities to schmooze with the studio distribution executives who represent an increasingly slim slice of conglomerates owned by AT&T, Comcast, Sony, Viacom, and Disney. Like the name suggests, CinemaCon preaches the sanctity of the theatrical experience — but it’s also the home of closed-door meetings that often host negotiations and other contentious conversations.

And ultimately, that’s what studios and theaters do most. Their awkward business partnership doesn’t lend itself to conversations; it’s designed for constant, often-rancorous negotiations over rental splits. They initially favor studios and increase for theaters over time, which is why they love long-term blockbusters, from “Avengers: Endgame” to “Bohemian Rhapsody.” Theater owners will fight to the death to keep their exclusive 90-day window, but why can’t studios move poor theatrical performers to another platform right away, and extend the on-screen life of the ones that play? The exhibitors’ argument: Exclusivity is the only way moviegoers will keep coming to theaters.

Universal has long been a leader in wanting to accelerate the VOD window. During negotiations over “The Irishman,” Netflix’s Scott Stuber (a former head of Universal production) played mediator in trying to reach an accommodation on shorter windows. But the chains are not a unified group, and talks broke down.

Meanwhile, independent exhibitors, film festivals and distributors are taking a different tack: They pulled back from competition to pool their best practices and intelligence into launching a virtual cinema business. And when they did, they discovered a shared ability to reach cinephiles even when hunkered in their homes.

“People are feeling the challenge of this moment,” said New York Film Festival director Eugene Hernandez during the April 23 webinar “Virtual Films and Conversations,” hosted by the Woodstock Film Festival. While Film at Lincoln Center closed its two cinemas, Hernandez said they are still finding revenue through virtual cinemas.

“It’s daunting to think about how long this could go on and what damage it could do,” he said. “The work Magnolia and other distributors are doing has given us hope and revenue. As hard as this moment is, there are glimmers of hope in the camaraderie and collaboration that is happening right now.” 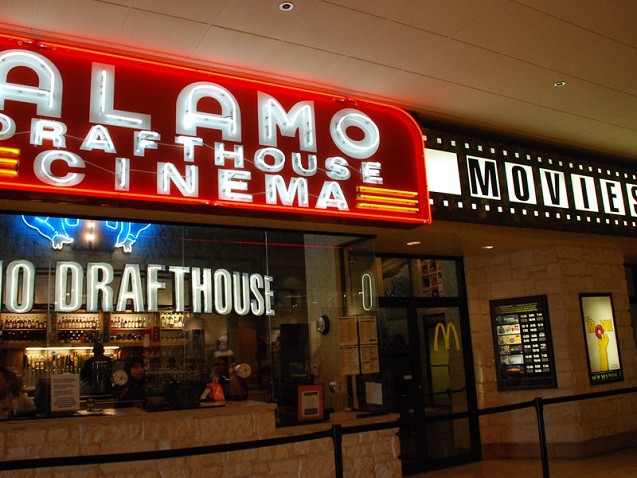 If the studios and theaters were still aligned, the whole film industry picture would be very different. The theaters would not be abandoned and marooned, with only one way to make a living. Studios and theatres would have long shared the same ecosystem, reading data and innovating best practices for the ideal ways, times, and platforms to reach the consumer.

The Department of Justice is now in the process of ending the Consent Decrees, and some believe that this could represent an opportunity for a studio to buy a theater chain and break this impasse.  It would allow for all the experiments, and show what could work for both sides of the equation, with more marketing and data synergy.

Like their existential threat that is Netflix, it would allow a studio to engage the consumer from end to end. (Netflix, an MPAA member that was never part of the decrees, also bought the Paris Theatre in New York last year.) “If you lose the consumer at the point of purchase,” said one marketing executive, “you don’t know where they went. Whose customer is it? My customer or yours? It’s insane.”

Of course, the idea of entertainment companies buying theaters fill some exhibitors with horror. “It makes me nervous,” said one independent. “The theaters that are studio-owned could get the premiere and special treatment. I want access to everything. If it’s out there, I want a shot at it. There’s a long history of getting left out and shut out. It’s the age-old battle-cry of the independent.”

For now, theaters around the country are planning soft June openings with studio “classics” like the Harry Potter and Indiana Jones series, gearing up for the broader July 17 opening of Christopher Nolan’s time-bending thriller “Tenet.” Theaters are truly grateful for Nolan’s largesse. “He’ll have every single screen,” said one Imax executive. “Warner Bros. could slide it back a month or two or three. If that works, a steady stream of movies like ‘A Quiet Place’ is behind it.”

San Antonio’s Santikos theaters reopened with enhanced safety protocols and seat-spacing last weekend, selling $5 tickets for “The Hunt,” “Bloodshot,” “Trolls World Tour” and “The Invisible Man,” all of which are also available on VOD. Everyone is holding their breath that moviegoers will feel safe, and will not get sick. “Everybody is scared,” said one exhibitor.

What if, like the independents, the major studios and theater chains were all on the same side? In France, the entire movie and television system feeds each part of the production-distribution-exhibition chain in a circular and supportive way. They’re in it together. There’s a lot to be said for that. The time for reflection and change — reframing the conversation about doing something different, that is in the best interest of the consumer — is now.

“We’re going to weather this, whether it last six months or two years,” said Tim League, who runs the 350-screen Alamo Drafthouse chain. “We will come back. I refuse to die because of this.”

Related posts:
May 5, 2020 TV and Movies Comments Off on Studios Would Win in a War Against Theaters, but Isn’t There a Less Painful Victory?
Celebrity News:
Succession's Brian Cox reveals Jeremy Strong engineered viral profile
Novak Djokovic is extremely disappointed to be deported from Australia
Lucy Mecklenburgh flaunts baby bump in swimsuit as she kisses fiancé Ryan Thomas
50 Cent’s GF Cuban Link ‘Sick of’ Trolls Accusing Her of Having Plastic Surgery
Bob Saget Revealed COVID-19 Battle Days Before Death: 'It Does Not Feel Good'
Recent Posts