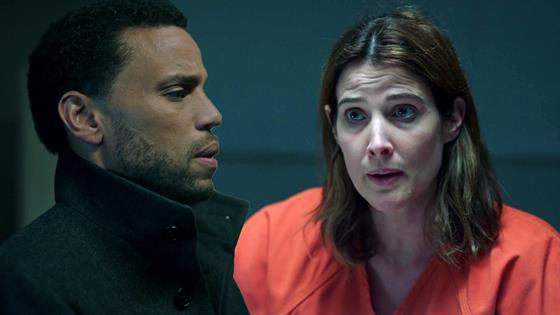 It’s “All Hands on Dex” for the Stumptown season one finale.

“I have nothing to hide,” Dex tells Cosgrove and Lee (Fiona Rene) in the interrogation room.

What’s her connection to Thomas Junes (Eric Ladin)? As Dex explains, he was friends with Benjamin Blackbird (Sam Marra). When she went to talk to TJ, “there he was, lying dead on the floor.”

But there’s an issue: Dex doesn’t remember how she got there. And what’s this about a crowbar?

“You guys think I killed him,” she tells the police.

Seems Dex can’t stop digging herself in deeper. Was she drunk? Was she framed?

“He was dead when I got there,” Dex maintains.

“But why were you there?” Cosgrove needs to know.

In the episode, Dex takes matters into her own hands after she finds herself the prime suspect in the murder. Meanwhile, Hoffman may lose everything if he continues to help Dex while she’s under investigation by the police. And then there’s Grey (Jake Johnson), who is attempting to work on his relationship with his estranged father when a familiar face from the past makes a surprise visit.

The Stumptown season one finale airs Wednesday, March 25 at 10 p.m. on ABC.