A review of this week’s Ted Lasso, “Lavender,” coming up just as soon as I find out that George Harrison has died…

Is Ted Lasso a good coach, or just a good person? Are the two mutually exclusive? This was occasionally a source of conflict a year ago, when Coach Beard or Nate would point out all the aspects of soccer football that Ted still didn’t understand, or suggest that the team’s good vibes wouldn’t matter if they didn’t win. But for the most part, Season One was on Ted’s side in the belief that making everyone associated with AFC Richmond feel better would eventually make the team play better.

Two episodes into this new season, that idea is already being challenged. Late in “Lavender,” Ted presses Dr. Sharon for her assessment of the program he’s built. In the efficient, detached, but polite fashion that has become her stock in trade, she acknowledges the wonderful atmosphere around the club, and how well everyone gets along with one another. But she also points out that the team remains winless, and invites Ted to come talk to her in a therapist/patient capacity.

In her brief time with the club thus far, so well delineated by Sarah Niles’ performance, it is clear that Ted Lasso the show deeply respects Dr. Sharon, even if Ted Lasso the character has issues with her. He’s made clear that he has a skepticism of psychology in general, but there is also a tinge of a very un-Lasso emotion in all of this: jealousy. Dr. Sharon was able to get through to Dani Rojas when Ted wasn’t. She speaks French and Spanish, and can communicate with several members of the team in ways Ted can’t. She is also totally immune to his charms, in a way that almost reshapes our perception of his persona. We know Ted well enough to assume he is just superhumanly empathetic and generous, but when he brings Dr. Sharon the same box of cookies he once used to woo Rebecca, the gesture now feels calculated and a touch desperate. Ted’s behavior and personality haven’t changed, but by giving him a foil who doesn’t readily succumb to his usual routine — and someone who is presented as admirable in her own right, if temperamentally very different from our hero — the show subtly alters our view of its title character. Ted’s still a good man, and his impulses to listen and help are sincere, but there’s also a degree to which they’re performative — where his natural inclination toward decency also has professional advantages, and Ted knows this.

Which brings us back to the key question of “Lavender,” and perhaps of this season: Is there a point at which Ted’s “man of the people” routine stops helping the team?

“Lavender” picks up essentially where “Goodbye, Earl” left off, with Jamie as the villain on the dating competition show Love Conquers All. To his surprise, he’s voted off the series — and, worse, finds out in his exit interview (with real-life British morning show hosts Phillip Schofield and Holly Willoughby) that Man City has released him from his contract for bailing on the team to do reality TV. Suddenly unemployable as either a footballer or a celebrity, Jamie has to beg Ted to return to Richmond, and Ted does not seem interested.

Since the bulk of my EPL knowledge comes from watching this series, I can’t speak to how realistic this would be. Given Jamie’s obvious talent, you would think that some club — even one of Richmond’s rivals in the lower league — would be willing to put up with his antics, or that he’d be able to make bank with personal appearance fees for quite some time. But the scenario presented to us is that Jamie has wildly overplayed his hand and no one wants him around anymore, making Ted his only hope. You may recall that Jamie was Ted’s main project in Season One. He wanted him to make the extra pass on breakaways, and to be less of a toxic element in the locker room. He envisioned building the entire offense around Jamie and Dani Rojas, and was upset when Rebecca (back when she was still trying to sabotage the club) sent Jamie back to Man City. With the team’s fortunes even worse than before — relegated to the Championship league, and without a single win so far — you would think a reunion with Jamie would make sense for all involved. But when Jamie approaches Ted at the pub, Ted turns him down flatly(*).

(*) Ted often keeps his history and pain hidden from the world, but he lets slip an interesting detail. When Jamie, whose father is a piece of garbage, asks about Ted’s dad, Ted suggests that his own father was a lot harder on himself than he was on Ted. Which might help explain why he is so devoted to making the people around him feel better about themselves.

The team isn’t winning, but Ted Lasso has a different definition of winning than how the official standings look. The team is tighter than it was before. Sam is now a leader, and briefly walks out of practice when he mistakenly believes that Ted is letting Jamie back on the team. (It is a classic sitcom misunderstanding, but also a quintessentially Ted Lasso kind, where the truth comes out almost instantly, everyone is friends again just as fast, and Sam is even happy to run laps as punishment for showing up his coach.) If all Ted cares about is keeping the current players happy, then this is the right call. If he also wants to get Richmond back to the EPL, then Jamie Tartt would seem a handy player to have on the roster.

Dr. Sharon may not know all the details of Jamie’s history with the team. But she is observant, smart, and good enough at her job that she’s able to get through even to a man like Ted, who seems deeply skeptical of both her and her profession. She points out the divergence between how well everyone is behaving and how well the team is playing, and the next time we see the players assembled for practice, a nervous Jamie is walking onto the pitch to rejoin them.

It’s possible that this was Ted’s master plan after all — to make Jamie feel doubly humbled before coming back — but his conversation with Sam suggests otherwise. No, Ted Lasso changes his mind because Dr. Sharon helped him change it, whether he wants to admit that or not. 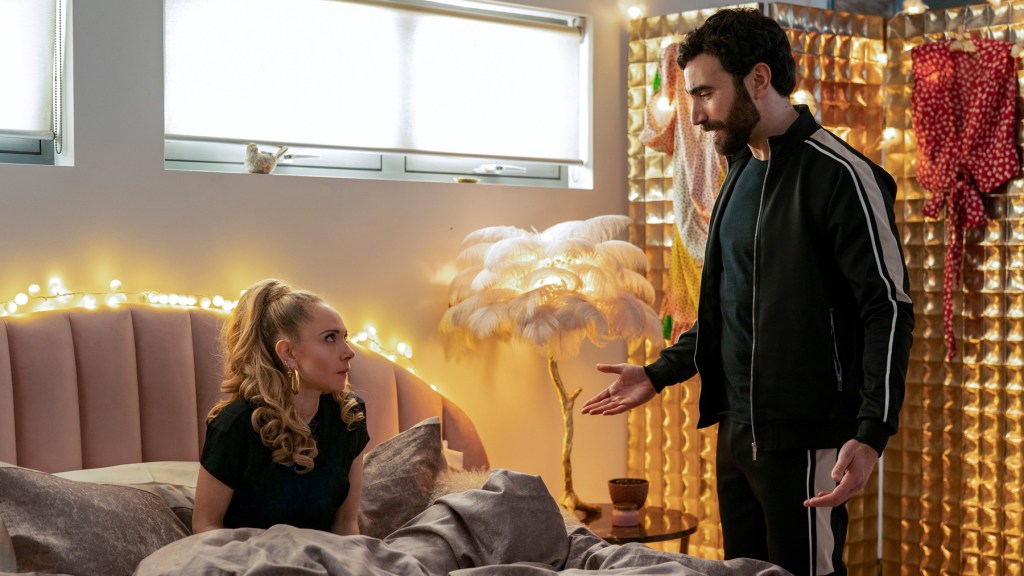 Juno Temple as Keeley and Ben Goldstein as Roy

* With Phoebe’s football season over, a bored Roy finally takes Keeley’s advice to try the studio analyst job. He is unsurprisingly great — and unsurprisingly profane — though the episode’s most amusing bit of Roy/Keeley business takes place back home. He walks in on her masturbating to a video on her phone. The obvious joke would be that she was watching a video of Jamie, who she’d just run into. Instead, we discover that she’s gratifying herself to footage of Roy crying at his retirement press conference. This is both a surprising punchline and one well suited to a show that’s all about having its characters get in touch with their emotions. And it has a great payoff later on when Roy, exultant in how well the first studio day went, sets up Keeley to watch the video again while he pleasures her. Even the famously stoic Roy Kent can sometimes recognize the value of other people seeing him shed a few tears.

* The episode’s title comes from Nate’s ongoing hazing of his poor replacement Will, who tries putting lavender fabric softener in the team’s laundry. In Season One, Nate was treated as one of the show’s biggest underdogs, but at the moment he’s coming across like the kind of guy who pulls the ladder up behind him, rather than leaving it there for guys like Will to one day climb too.

* Finally, another week, another Cheers joke, this time with Jamie saying he named the toy soldier Ted — but after Ted Danson, not Lasso.