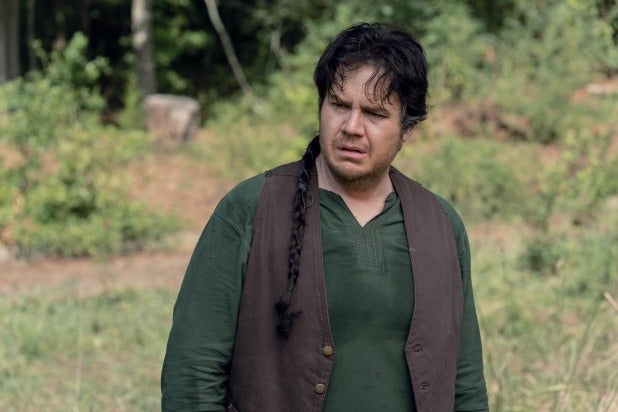 (We’ve got some spoilers ahead for the March 8 episode of “The Walking Dead,” as well as potentially the future of the series)

Things are heating up on “The Walking Dead” as another war begins. The Whisperers assaulted Hilltop this week, and next week’s episode will probably bring us an attack on Alexandria as well.

Which means that the Whisperer plotline is probably going to end by the time this season wraps up five weeks from now. The Whisperer story in the comics was always more of a cold war story, and the actual war part didn’t last very long compared to the tense parts leading up to it.

And the return of Eugene’s radio girlfriend, Stephanie — and the two arranging an in-person meeting for the first time — is a sign that yes, the Whisperers situation is getting close to its conclusion. Because in the comic book version of “The Walking Dead,” Stephanie is sort of the harbinger of the next big storyline after the Whisperer War.

We’ve got some spoilers here now for the comics and, presumably, upcoming seasons of the show. So if you don’t want to know anything about the future of “The Walking Dead,” you probably should leave now. If that’s you I’m not really sure why you’re even reading this article, honestly.

In the comics, that voice on the radio belongs to a woman named Stephanie, who befriends Eugene (Josh McDermitt) via the radio over the course of the conflict with the Whisperers before revealing that she belongs to a previously unknown group called the Commonwealth.

The Commonwealth is completely unlike any group we’ve yet seen on “The Walking Dead,” because they have an actual city of more than 50,000 people in Ohio. It’s an actual civilization, and not just an assortment of communities like the ones our heroes live in. The Commonwealth is a game changer, and very different sort of story than what we’re used to from “The Walking Dead” because it’s, so far in the books at least, more about diplomacy than war.

What’s more, there have been elements added to the TV version of “The Walking Dead” that were not in the books that we have long suspected were precursors to the Commonwealth plotline. Georgie, for example, was a big one, because she looked very similar to how the leader of the Commonwealth, Pamela Milton, is drawn in the comics. Likewise, we’ve suspected that the mysterious helicopter that took Rick (Andrew Lincoln) away early in season 9 also came from the Commonwealth, though for what purpose we still don’t know. There were more helicopter folks in “Fear the Walking Dead” last season, much to everyone’s surprise.

The Commonwealth story, then, could well bring certain odd plot threads — like Maggie (Lauren Cohan) leaving the Hilltop to travel with Georgie — back into the main story somehow. And whatever these standalone movies that will tell the rest of Rick’s story are could serve as preludes to the Commonwealth story getting going in “The Walking Dead” proper.

Showrunner Angela Kang and “Walking Dead” overboss Scott Gimple have been sprinkling in these bits for so long that it’s exciting to think they might be getting close to paying all that stuff off. The show had never really worked this way before, and I think it’s pretty cool.

If I had to guess about when the first in-person contact with Stephanie and the Commonwealth will actually happen, I’d say that the very last scene in the season 10 finale is a safe bet. That would be exactly the sort of cliffhanger that “The Walking Dead” creatives love to do — remember that time they had Negan murder a main character in a season finale but made us wait six months to find out who it was?

This obviously would not be nearly so dramatic, but it would be a solid place to let things linger during the break between seasons. And I really don’t think they would have Eugene and Stephanie set a date if they weren’t going to have that meeting before the end of the season. But hey, we’ll see soon enough. Only five more episodes in season 10.