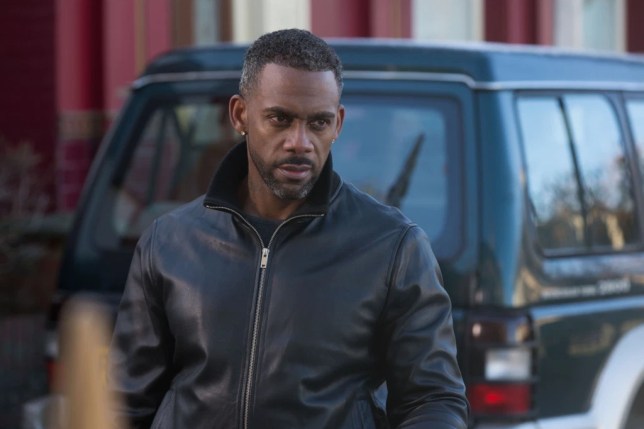 Vincent Hubbard (Richard Blackwood) receives a mention in EastEnders this week, a name which shocks Kim Fox (Tameka Empson) to the core.

Mitch Baker (Roger Griffiths) takes a cab booking for a man named Vince Hubbard in Monday’s (October 11) edition of the BBC One soap.

The booking renders Kim speechless, but she’s not the only one stopped in her tracks, as Phil Mitchell (Steve McFadden) is equalled stunned.

Phil is adamant that Kim leave the matter alone, but Kim is naturally unable to do so, and thus she tracks the booking to the Walford East.

Matters get more confusing when she finds a children’s entertainer in a costume claiming to be Vince.

When she confronts him she spots his wallet, and becomes convinced that it belongs to her Vincent! However, the entertainer hightails it out of therefore before she can be certain.

Phil makes it clear Kim needs to stop digging for information or there could be serious consequences. Denise (Diane Parish) pleads with Kim to leave the matter alone.

But just who is Vincent? And why is Kim so concerned?

Who is Vincent in EastEnders?

Portrayed by Richard Blackwood, Vincent was first introduced to the BBC One soap back in 2015 amid the show’s 30th anniversary celebration week, when Dominic Treadwell-Collins was producer.

Vincent appeared on several occasions during the week of special episodes, including in a flashback episode, before returning as a regular character in April of the same year.

The character was a part of several storylines throughout his three-year stint in the serial drama, and forged a memorable relationship with Kim and, later, daughter Pearl.

Star Richard, who is now in Hollyoaks decided to leave the BBC One show, and Vincent ultimately made his final appearance in 2018.

Is Vincent dead in EastEnders?

It’s currently unknown as to whether or not Vincent is dead.

Shortly before his exit in 2018, Vincent was in desperate need of cash, and thus he told a police man that he would give him information on the heist carried out in Walford earlier that year in exchange for money.

The policeman agreed, but made it quite clear that he and his family would have to going witness protection. Vincent attempted to get Kim to leave with him, but she refused, and ultimately she convinced him to stay.

Vincent, therefore, got into the police car and told the policeman he wasn’t leaving the Square. However, the officer was working for gangster Aidan Maguire (Patrick Bergin), and thus pulled a gun on him.

The soap cut away before Vincent was shot, thus leaving the character’s true fate unknown.

Will Kim finally get the answers she’s looking for as Vincent’s storyline is revisited?

EastEnders continues Monday October 11 at 8:05pm on BBC One.

Related posts:
October 11, 2021 TV and Movies Comments Off on Who is Vincent in EastEnders and is he dead?
Celebrity News:
Garrett Hedlund Arrested For Public Intoxication After Split From Emma Roberts Report
A Place In The Suns Craig Rowe speaks out on health concern amid property drama
Kim Kardashian's Touching Tribute To Late Fashion Designer Thierry Mugler
Nick Cannon Pens Sweet Tribute to Late Son Zen: Missing My Little Dude
Jennifer Coolidge got a guest spot on Thank U, Next by DMing Ariana Grande
Recent Posts