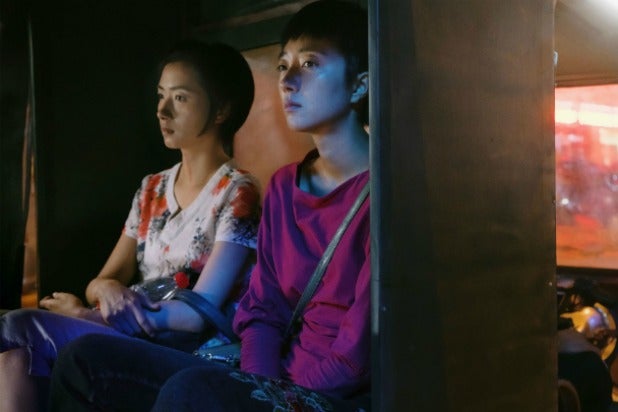 After touching on financial precarity with “Sorry We Missed You,” social unrest with “Les Miserables” and refugee plight with “Atlantics,” the Cannes Film Festival put current issues on hold and rolled into a weekend full of girls, gangsters and guns.

As soon as the brute force punch of Nicolas Winding Refn’s “Too Old to Die Young” had time to bruise over, the bloody festivities picked right back up for Saturday’s premiere of “The Wild Goose Lake” — a stylish Chinese crime thriller that feels an awful lot like a Refn movie funneled through Middle Kingdom sensibilities.

Or maybe that’s the other way around, because the rap on director Diao Yinan back home is that he’s the most American-minded contemporary Chinese filmmaker… but that could just mean that he likes to play around in genre.

Diao struck gold with “Black Coal, Thin Ice,” his offbeat neo-noir about a drunken ex-cop obsessed with an unsolved case and the top prize winner at the Berlin Film Festival in 2014, but his messier follow-up “The Wild Goose Lake” will almost certainly not have similar luck at Cannes this year. This follow-up is bit less impactful and a lot more indulgent, but it can also be an awful lot of fun in spots.

We follow Zhou (Hu Ge), an underworld gadfly who heads out on the lam after killing a cop. With seemingly the entire police force and criminal underworld hot on his tail, Zhou decides to hide out in a chintzy lakeside vacation town, where he enlists local prostitute Aiai (Gwei Lun Me) to help him get word back to his wife.

As with most films of this type, the pleasures arrive less in the originality of the story than in the way the way it’s told. The hooker with the heart of gold, the cops closing in, the lack of honor among thieves — the classic building blocks of the genre are all there. Still, if these tropes are familiar to all, that also makes them malleable, so Diao gets to put his own spin on some very familiar tunes.

Some of his larger choices don’t quite work. The film’s fractured chronology and flashback structure render the narrative somewhat opaque, while the move to clad the legions of police in plainclothes never fully creates the ambiance of paranoia and mistrust he hopes to achieve. On the other hand, many standalone sequences are infused with gory brio, including a motorcycle chase marked by a shocking decapitation, and a fight scene that ends with one assailant impaled by an open umbrella.

With film’s artful arterial splatter, those Refn comparisons come roaring back — not least of all because Diao is equally interested in bathing each sequence in neon glow. Though they share significant aesthetic similarities, the two filmmakers employ that style towards very different ends: Refn’s impossibly polished images and pristine compositions fundamentally reflect an aesthetic of luxury, whereas Diao’s point of view is deeply tied to the working class.

Put it another way: Refn is a high-art fetishist, a director who uses neon tones to separate and elevate his chosen subjects, to consider them as unique and independent objects in the tradition of intellectual haute couture. Diao, on the other hand, is more of an earthy sensualist, interested in the full body experience of slurping down noodles in a dive bar and the kitschy pleasures of middle-aged men line dancing to Boney M. in disco shoes. Both approaches have value and have found their place.