How the world was paralysed in 66 days: In two months, the killer virus has swept the world at devastating speed with more than 153,000 reported infected as the EU goes into lockdown with France shutting the Eiffel Tower and Spain closing its borders

Countries across Europe were placed into lockdown yesterday in a desperate attempt to stem the soaring tally of coronavirus cases after the Continent became the new ‘epicentre’ of the global pandemic.

Restaurants, shops, cinemas and cafes have shut for the foreseeable future as French Prime Minister Edouard Philippe branded the virus the ‘biggest health crisis in a century’.

In Spain, the government declared a state of emergency as the death toll there rose by 120 and the number of confirmed cases leapt from 1,500 to more than 5,700 in 24 hours.

Meanwhile, Poland shut down all its airports – forcing thousands of stranded British tourists to head out of the country by car. 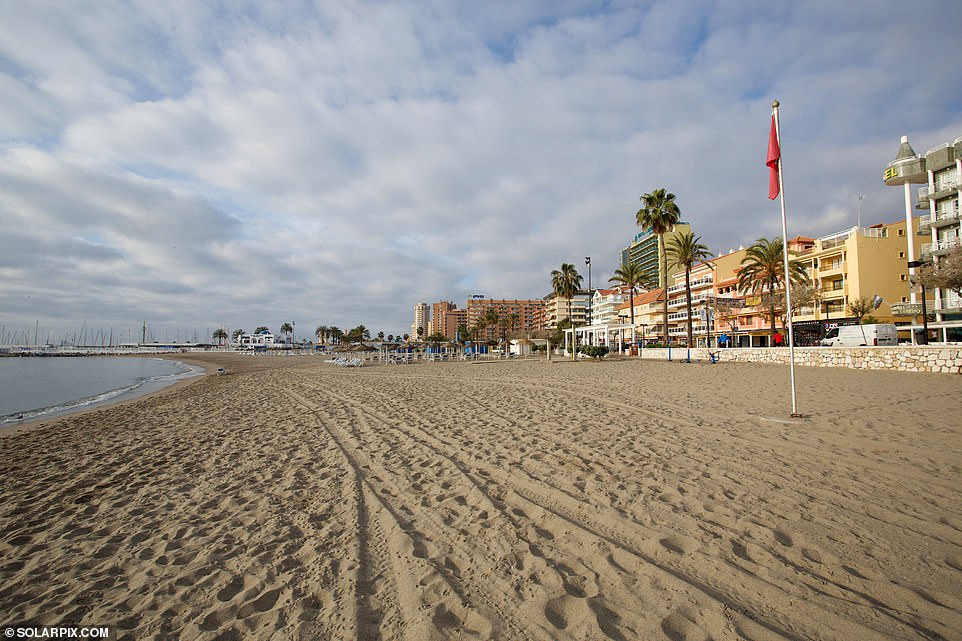 TOURISTS on the Spanish Costas for some warm winter sunshine have been warned: ‘Don’t act as if you’re on holiday.’ Beaches are being closed along the Costa Blanca which covers resorts like Benidorm and the Costa del Sol 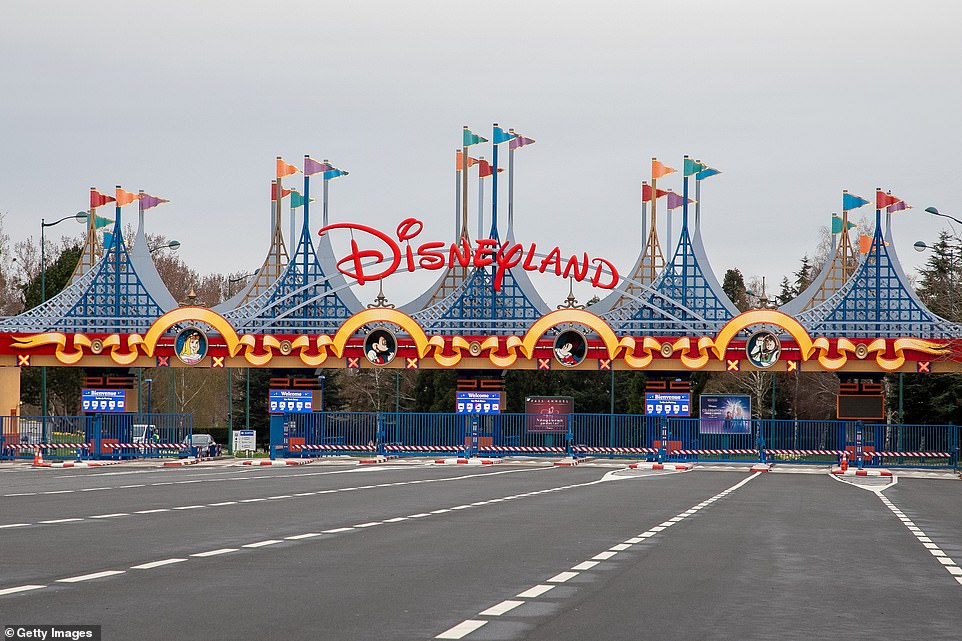 general view at the main entrance of Disneyland Paris resort and parks as Disneyland Paris joins Disney parks closures amid coronavirus concerns on March 14. The park is closing its doors to visitors due to Covid-19 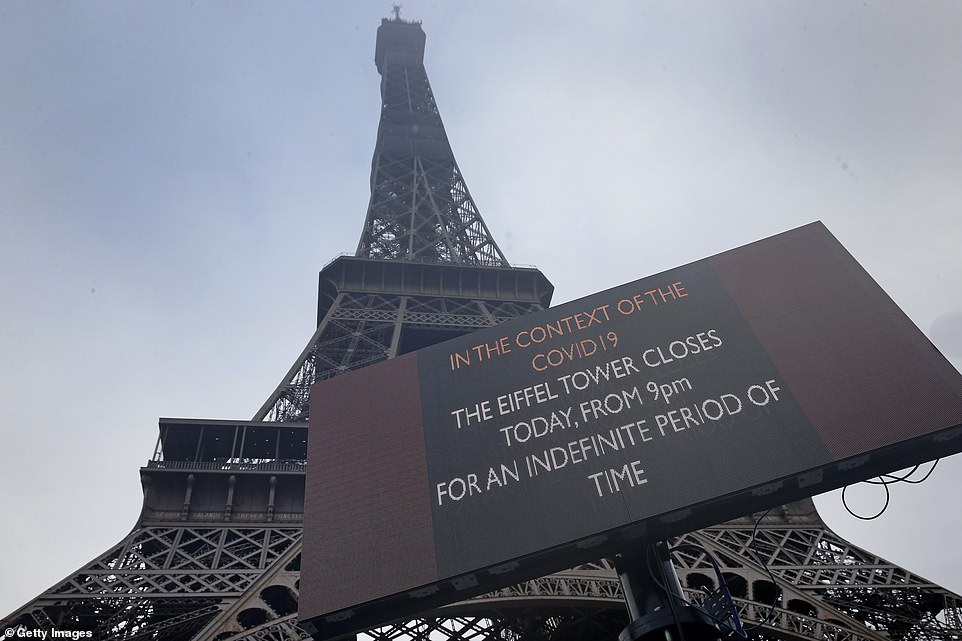 A sign informing people that the Eiffel Tower is closed is displayed on March 14, due to a sharp increase in the number of cases of coronavirus declared in Paris and throughout the rest of the country 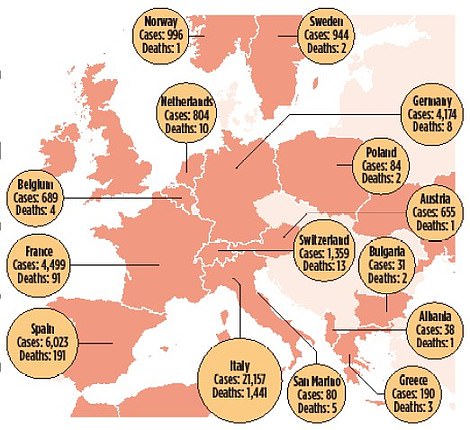 Across the Continent, hundreds of tourist attractions and sites were closed including Disneyland Paris, the Eiffel Tower and Barcelona’s Sagrada Familia.

In Spain, police patrolled popular beach resorts such as Benidorm and the Costa del Sol urging people to stay inside. There were 3,000 new diagnoses in the capital, Madrid, and health authorities stopped testing those with only mild symptoms in the city.

The state of emergency means millions of Spanish people – and 300,000 British expats – will be allowed to venture outside only to commute to work, buy food and medicine, or to go to hospital.

Sarah Cowie, a British expat living in Spain, said: ‘I’ve been living in Granada since September and am now preparing to leave the country as it goes into lockdown.

‘It’s very, very real and I hope I can get on my Tuesday flight.’

Eva Marie, from Leicester, who is studying in Madrid, said she was ‘spending the day watching Netflix in my apartment, following the news and packing my case in hopes my flight to the UK tomorrow will still go ahead’.

Police in Benidorm had run-ins with British holidaymakers who had spent much of the day drinking on the streets after bars and clubs were shut.

In Poland, British tourists were in a race against time as the country announced that all planes and trains out of the country would be stopped from midnight last night.

As the Foreign Office advised against all but essential travel to Poland, many travellers were fleeing for the border in taxis after their flights were cancelled. 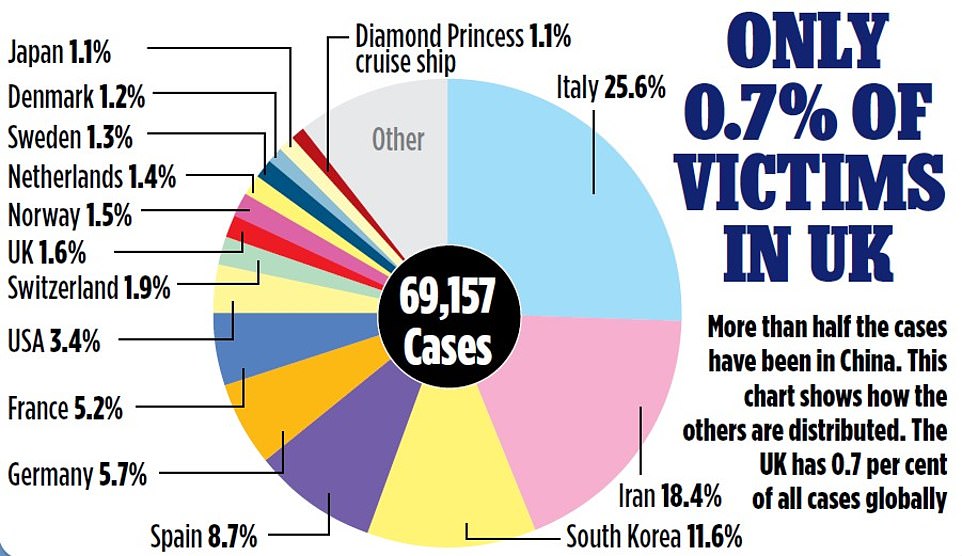 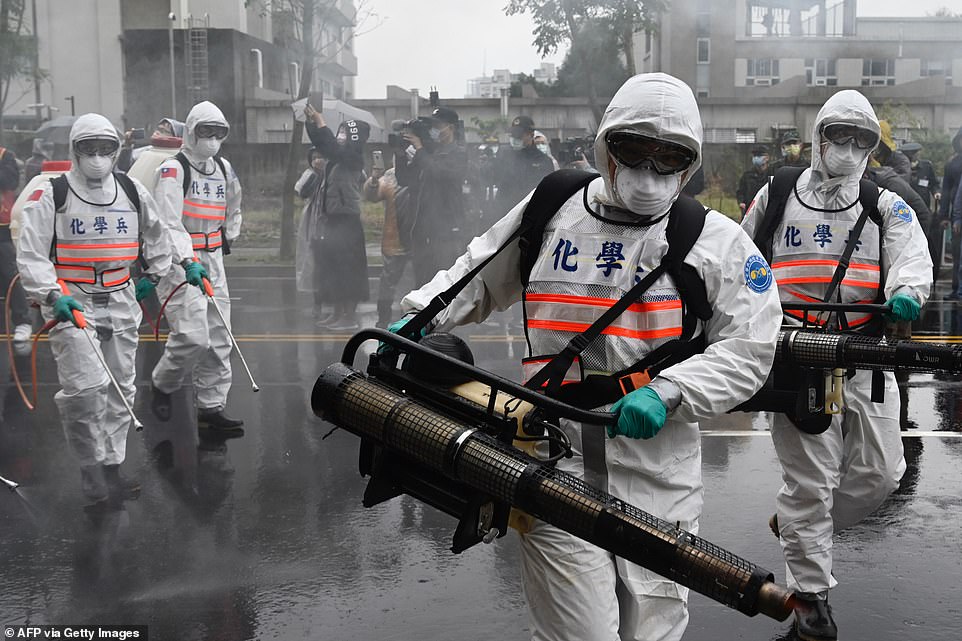 Soldiers from the military’s chemical units take part in a drill organised by the New Taipei City government to prevent the spread of thecoronavirus, in Xindian district in Taiwan, March 14 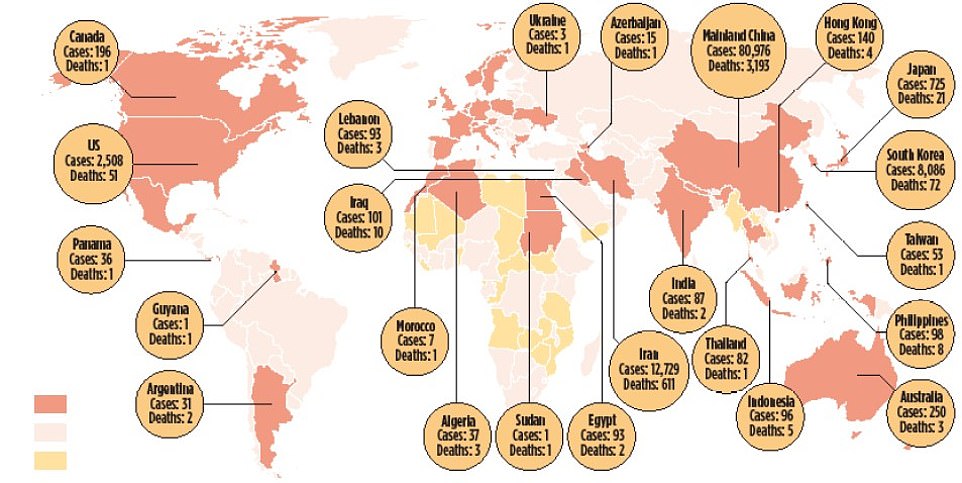 Global map shows total number of Covid-19 cases and death tolls. In many countries, the number of infections is set to rise

One group of Britons on a two-day stag party in Krakow were told by their travel reps that they should leave the country by midnight.

Charlie Leather, 32, from East London, told The Mail on Sunday: ‘We’ve been told we need to leave the country otherwise we won’t be able to get out. We’ve paid £1,400 to get two seven-seater cabs to Berlin, where we’ve booked flights out on Monday morning. It’s going to take us five hours and forty minutes to get there.’

Ruth Robertson, from Inverness, who flew in to Krakow on Thursday, said she had been left stranded.

‘At about 10 o’clock on Friday night our receptionist told us that all of the restaurants and shops were closing.

‘In the morning, we were told they were closing the hotel and we would have to leave immediately.

‘We went to the airport because we had nowhere to go. They’ve cancelled our flight for tomorrow and we’ve phoned British Airways but they are offering no help.

‘I came with five friends for a weekend, just for a visit, and we were told on the way out that our travel would be safe.’