The last time multi-Grammy Award winner Billie Eilish performed in Perth, it was at Fremantle Arts Centre to a sold-out crowd of 3400, before the term “COVID-19” had entered anyone’s vocabulary. 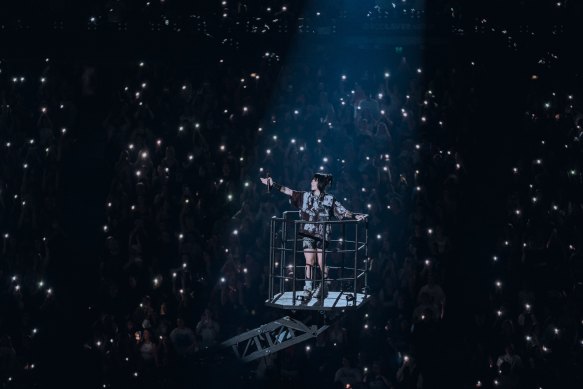 Billie Eilish performs her latest tour Happier Than Ever to a sold-out crowd.Credit:Matty Vogel

But on Thursday night the alternative pop sensation finally returned to Perth for the final leg of her Happier Than Ever world tour to a 15,000-strong crowd at RAC Arena.

The 20-year-old kicked off with hit bury a friend from debut album When We All Fall Asleep, Where Do We Go?, jumping with a burst of energy from underneath the stage.

Her lyrics are almost drowned out by the crowd as they sing them back to her — the energy she creates in just the opening notes a clear sign she is already cemented in history as one of her generation’s musical icons.

Eilish is joined on stage by a minimalistic backing band made up of her brother Finneas, on guitars and piano, and drummer Andrew Marshall.

The next three songs performed come from her latest album, including one of her more well-known pieces Therefore I Am.

“How are we doing Perth?” she calls out. “This is my second-to-last show of this year, this whole tour is coming to an end, and I’m spending the last moments with you.”

As Eilish sings, dream-like images flash behind her, from giant spiders to sharks with glowing eyes, creating an eerie but whimsical effect that harmonises with the overall feeling of her music.

Then, in a moment of calm, Eilish picks up a guitar and sits down to sing i love you, Your Power and TV alongside her brother, who she tells the audience is her best friend and “the most talented person I know”. 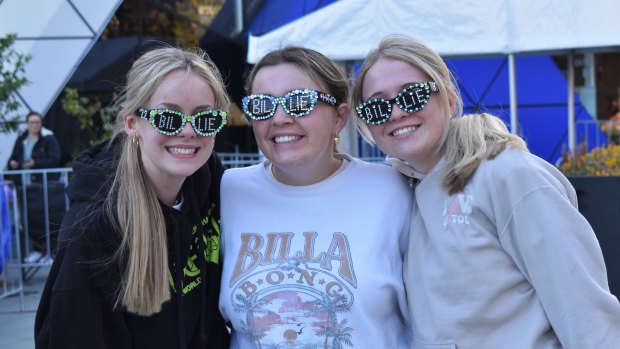 It is the quietest the crowd has been all night, watching with rapt attention and hanging on to every word.

Eilish later steps onto a platform which is lifted by a crane, carrying her over the heads of the audience as she sings earlier hits Ocean Eyes and Bellyache.

At all moments, Eilish comes across as down to earth — playing her childhood videos across the big screen, taking a moment to pause and use her inhaler before commenting on the smoke sitting over the city from prescribed burns, and using her songs to promote climate action.

Overcome with emotion, she said she was sad the tour was ending and that “every waking moment has been this tour … now I have to go and write an album for you”.

The concert finished with dramatic flair, as cult classic bad guy and the tour’s namesake Happier Than Ever end the show accompanied by a cannon-blast of white confetti.

Eilish will be back to perform her last concert of the world tour at RAC Arena on Friday night.