Land Labrador! Abby the dog steers a bodyboard across pool to fetch her ball and avoid a soaking

This clever dog has found a novel way to fetch her ball from a swimming pool without getting soaked.

Footage shows Abby, a black Labrador from Manasquan, New Jersey, steering a bodyboard in the pool in her backyard to rescue her toys from the water.

The clever dog, who was adopted from Jersey Shore Animal Shelter, wiggles around on the board to make it move across the water towards the ball. 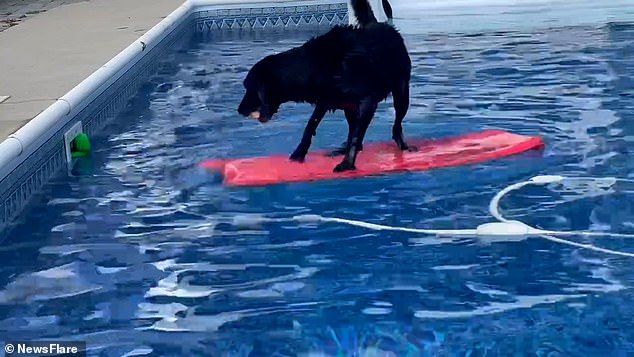 Abby, a black Labrador from Manasquan, New Jersey, has developed the ability to steer a bodyboard in the pool in her backyard to rescue her toys from the water 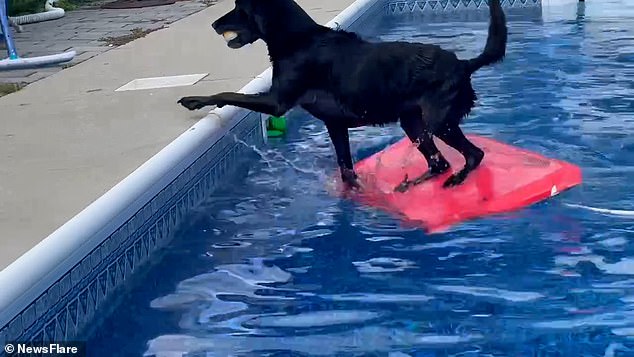 In the sweet clip, Abby, who is believed to be 12 years old, plucks the balls out of the water and shows off her surfing skills as she makes her way to the edge on the board.

She hops out of the pool and places the ball beside her owner, hoping for it to be thrown into the water once again.

Owner Elizabeth Keenan said Abby had suffered ‘severe abuse and neglect’ at the beginning of her life.

She said: ‘She was only fed non-food objects; cigarettes, foam dirty paper plates. When she was brought to a kill shelter she was malnutritioned, shut down and fearful of humans. However, she remained very sweet.

‘My family adopted her days before she was set to be euthanized.’

When the family brought Abby home she showed signs of depression and would cower in fear – yelping when they tried to pet her. 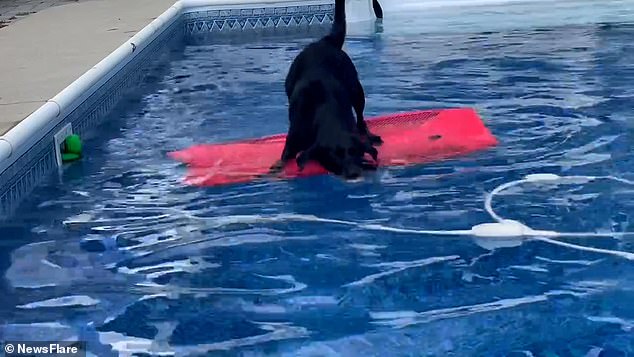 Abby’s owner Elizabeth Keenan shares clips of the clever dog’s tricks on social media, much to the delight of her followers

The vets explained to the family that her reaction was due to her anticipating pain.

Elizabeth began teaching the pooch how to be a dog again through activities involving a ball.

‘I needed to work on building her confidence,’ she said. ‘Abby is not food motivated. But she loves a ball.

‘I began slowly introducing her to the pool by gently placing her on a bodyboard using the ball as a reward. 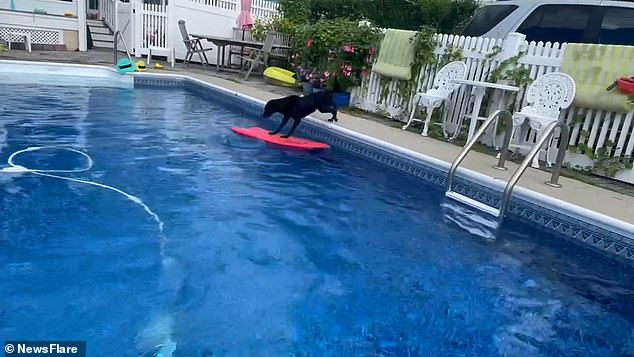 ‘She learned that the pool was a fun activity. Abby learned how to manipulate the board by shifting her weight to get the board to move in order to retrieve her ball. Abby has been bodyboarding since.

‘Since we’ve adopted Abby, my father was diagnosed with Parkinson’s disease.

‘Abby has been his best friend, providing him with comfort, lots of laughs and tons of love.

‘Abby sleeps with him every night and rarely leaves his side unless she’s bodyboarding.’

Elizabeth has been sharing clips of the clever dog’s tricks on social media, where she has built up an enthusiastic following.