The heartbroken parents of a baby boy given just weeks to live due to a rare gut condition have never been able to see him at the same time – due to coronavirus social distancing rules.

Luke Evans, 30, and wife Sophie, 27, have been forced to take it in turns spending time with four-month-old son Arlo in his final days due to hospital regulations during the Covid-19 pandemic.

The tragic tot was born six weeks premature in January via emergency c-section and was diagnosed with rare genetic condition, Kleefstra syndrome, which caused his gut to rotate, at birth – later suffering from bowel tissue death before a severe cardiac arrest which left him with brain damage at four weeks old. 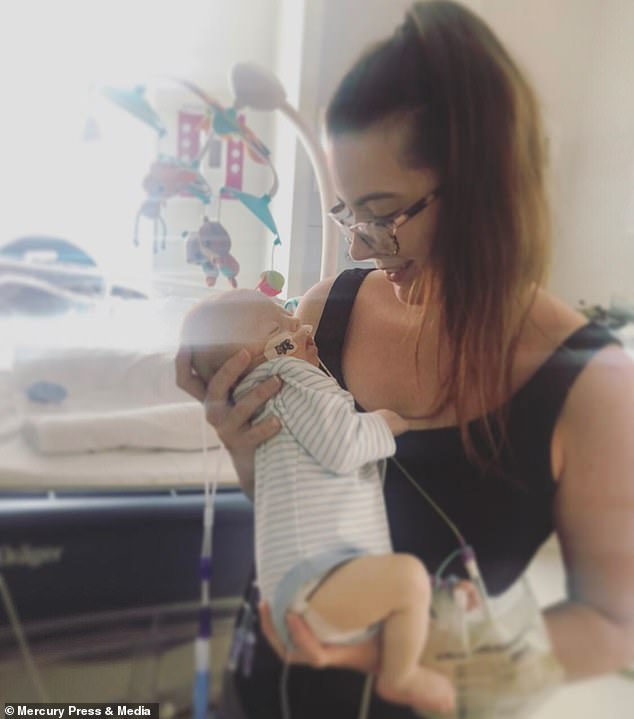 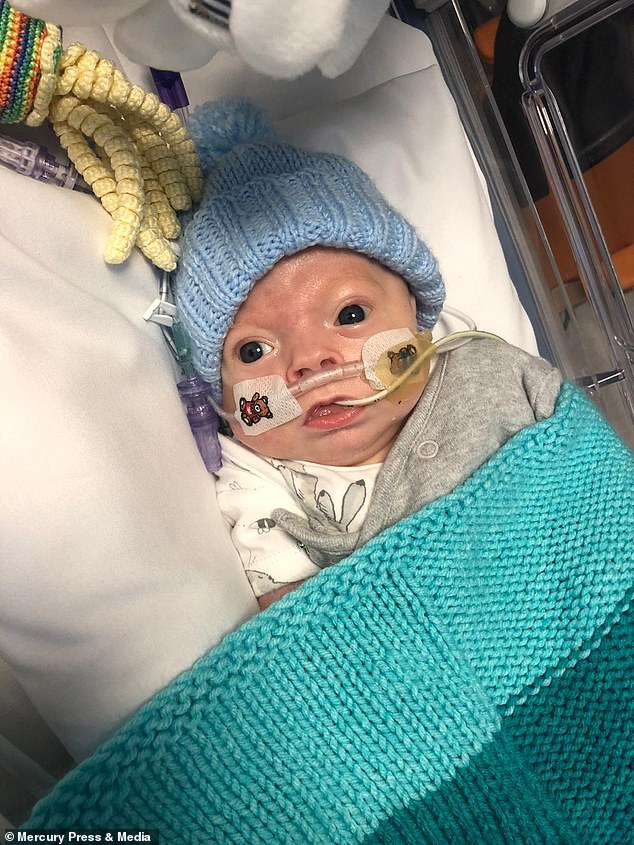 The rare genetic condition caused his gut to rotate, at birth – later suffering from bowel tissue death before a severe cardiac arrest which left him with brain damage at four weeks old

His parents, from Ashton-under-Lyne, Gtr Manchester, are devastated they have never been able to spend time together in the same room with him due to government policies in place at Manchester’s St Mary’s Children’s Hospital, which state only one parent can visit their child in a neonatal intensive care unit at a time.

Dad-of-three Luke said: ‘Arlo was born premature so he was underweight, meaning that we couldn’t take him home, then he got worse at four weeks old.

‘Now we don’t know how long he’s got and it’s awful that we can’t take him home.

‘It’s one parent at a time allowed in so we can’t even spend time together just the three of us.

‘It’s sad because we should be having family time.

‘We haven’t even been able to take him outside and he’s never been home.

‘Me and Sophie wanted to take him for a walk together so he could see the sky for the first time but we can’t even do that.

‘This whole situation is ridiculous. It’s such a frustrating time.

‘We do understand why there are restrictions because it will safeguard and benefit some children, but the logistics in hospitals don’t seem to make sense.’

Due to his rotated gut, Arlo developed a serious bacterial condition called Necrotising Enterocolitis (NEC) which caused part of his bowel tissue to die and left him needing one six-hour operation and one three-hour operation to remove part of his intestine.

At four weeks old, the tot also suffered a severe cardiac arrest due to a high temperature and struggling to breathe, leaving him with global brain damage.

Arlo has never spent time outside of hospital and other family members were banned from visiting him at St Mary’s Children’s Hospital.

WHAT IS KLEEFSTRA SYNDROME?

Kleefstra syndrome is a rare genetic condition that affects many parts of the body.

* US National Library of Medicine

In his final precious days, while only one parent at a time is able to spend time with him in hospital, the other stays at a hotel nearby.

He was transferred to Royal Oldham Hospital to receive end of life care as doctors say nothing more can be done for him.

His two siblings, aged five and seven, have only met him twice before the social distancing restrictions become more stringent.

Luke said: ‘His two sisters aren’t able to spend time with him, they’ve only seen him once or twice just before things got really serious.

‘It’s too high risk to take him anywhere, so we’re just waiting for him to die peacefully.

‘The only time we’ll get to spend time together the three of us is if he’s dying imminently, but the hotel is a 20 minute drive from the hospital so we might not even make it. 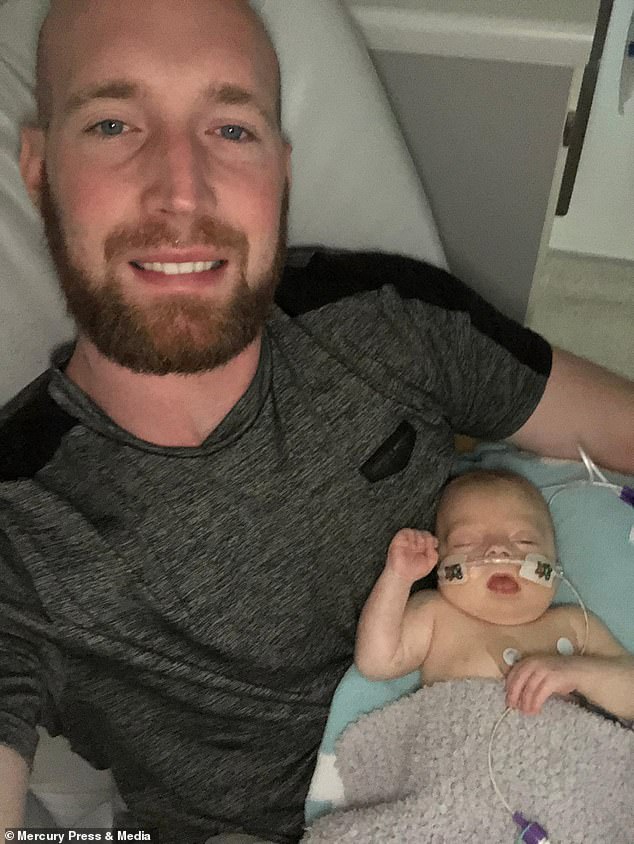 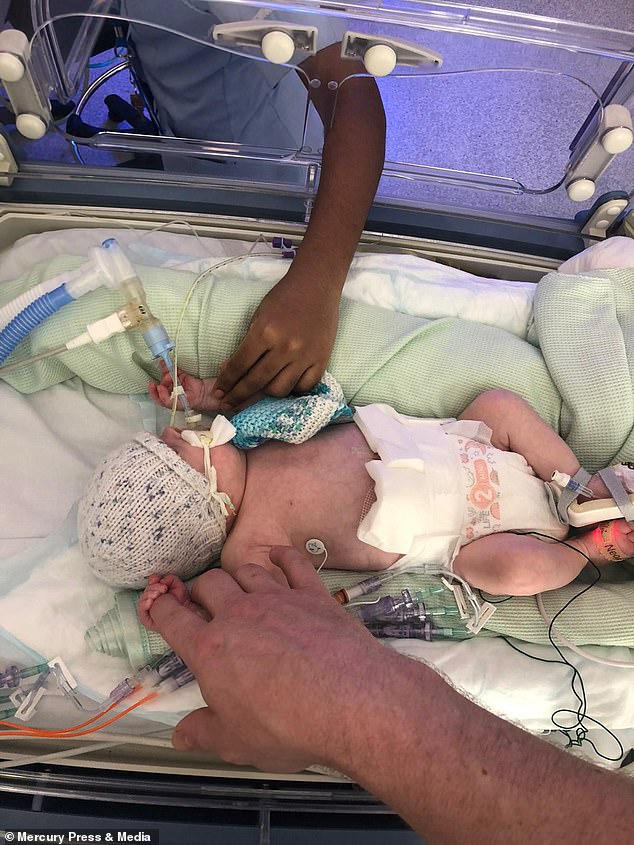 Current social distancing guidelines for neonatal intensive care units (NICUs) are set out by the government and not specific hospitals.

The current guidance is that only one parent is allowed to visit their baby at a time, as long as they don’t have Covid-19 symptoms.

Sophie and Luke are now raising money via GoFundMe to help fund Arlo’s funeral and have already raised more than £3,000 with any leftover donations will be donated to the NICU at St Mary’s.

Luke said: ‘It’s going to take our son away from us. You can’t imagine losing a child just from bacteria in his gut.

‘People take their gut for granted. You think you eat food and it comes out and that’s that, but that’s not the case at all. Without it, you can’t process food or drink and can’t survive.’

To donate to the family’s Go Fund Me page, click here.

Related posts:
May 12, 2020 World News Comments Off on Agony for parents of baby given weeks to live due to rare condition
Celebrity News:
Thandie Newton Opens Up About Surviving Sexual Assault as a Teenager
Paris Jackson Confesses That She Did Try To Kill Herself In New ‘Unfiltered’ Episode
Kylie Jenner Claps Back After Fans Accuse Her of Snubbing Black Designer
Lucy Mecklenburgh stuns in summer dress as she goes shopping ahead of first date night since welcoming son Roman
Mary Trump's Tell-All Book: President Cheated on SATs, Commented on Niece's Breasts, Abandoned Brother on Deathbed
Recent Posts
This website uses cookies to improve your user experience and to provide you with advertisements that are relevant to your interests. By continuing to browse the site you are agreeing to our use of cookies.Ok