Australian Federal Police have arrested an employee of an Emirates-owned air services company and charged him with drug trafficking and money laundering offences as a result of the Operation Ironside investigation.

The man, Frank Meredith, is a Sydney airport-based employee of air services company Dubai National Air Travel Agency (DNATA), which is owned by Emirates and his arrest came after a two-year AFP operation. 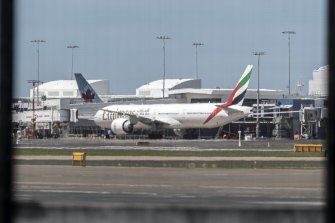 The man worked for an Emirates offshoot at Sydney airport.Credit:Brook Mitchell

In a statement, the AFP said one of the crime syndicates identified by Ironside “consisted of people with trusted insider access at the airport, who utilised encrypted devices to communicate”.

The arrests come just days after The Age and The Sydney Morning Herald revealed that law enforcement agencies believe Qantas has been infiltrated by organised crime groups, including at Sydney airport.

Qantas responded to the revelations by backing the Coalition’s proposed changes to the vetting of airport workers, which would allow the federal agencies to use criminal intelligence to deny suspected crime figures access to sensitive border and port posts.

Multiple classified reports completed over the past decade have highlighted vulnerabilities in aviation security across Australia.