The Andrews government will keep secret a deal it signed with Beijing aimed at fostering China’s government involvement in Victorian infrastructure projects.

The 2017 agreement was signed separately to the recently cancelled Belt and Road framework and is being looked at by the Commonwealth to determine whether it contradicts Australia’s foreign policy interests. The agreement’s aim is to facilitate public-private partnerships between the Victorian government and Chinese firms, which tend to be state-owned. 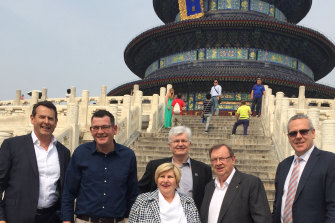 The state opposition and foreign policy specialists are calling on the government to disclose the memorandum of understanding and explain its implications for Chinese firms’ involvement in the state’s vast infrastructure pipeline, including the Suburban Rail Loop estimated to cost up to $50 billion.

Using freedom of information legislation, The Age asked the government for the memorandum of understanding but the request was denied on the basis that the agreement included information disclosed by the Chinese government to Victoria “with an expectation of confidentiality, and disclosure is likely to inhibit the ability of the state to receive similar information in the future”. It took five months for the government to respond to the application, which was supposed to take 30-45 days.

The Department of Premier and Cabinet – under former secretary Chris Eccles, who had a close working relationship with Premier Daniel Andrews – signed the deal along with the Premier’s office in 2017, and bypassed Victoria’s economic development department that would ordinarily negotiate economic pacts with foreign governments.

Paul Monk, former head of China analysis in Australia’s Defence Department, said it was possible the agreement had provided a leg-up to Chinese firms bidding for Victorian government work. 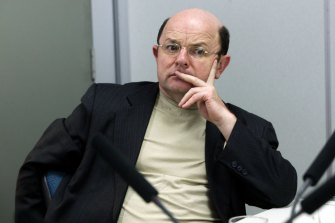 “Private firms can keep commercial deals secret but governments, which act on behalf of people, should not keep things like this secret,” Dr Monk said.

“The BRI has been scuppered. If this other deal was entered into innocently and in good faith, then the Victorian government should release it.”

The agreement is one of two yet to be investigated by the Morrison government, which last week cancelled Victoria’s Belt and Road agreement with China on national security grounds. The other is a 2015 pact with the province of Jiangsu facilitating intellectual property sharing between Australian and Chinese universities and companies to create new products.

Last week, Andrews government members in Victoria’s upper house did not oppose a Liberal Party motion congratulating the Commonwealth for tearing up the Belt and Road agreement. The move was surprising because it is rare the government allows anti-government motions to pass without a fight. No government ministers have defended the Belt and Road deal since its cancellation.

The wording of the public-private partnership agreement is unknown but the government’s intention to lure Chinese investment was made clear by the Premier courting Chinese companies during a 2019 trip to Beijing when he promised to “facilitate” access to Victoria and “collaborate” on the state’s biggest projects.

A state government spokeswoman said of the deal: “Victoria’s MoU [memorandum of understanding] with China on public-private partnerships in infrastructure fields aims to strengthen dialogue on relevant policies to promote sustainable social and economic development and is not legally binding.” 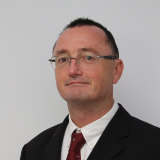 Foreign policy expert Michael Shoebridge, the director of defence, strategy and national security at the Australian Strategic Policy Institute, said the Commonwealth’s decision to tear up the Belt and Road Initiative should have sent a clear message to the Andrews government that it must be more transparent about its controversial deals with China.

“Transparency is one of the principle ways our government operates, and opacity and secrecy are one of the primary ways the Chinese state operates,” Mr Shoebridge said. The institute is partly funded by the US government.

He said all companies in China, whether private or public, were, in principle, directed by the government.

Leader of the opposition in the upper house David Davis said the Labor government’s refusal to release the content of the agreement was “the sign of a secret state”. “Victorians are entitled to conclude there is something to hide,” he said.

“Given the large number of Chinese firms that are directly controlled by Chinese Communist Party involved in our major projects, Victorians are entitled to ask what deal or deals have been struck by Daniel Andrews.”

An executive from China Communication Construction International Company and the chairman of John Holland (a fully-owned subsidiary of CCCC that was blacklisted by former US secretary of state Mike Pompeo) attended a dinner with Mr Andrews, who invited partners for the Suburban Rail Loop project which has not yet been funded.

John Holland is building the West Gate Tunnel, the Melbourne Metro, level crossing removal projects, hospitals, prisons and is a bidder for the North East Link.

It has also been shortlisted for the development of Treasury Square, Footscray Hospital, Sunbury rail corridor, Victorian Heart Hospital, and the Frankston station precinct redevelopment.

“You will find the Victorian market accessible, and my government will welcome your participation and do what it can to facilitate success,” Mr Andrews’ speech notes at the dinner state.

At the end of each day, we’ll send you the most important breaking news headlines, evening entertainment ideas and a long read to enjoy.  Sign up here.