When explaining how he was able to capture the spirit of Anthony Bourdain in his haunting new documentary, filmmaker Morgan Neville said he felt it was vital to have the whole film in the voice of the acclaimed chef, who died by suicide in 2018.

To do so, the director and the crew for Roadrunner: A Film About Anthony Bourdain used artificial intelligence to create three sound bites with Bourdain’s voice – a process, Neville said, that was approved by the late celebrity chef’s widow and literary executor “just to make sure people were cool with that”. 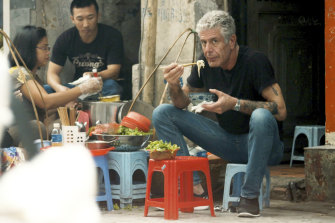 But the editorial decision to deepfake Bourdain’s voice has come under fire from critics who have questioned the ethics behind using AI for the film, which opened on Friday. Among those critics is Ottavia Bourdain, his widow, who disputed that Neville approached her about recreating her husband’s voice through AI in the documentary.

“I certainly was NOT the one who said Tony would have been cool with that,” she tweeted early Friday.

Neither Neville nor Focus Features, the documentary’s distributor, immediately responded to requests for comment. Neville emphasised to Variety that the decision to use AI technology was made “with the blessing of his estate and literary agent”.

“It was a modern storytelling technique that I used in a few places where I thought it was important to make Tony’s words come alive,” Neville said. 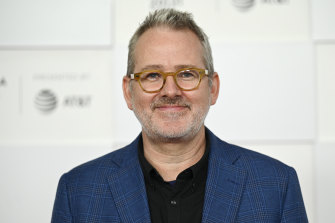 Director Morgan Neville at the premiere of “Roadrunner: A Film About Anthony Bourdain” in New York.

Anthony and Ottavia Bourdain married in 2007 after his first marriage, to Nancy Putkoski, ended in divorce. They had a daughter, Ariane, and the couple later separated in 2016, but they never finalised their divorce before his death. Ottavia Bourdain did not immediately return a request for comment.

The film, which comes three years after Anthony Bourdain’s death, has been met with mostly positive reviews since it premiered at the Tribeca Film Festival last month. In his review for The Washington Post, Tim Carman noted that Neville’s raw, very public take on Bourdain’s life produced a “nervy, impressionistic film, which over the course of two hours quietly peels back the layers of an onion that sweetened almost everything it touched and left many of us with tears in our eyes.”

Neville is regarded as one of Hollywood’s most decorated documentary filmmakers, with 20 Feet from Stardom winning the Academy Award for best documentary feature in 2014.

As Neville combed through every book, podcast and voice-over session Bourdain had participated in, he noticed a few lines that the globe-trotting chef had written but was never recorded saying. Since the filmmaker wanted Bourdain’s voice to be the dominant one in the film, Neville told GQ that he “had this idea to create an AI model of his voice.”

After he reached out to a software company, Neville and the film’s editors, Eileen Meyer and Aaron Wickenden, fed more than 10 hours of recordings featuring Bourdain into an AI model that would deepfake his voice, the filmmaker said. Otherwise known as “synthetic media,” the deepfake clips created by the support of AI are so effective that it’s often impossible to tell whether the content is altered or fabricated. The much-debated technology has caused tech giants such as Facebook and Twitter to put out policies addressing video and audio that regularly trick people.

The filmmaker claimed that he got approval from Bourdain’s estate and that he “wasn’t putting words into his mouth”.

“If you watch the film … you probably don’t know what the other lines are that were spoken by the AI, and you’re not going to know,” he told the New Yorker. “We can have a documentary-ethics panel about it later.”

Critics did not want to wait until later, taking to social media to lambaste Neville’s decision as “manipulative” and “extremely weird.”

Film writer Sean Burns, who reviewed the film for WBUR, said he was unaware the film used an AI model for several of Bourdain’s lines by the time his review published early Thursday.

“I feel like this tells you all you need to know about the ethics of the people behind this project,” he tweeted.

David Friend, an entertainment reporter at the Canadian Press, wondered why the film did not disclose that some of the words said by Bourdain were actually from an AI model.

“We need a serious check on ethics in documentary filmmaking,” he said.

While technology has regularly been used in films to bring back actors such as Carrie Fisher and Paul Walker, who appeared posthumously, critics have noted that those instances did not involve someone who was the subject of a documentary. Part of the backlash to the deepfake technique in this case was because of how devastated fans were over Bourdain’s death, Hollywood Reporter tech editor Carolyn Giardina told ABC News.

“This and similar uses, I think are going to continue to be a gray area for quite some time,” she said.

Helen Rosner, the New Yorker staff writer who interviewed Neville, said that while she was against the deepfake voice, it did not take away from a documentary she enjoyed.

“If it had been a human voice double I think the reaction would be ‘huh, ok,’ but there’s something truly unsettling about the idea of it coming from a computer – which is both a logical and illogical response!” she tweeted. “I think the nature of the film – structurally, topically, and tonally – tempers my knee-jerk recoil to the idea of AI line readings. I don’t like it! But I don’t think my dislike makes it grotesque, opportunistic, or morally wrong.”