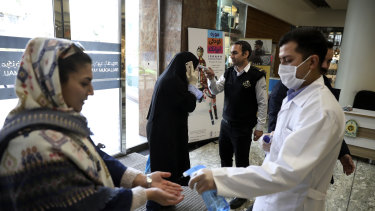 People have their temperature checked and their hands disinfected as they enter the Palladium Shopping Center, in northern Tehran, Iran.Credit:AP

From religion to sports, countries were taking drastic and increasingly visible measures to curb the new coronavirus that first emerged in China and was spreading quickly through Europe, the Mideast and the Americas.

In the United States, frustration mounted over US officials' delays and missteps in testing people for the virus.

Deaths spiked in Iran and Italy, which along with South Korea account for 80 per cent of the new virus cases outside China, according to the World Health Organisation. In all, more than 94,000 people have contracted the virus worldwide, with more than 3200 deaths.

"People are afraid and uncertain. Fear is a natural human response to any threat," said WHO's leader, Tedros Adhanom Ghebreyesus. "But as we get more data, we are understanding this virus and the disease it causes more and more." 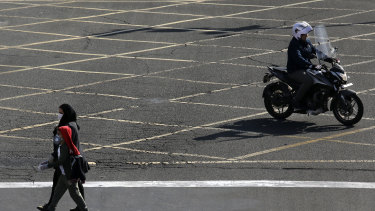 WHO said about 3.4 per cent of people infected with the COVID-19 virus globally have died, making it more fatal than the common flu. The figure was a bit of a surprise, since a study last week in the New England Journal of Medicine assessing data from more than 30 Chinese provinces estimated the death rate was 1.4 per cent.

Death rates in outbreaks are likely to skew higher early on as health officials focus on finding severe and fatal cases, missing most milder cases. WHO says the majority of people with the new coronavirus experience only mild symptoms, but the risks rise with the age of the patient and for those with any underlying health conditions.

In Daegu, the South Korean city at the centre of that country's outbreak, a shortage of hospital space meant about 2300 patients were being cared for in other facilities while they awaited a hospital bed.

Attending a meeting on quarantine strategies in Daegu, Prime Minister Chung Se-Kyun sought to assure his country, saying "We can absolutely overcome this situation. … We will win the war against COVID-19."

South Korea reported 435 new infections on Wednesday, far smaller than its high of 851 a day earlier. A total of 5621 people in South Korea have contracted the virus and 32 have died.

Italy's virus deaths rose to 107, the most of any country outside of China. Its outbreak has been concentrated in the northern region of Lombardy, but fears over how the virus is spreading inside and outside the country prompted the government to order all schools to close nationwide through March 15.

Iran reported 92 deaths among its 2922 confirmed cases, although many fear the outbreak is far broader. Among the ill are members of the government, and the country cancelled Friday prayers for the second week in a row.

"The virus has no wings to fly," noted Health Ministry spokesman Kianoush Jahanpour. "We are the ones who transfer it to each other."

Israeli Prime Minister Benjamin Netanyahu also urged people to adopt the Indian greeting of "namaste," with hands together, rather than a handshake.

The virus has spread beyond clusters throughout Germany and France, prompting officials to tell soccer players to simply disperse – without shaking hands – after lining up. Referees and coaches will no longer shake hands either.

The UN health chief has warned sharply against hoarding medical supplies, saying they are needed to protect health care workers on the front line. Accordingly, the Czech Republic, Russia and Germany announced bans on exporting protective gear like masks.

That followed a similar move by France, where major hospitals have seen their masks stolen by the boxful.

In the US, more than 120 cases have been reported. Nine people have died, all in and around Seattle, Washington. On Capitol Hill, lawmakers were expected to finalise an agreement Wednesday on a $US7.5 billion emergency bill to fund work on a virus vaccine and other measures.

India, meantime, tightened the export of 26 key drug ingredients used in pharmaceutical manufacturing, a potentially disruptive move taken as its caseload rose to 28 on Wednesday.

China reported 119 new cases Wednesday, all but five in the outbreak's epicentre of Wuhan. In a sign of the shifting threat, Beijing's health commissioner said two new cases in the Chinese capital were apparently infected abroad, in Iran and Italy.

The state-run Xinhua News Agency said Hubei province, where Wuhan is located, was expected to gradually shut down its hastily built temporary hospitals.

"We believe this decline is real," WHO outbreak expert Maria Van Kerkhove said of China. The country has reported 80,270 infections and 2981 deaths from the COVID-19 illness.

Doctors working in Wuhan told reporters by video conference Wednesday that hospitals there have an increasing number of empty beds but cautioned there is always the possibility of a new spike of infections.

"The war is not over," said Dr. Cao Bin, who specialises in respiratory research. "The disease is not only a Wuhan disease, and not only a China disease, but also a global disease."

The outbreak was blamed for market instability around the globe. Businesses of all types were experiencing economic woes as travel and tourism plummeted and worried consumers changed their habits.

"People are afraid to touch anything or take anything from us," said Maedeh Jahangiri, a perfume seller at a mall in the Iranian capital of Tehran.

Japan's prime minister, who ordered schools closed nationwide last week, was pressing for legal backing to declare a state of emergency if needed.

In France, the Louvre finally opened Wednesday after days of meetings to reassure workers worried about catching the virus from the museum's thousands of daily visitors.

In the UK, the number of virus cases jumped to 85 but Prime Minister Boris Johnson's government has warned that is expected to rise dramatically. It unveiled a detailed, worst-case plan to fight the virus, but was at a loss for words on Wednesday when asked about measures to protect lawmakers and staff in London's crowded Parliament. Lawmakers in Britain skew older.

The government will "say a little bit more in the next couple of days about what we're going to do to delay the advance of coronavirus in Parliament and at other large gatherings," Johnson said.

The Associated Press receives support for health and science coverage from the Howard Hughes Medical Institute's Department of Science Education. The AP is solely responsible for all content.