Archie Roach’s appearance on stage for his final Melbourne show as part of his last national tour, Tell me Why, was a confronting and heartbreaking sight for his adoring fans at the Sidney Myer Music Bowl.

Uncle Archie was wheeled onto stage holding an oxygen bottle, the tubes from which were feeding much-needed oxygen into his lungs.

He was at pains to put his fans at ease; that he was doing this not because he had to, but because he wanted too. “Being up here, doing this, is my healing,” said Roach said, who has had chronic obstructive pulmonary disease for years. His condition has worsened in recent months. 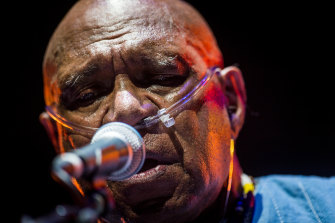 Roach is one of this country’s most important and treasured singer-songwriters. Through his songs he has educated this country on the history of Aboriginal experience and the injustice and desecration of his people and land. His profoundly spiritual presence would capivate for the next hour and a half in imparting a deeply personal and moving on-stage memoir of his life.

The songs, his experiences, the heartbreak and joy of his people on their land and country. His concert on Friday night was a final call for justice, for understanding, for empathy, for healing and for a better future for our children and our country.

Roach introduced each song with the storytelling that has defined his people through thousands of generations. His first song A Child was Born Here was prefaced with the fight the Djab Wurrung people have faced to save sacred birthing trees. “Be careful when you walk through this land, because a child was born here,” he cries out in a voice that has lost some of its depth, but none of its resonance and power. 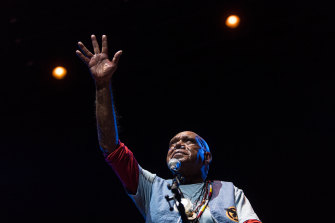 Roach’s performance had many in the crowd in tears.Credit:Justin McManus

Took the Children Away followed, Roach’s seminal song that gave voice, and a face, to the stolen generations of Aboriginal children in Australia. There is something enigmatic about watching Roach perform this song, especially when you know it’s his last performance in Melbourne on a grand stage.

The inflection of the performance is powerful and disquieting, you are at once in awe of the strength needed to perform such a harrowing experience, but also overwhelmed by the sadness that consumes him, you watch, and listen, anticipating tears. They don’t come from Archie, but looking around in the crowd they are plentiful.

This same feeling is present in many of his songs this night; especially in the songs about, or written by, his late wife Ruby Hunter.

In Down City Streets, the song penned by Hunter, Roach takes on her vibrato voice in a haunting tribute and in the song about the wife’s removal from her home country on the Coorong, he reaches to a place within where Ruby resides. He takes on her form, her feelings and her totem in the form of Nori (Ngarindjerri word for Pelican) his arms out-stretched like wings as he glides, eyes closed across the lagoons of the Coorong. 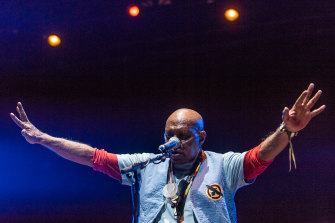 Roach was accompanied onstage by his five-piece band, including Paul Grabowsky on piano whose gentle improvisations provide poignancy and lightness, while special guest vocalist Sally Dasty gives power and depth to these fabled songs. Paul Kelly makes a guest appearance much to the delight of the crowd on the carousing Rally Round the Drum, an ode to his father and his brief stint as a travelling tent boxer.

Despite the heartbreak of Archie’s story and songs, and his visible declining health, this was a performance of joy, humour and family.

His final performance embodied his generosity of spirit to this country, his desire to heal his people and connect us all to this land.

Our Morning Edition newsletter is a curated guide to the most important and interesting stories, analysis and insights. Sign up here.