Defiant Bernie Sanders tells 10,000 fans at huge Chicago rally he is going to WIN the nomination for the ‘long-neglected working class’ and bashes frontrunner Biden on abortion, the Iraq War and social security

‘Today we make it clear that the only way we beat Trump is with a campaign of energy, excitement and grassroots activism,’ the Democratic socialist told cheering Chicagoans on Saturday.

‘That is our campaign.’

Sanders’ speech was frequently interrupted by loud applause and chants of ‘Bernie, Bernie,’ according to the Chicago Tribune.

Supporters of the senator brought placards and light-blue signs that read ‘Bernie’ as the candidate spoke for about an hour. 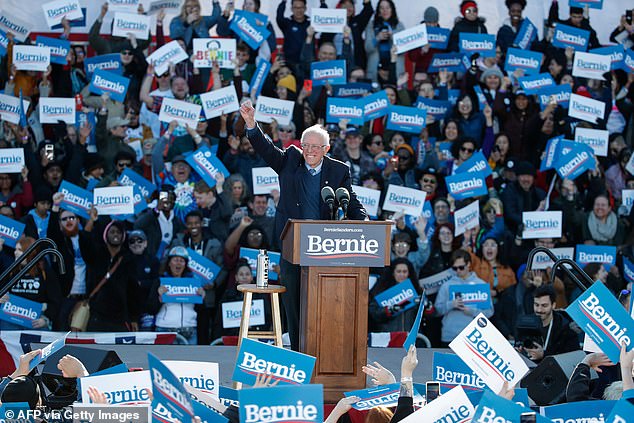 Senator Bernie Sanders waves to an estimated 10,000 supporters who gathered in Chicago’s Grant Park on Saturday to hear him speak 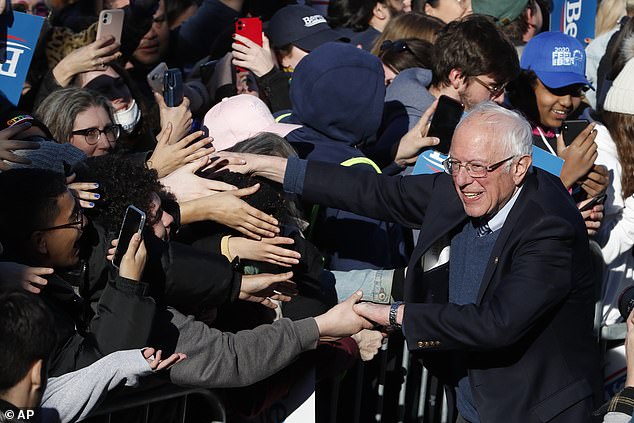 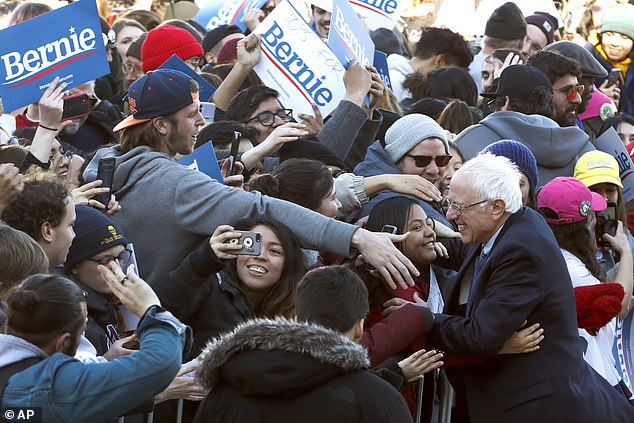 Sanders greets his supporters at Grant Park in Chicago on Saturday 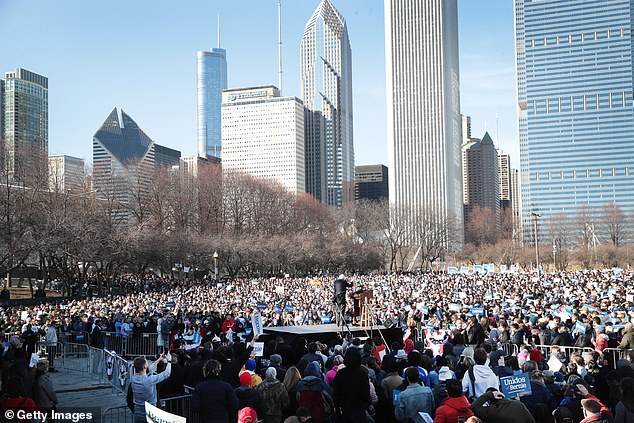 During his speech, Sanders criticized his main rival, Joe Biden, who has taken the lead in pledged delegates after his string of victories on Super Tuesday

Sanders, who has been criticized for being polarizing while failing to crack down on his more vocal supporters online, sought to differentiate himself from Biden while also noting that the two men were on friendly terms.

‘Joe Biden and I are friends,’ he said.

‘Now that the primary nomination process is coming down to two people, it is important for the American people, the people of Illinois, to understand the differences between us in terms of our record, in terms of our vision for the future.’ 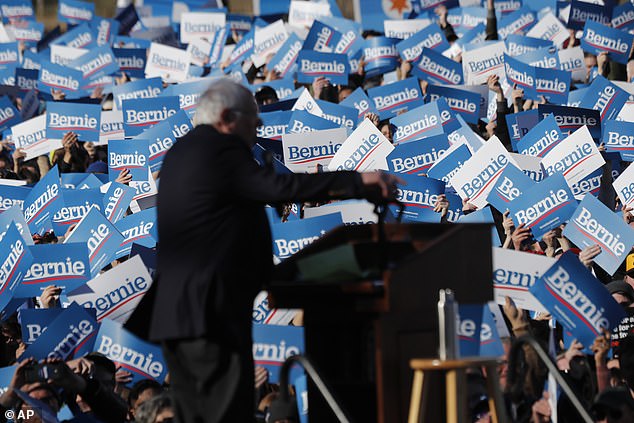 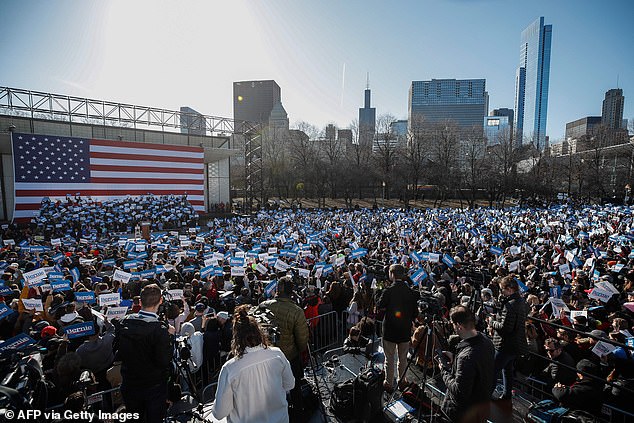 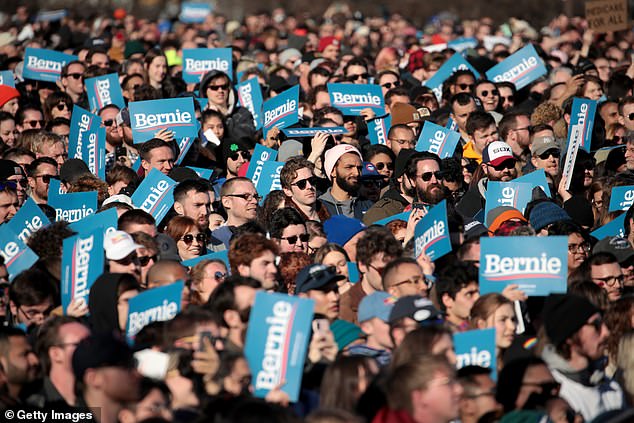 In 2016, Sanders lost the Illinois primary by less than 40,000 votes. The eventual nominee, Hillary Clinton, was the winner 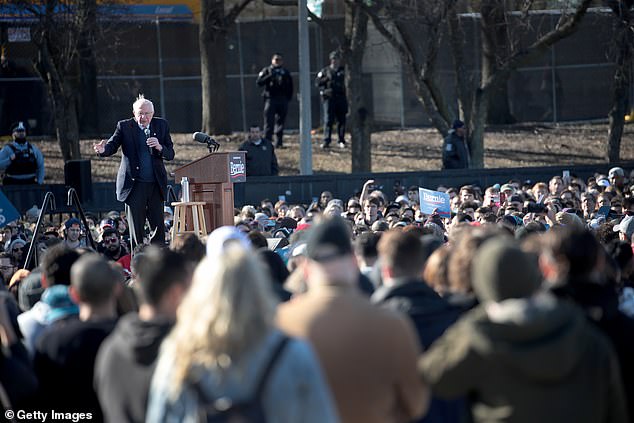 Sanders hit out at Biden for his past statements on abortion, cutting Social Security, and his support for the Iraq War 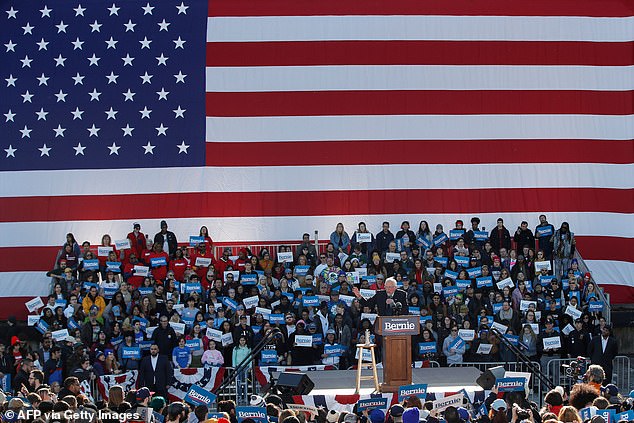 He reminded the audience in Chicago that Sanders was opposed to the 2003 invasion of Iraq while Biden supported it.

Sanders also noted that Biden backed the North American Free Trade Agreement as well as other economic measures that are being blamed for gutting manufacturing jobs in the industrial Midwest.

Biden was also criticized by Sanders for past statements he made in support of making cuts to Social Security and Medicare.

On abortion, Sanders reminded the crowd that Biden only recently renounced his support for the Hyde Amendment, which banned taxpayer-funded abortions.

Sanders also returned to the theme of campaign finance, criticizing candidates like Biden for accepting contributions from wealthy donors.

The senator reminded the audience that his campaign is entirely funded by individual donors.

‘We’re going to win this election because we have the agenda that speaks to the needs of a long-neglected working class,’ he said.

Sanders continued: ‘We’re going to raise that minimum wage to 15 bucks an hour.

‘Women should not make 80 cents on the dollar compared to men. Equal pay for equal work.

‘And when millions of workers want to join unions, want to get decent wages and decent benefits through a union, we are going to make it easier for workers to join unions, not harder.’

Sanders rallied in Chicago 10 days before Democratic voters in Illinois go to the polling stations to cast ballots in the party primary on March 17.

The state’s 155 pledged delegates are up for grabs.

Clinton, who was born in Chicago, captured the state by less than 40,000 votes. 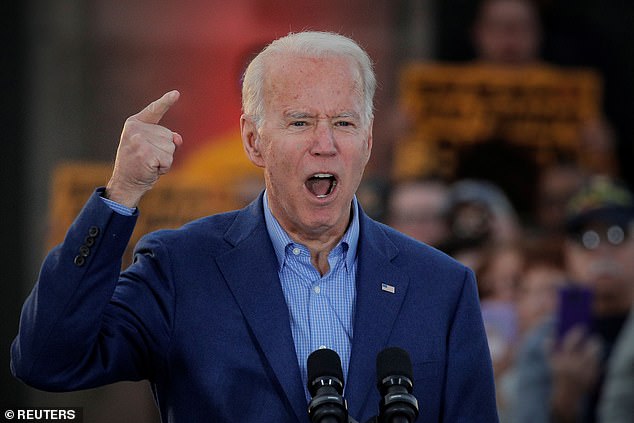 Joe Biden, the former vice president and current front runner, speaks at a rally in Kansas City, Missouri, on Saturday 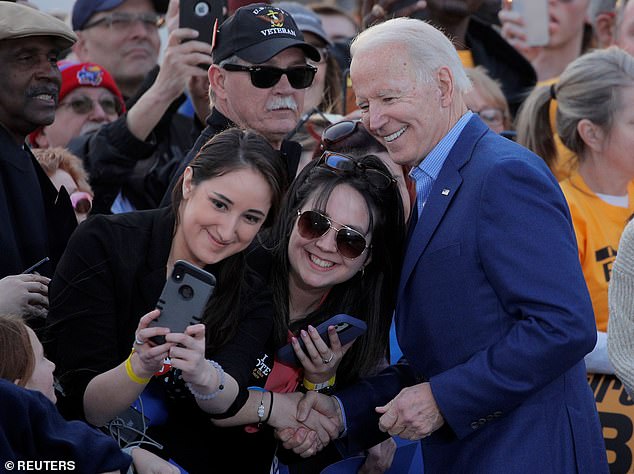 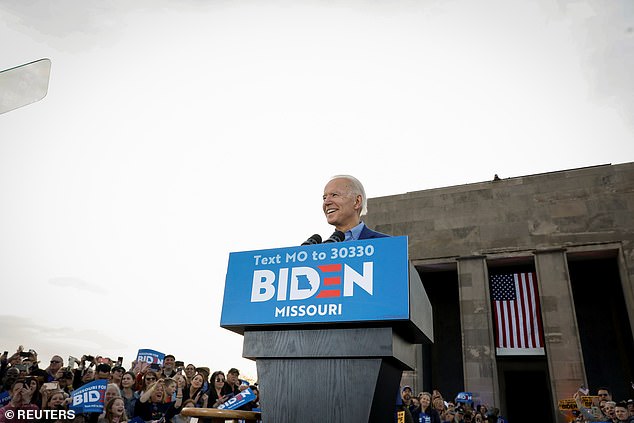 Polls taken before last week’s Super Tuesday primaries showed Sanders with a lead, but momentum appears to be with Biden, who won endorsements from the centrist Democrats who dropped out of the presidential race.

Other high-profile endorsements for Biden, including that of former House Rep. Beto O’Rourke, indicate that establishment Democrats are coalescing around the man they believe has the best chance to defeat Trump.

Sanders was a busy man on Saturday. After his Chicago rally, he spoke at events in Michigan – another critical state that is holding a primary on Tuesday.

Campaigning in St. Louis, Biden took a number of veiled swipes at Sanders, even as he called on Democrats to rise above Trump’s division.

He told the crowd that if they wanted to nominate a ‘lifelong’ and ‘proud’ Democrat, they should pick him.

Sanders has served in Congress as an Independent and caucused with Democrats.

‘If you want a nominee who’ll bring the party together, who will run on a positive progressive vision for the future, not turn this primary into a campaign of negative attacks – because that will only reelect Donald Trump if we go that route – if you want that, join us,’ Biden said. 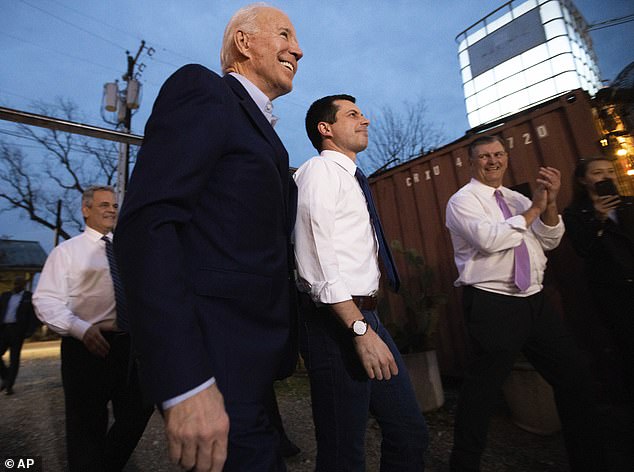 Biden has taken the lead in the race after winning endorsements from candidates who dropped out, including Pete Buttigieg, the former mayor of South Bend, Indiana. Buttigieg is seen right with Biden in Dallas on Monday 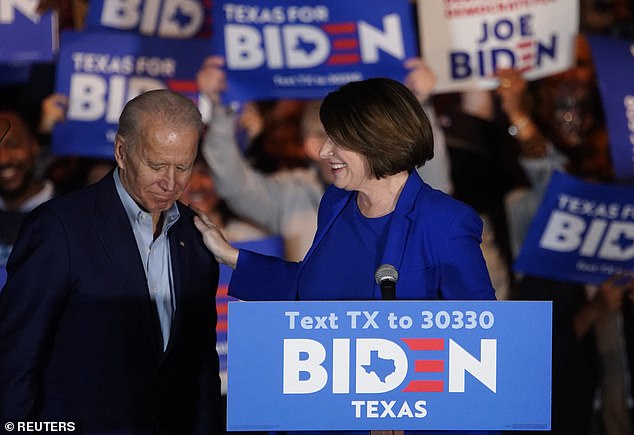 The former vice president also knocked Sanders’ weeks of suggestions that he is the candidate who can prompt record voter turnout in November and defeat Trump, saying that actually ‘we´re the campaign that’s going to do that.’

In a sign of how biting the contest may become, Sanders supporters – including his campaign manager – raised questions about Biden’s stamina after he gave a seven minute speech in St. Louis.

At his second stop, in Kansas City, he again gave a truncated version of his stump speech, speaking for a little over 15 minutes.

Sanders campaign manager Faiz Shakir issued a tweet noting Biden’s short speaking time and highlighting the fact that Sanders had three campaign events on his schedule, ‘each speaking engagement extending for close to an hour.’

That prompted swift online push back from Biden allies.

But the focus on Biden´s age is somewhat ironic given that the 78-year-old Sanders is actually a year older than Biden.

Sanders, who has served in Congress since 1991, says he’s bucked the establishment of both parties with decades with unpopular stands that now give him the credibility to lead a political revolution ‘from the bottom up.’