A BBC drama series will depict a ‘reverse apartheid’ society where dark-skinned people run a culture that oppresses light-skinned people.

The series is an adaptation of Malorie Blackman’s 2001 book Noughts + Crosses – a drama set in an alternate world where Britain, known as Albion, which has been ruled by the ‘Aprican Empire’ for 700 years.

It focuses on the forbidden romance between star-crossed lovers Sephy – the daughter of Albion’s racist home secretary – and Callum McGregorm, a white teenager who is the son of their family maid.

There are two races in Albion: the crosses, darker-skinned with money, power, jobs and education – and the noughts, lighter-skinned, poorer and usually working as labourers and servants.

Rapper Stormzy appears in a later episode as the editor of a right-wing newspaper.

Paterson Joseph, the 55-year-old actor who played Johnson in Channel 4’s Peep Show, plays the complicated character of the country’s home secretary – who is depicted as racist but also a loyal and affectionate family man. 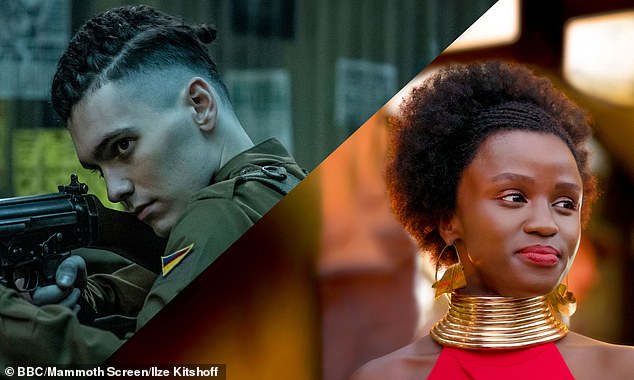 The book Noughts + Crosses was set largely in school, but the series has aged up the characters to their late teens. Pictured, Callum, left, with a gun and Sephy, right 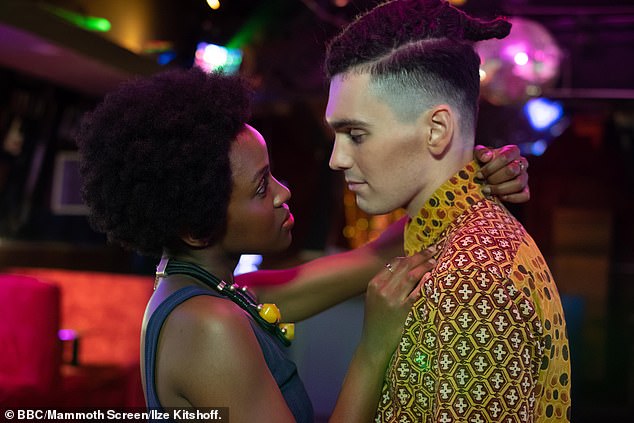 ‘It was important to me to make him as rounded as possible,’ the actor said at the series’ premiere, according to the Times.

‘Just because somebody is a racist, it doesn’t mean they are not human. It just means that they perhaps have had a certain upbringing, or have had things reinforced that have made them ignorant of the other.’

The television adaptation, which was filmed on location in South Africa, begins on BBC One on Thursday night at 9pm.

All six episodes will be made available immediately on BBC iPlayer to encourage marathon viewing of the series.

In the drama, the London skyline features a Statue of Liberty-sized depiction of an African woman. 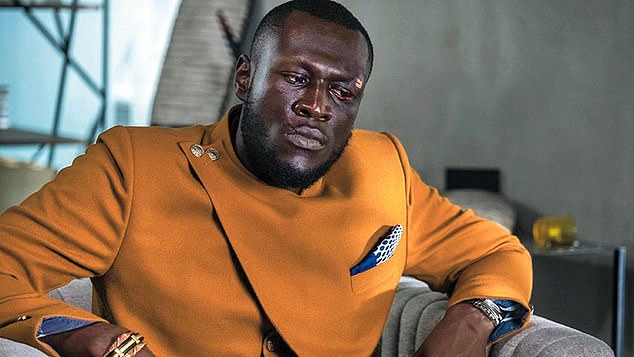 Stormzy (a huge Noughts + Crosses fans) plays Kolawale, the editor of a right-wing newspaper. The character does not appear in the books and the team hope diehard fans will accept him 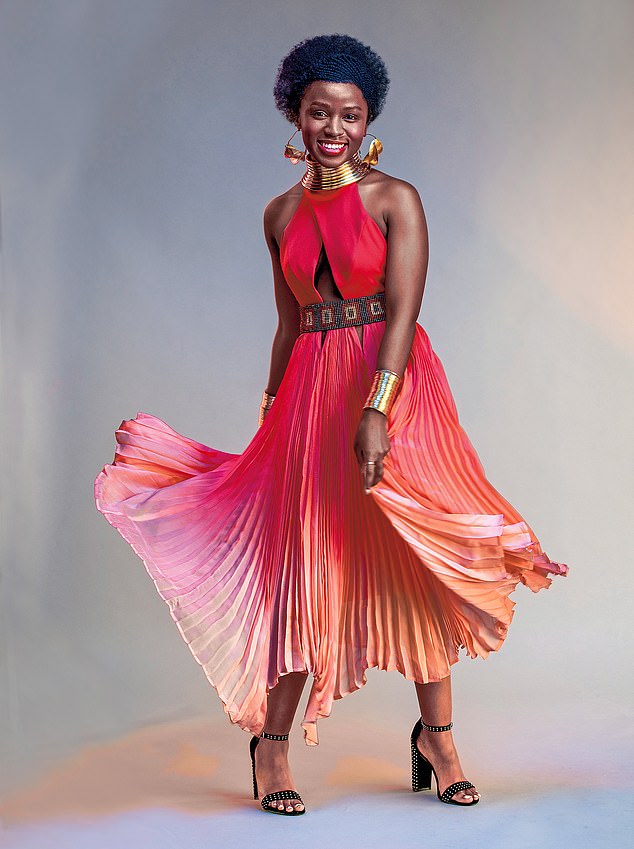 The actor said it was ‘unpleasant’ to depict the character’s views, and he hopes viewers see he is just a ‘lost young man’.

When Callum, a Nought, falls in love with Sephy, a high-status Cross, the ramifications include terror attacks and kidnapping.

Jack Rowan, who plays Callum, grew up in a multicultural part of London, boxing with kids of all backgrounds, and for him the premise of the six-part series was uncomfortable.

‘When we started, it was a shock,’ says Jack, who played Bonnie Gold in Peaky Blinders. ‘We did a week-long military training boot camp and I felt isolated when the instructor segregated the cast.

‘When we’re on set the supporting artists are told, “Callum is a Nought, give him dirty looks.” It’s the closest I’ve come to understanding how that feels.’ 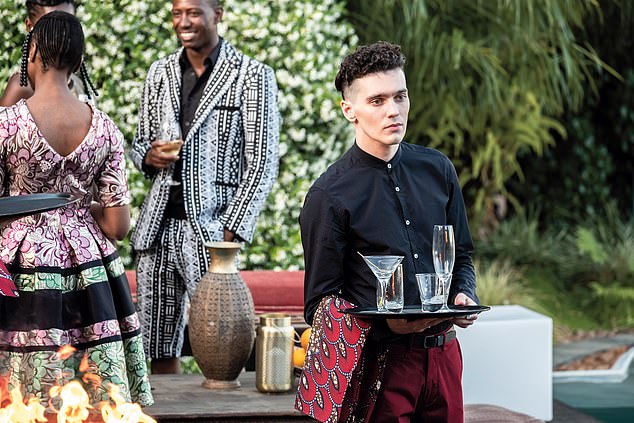 Jack Rowan, who plays Callum (pictured), grew up in a multicultural part of London, boxing with kids of all backgrounds, and for him the premise of the six-part series was uncomfortable

Callum follows the rules, works hard and seems to be forging a path in life for himself. 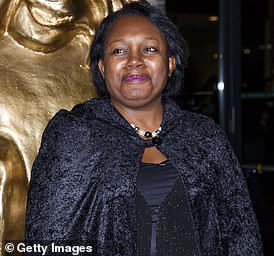 The Noughts & Crosses series includes three novellas set in an alternative history where African nations gained a technological and structural advantage over Europeans.

The series is set in ‘Albion’, an alternative 21st-century Britain.

A culture of segregation keeps the dark-skinned crosses in a position of authority over the light-skinned noughts.

The book is written from the perspectives of Callum, a ‘colourless’ nought, and Sephy, a cross.

The two have been friends since their early childhood, but that is as far as it could ever go.

A limited number of noughts are allowed into cross schools as steps towards social equality are made against a background of prejudice and distrust.

Amid the background of a hostile societal atmosphere, sharply highlighted through violent terrorist activity by the noughts, a romance builds between Sephy and Callum which stands to lead them both into danger.

In the next book, Crossfire, Blackman returns to that world to tackle contemporary politics as the next generation battles not just racism, but the power of politicians and social media to whip up prejudice and fake news to manipulate and corrupt individuals and society.

Childhood friends Troy and Libby were driven apart by their parents’ bigotry, but they then find themselves thrown together in a dangerous situation as a result of old lies, betrayals and enmities.

He used to play with Sephy as a child when his mother cleaned her family’s house, but when he got older he wasn’t allowed to any more.

‘Then he sees her at a party when he’s working as a waiter. Not only is she beautiful, but she also used to be his best friend,’ says Jack. ‘That’s when the tragedy begins.’

Masali Baduza is the young South African newcomer playing Sephy. ‘She’s from the so-called perfect family but has no idea what’s under the surface,’ Masali says.

The book, which last year was included in the BBC’s list of 100 Novels That Shaped Our World – along with Frankenstein and Pride And Prejudice – has always been filmable.

Having Malorie’s approval was crucial in many ways – from critical plot changes to surprising bonuses such as casting Stormzy.

The books are the London rapper’s favourite novels and when he met Malorie at an awards show and she told him about the series, he wanted to be involved.

‘We thought he’d write some music,’ Preethi says. ‘But it escalated and he’s now playing a character who’s not in the books – Kolawale, the editor of a right-wing newspaper, which is a fun switch for him.’

Stormzy’s character is just one change the team hope diehard fans will accept. The book Noughts + Crosses was set largely in school, but the series has aged up the characters to their late teens and taken them out of education.

The story now encompasses national politics and hugely ambitious themes. Cape Town was chosen for the location because it has hints of Europe with an African feel.

But the basic premise remains the same and rests on the hotly debated theory that Africans did indeed reach Europe then, and even got as far as America.

‘We had to decide when and how the world changed, and what it may have looked like,’ explains Toby Whithouse, who has adapted the series from the book.

‘We found that big fleets were sent out from West Africa around 1200AD – some of them reached the US but most of the ships were lost.

‘We say they landed in southern Europe and colonised the continent. It’s provocative and I can’t predict people’s reaction to it.’ 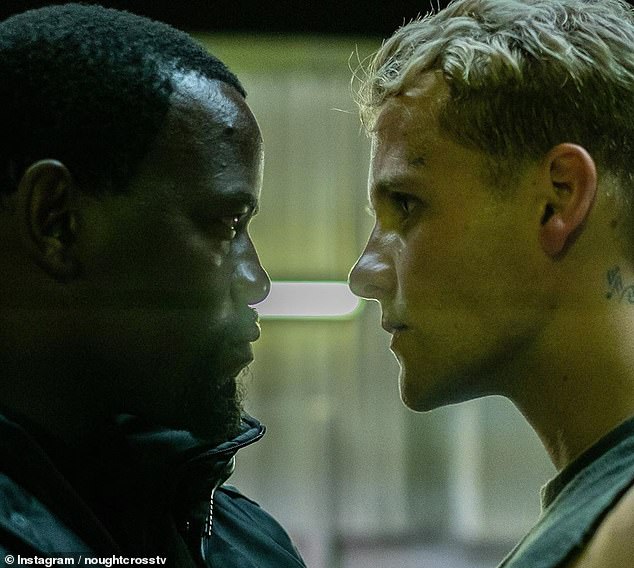 The television adaptation, which was filmed on location in South Africa, begins on BBC One tomorrow night at 9pm 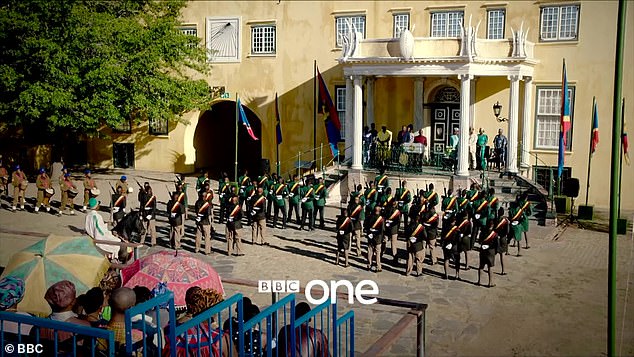 The television adaptation, which was filmed on location in South Africa, begins on BBC One on Thursday night at 9pm

‘The main reason I took this role was my kids’ reaction,’ says Helen. ‘They loved the books and said I had to do it. My kids are 13, 18 and 21 but they’ve all read them. I was worried they’d hate any changes, but they’ll be fine.’

She does worry, though, that the show will cause a furore. ‘With social media there seems to be controversy at everything,’ she says.

‘There’ll probably be people from left and right who’ll fume about this. I hope it makes people think; that’s all you can hope. It’s only a TV show after all.’