Beirut: Benjamin Netanyahu, the Israeli prime minister seeking re-election for the third time in under a year, has again promised that the annexation of swathes of the occupied West Bank would happen within weeks if he wins Monday's election. 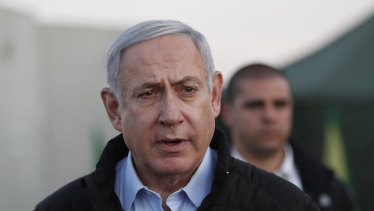 Israeli Prime Minister Benjamin Netanyahu visits an Israeli army base in the Golan Heights on Sunday.Credit:AP

The appropriation of the Jordan Valley and other parts of the region was his priority among "four major immediate missions" and would take no longer than two months, Netanyahu told Israeli public radio on Sunday.

Annexing the West Bank has long been seen as an endgame for Palestinian hopes of statehood.

The widely criticised Middle East "peace" plan by Donald Trump, the US president, published in January, gave Israel the green light for the move. 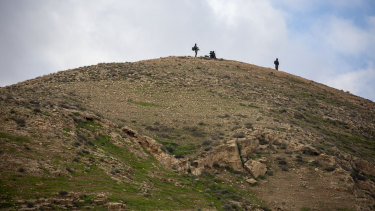 Israeli soldiers secures a hill as Israel’s Prime Minister Benjamin Netanyahu visits the Jewish settlement in the Jordan Valley near the Palestinians city of Jericho. Credit:AP

He says he will only form a partnership with Likud if Netanyahu steps down, while Netanyahu, who faces corruption charges in two weeks, says he must remain prime minister.