Washington: Almost 90 per cent of people are biased against women, according to a UN report that warns progress towards gender equality is "getting slower and more difficult" in some areas.

Despite decades of progress in advancing women's rights, 91 per cent of men and 86 per cent of women hold at least one bias against women when it comes to politics, work, economics, education, domestic violence or reproductive rights.

The Gender Social Norms Index report published on Thursday by the UN Development Program (UNDP), also suggested advances in gender equality had created a "backlash" in attitudes, with the proportion of people expressing bias actually growing in 15 countries over the past few years. 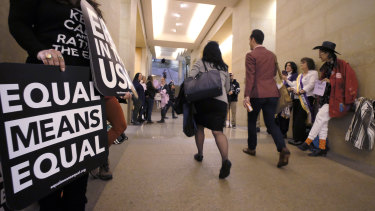 Supporters of the Equal Rights Amendment in Virginia, US, yell encouragement to two legislators as they walk down a hallway inside the state Capitol in Richmond in January.Credit:Richmond Times-Dispatch/AP

The figures were compiled using the first gender social norm index that analysed data from 75 countries and territories which together account for 81 per cent of the global population.

It found that around half of the men and women surveyed believe men make better political leaders, more than 40 per cent felt that males made better business executives and almost 30 per cent thought it was justifiable for a man to beat his partner.

"Over the past decade, it's clear that gender inequality is slowing down," Heriberto Tapia, one of the lead researchers, said. Tapia pointed to the fact that the number of female heads of government has fallen to just 10 out of a possible 193. 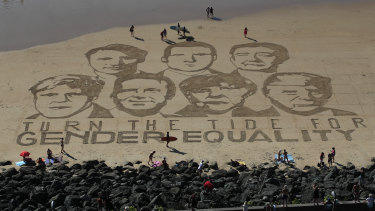 A portrait of G7 leaders is drawn into the sand over the headline ‘Turn the tide for Gender Equality’ in Biarritz, France, ahead of the 2019 summit.Credit:AP

The report said that while men and women vote at similar rates, only 24 per cent of parliamentary seats worldwide are held by women. Women in the labour market are paid less than men and are much less likely to be in senior positions: less than 6 per cent of CEOs in S&P 500 companies are women, it said. And while women work more hours than men, the work is more likely to be unpaid care work.

"We also see in the MeToo movement that women feel something is missing and people in power are not responding," he said.

Out of the 75 countries surveyed, there were only six in which the majority of people did not express some form of bias against women – Andorra, Australia, the Netherlands, New Zealand, Norway and Sweden.

But Sweden was also one of several countries, including Germany, India and Mexico, in which the percentage of people who held at least one bias increased over the nine years that the data covered.

More than half of people in the UK held at least one bias. Tapia said one hypothesis for the slowdown in progress was ingrained prejudices.

"Until now, policies have been addressing basic issues in the fight for parity. For instance, a few decades ago, there was a big gap in the education of boys and girls: that gap has been reduced," he said.

"That's the basic part of the story. In the UK, the years of education of men and women is roughly the same. However, women get 44 per cent less income than men," he said.

The UNDP called on governments and institutions to use a new generation of policies to change these discriminatory beliefs and practices through education, and by raising awareness and changing incentives. For example, by using taxes to promote fair sharing of childcare responsibilities, or by encouraging women and girls to enter traditionally male-dominated sectors.

"We have come a long way in recent decades," said Pedro Conceição, also of the UNDP. "But gender gaps are still all too obvious in other areas, particularly those that challenge power relations and are most influential in actually achieving true equality. Today, [it] is a story of bias and prejudices."