The BNP Paribas Open tennis tournament has been cancelled amid a coronavirus outbreak in Califoria, marking the first major sporting event in the US to be axed due to the contagious disease.

The professional tennis tournament, which draws athletes from around the world such as Serena Williams and Rafael Nadal and thousands of fans, was slated to take place from Monday March 9 to March 22 in Indian Wells, California.

Officials made a decision late Sunday to cancel the tournament declaring a public health emergency.

‘It is not in the public interest of fans, players and neighboring areas for this tournament to proceed. We all have to join together to protect the community from the coronavirus outbreak,’ the tournament released in a statement. 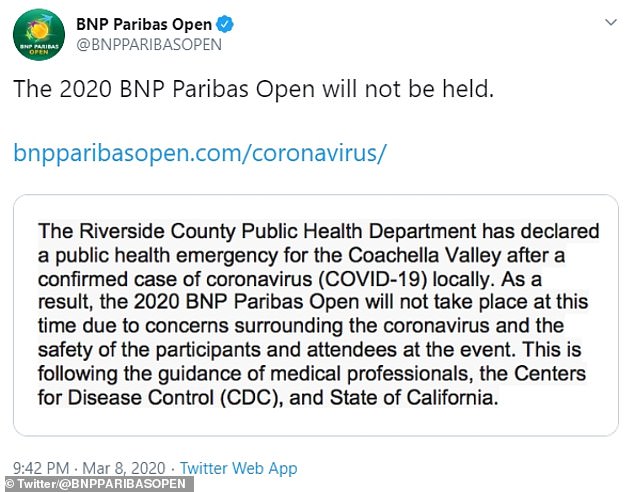 The BNP Paribas Open tennis tournament has been cancelled amid a coronavirus outbreak in Califoria, marking the first major sporting event in the US to be axed due to the contagious disease

California has reported 114 cases of the virus, including a patient being treated at a hospital in Rancho Mirage in Riverside County.

In the US there are over 500 cases and 22 deaths reported so far.

‘The Riverside County Public Health Department has declared a public health emergency for the Coachella Valley after a confirmed case of coronavirus (COVID-19) locally,’ a statement posted to the event’s website late Sunday read.

‘As a result, the 2020 BNP Paribas Open will not take place at this time due to concerns surrounding the coronavirus and the safety of the participants and attendees at the event. This is following the guidance of medical professionals, the Centers for Disease Control (CDC), and State of California.’

“There is too great a risk, at this time, to the public health of the Riverside County area in holding a large gathering of this size,’ Dr. David Agus, professor of medicine and biomedical engineering at the University of Southern California said in the statement.

The tournament was set to take place in Indian Wells, just about five miles away from Indio, California where the annual Coachella Music Festival takes place.

BNP fans who purchased tickets to the event can get a refund or receive a credit for the event in 2021.

While organizers declared the event canceled and are offering 2021 credit, tournament director Tommy Haas’ statement was a little more ambiguous when it comes to when the event may next be held.

‘We are very disappointed that the tournament will not take place, but the health and safety of the local community, fans, players, volunteers, sponsors, employees, vendors, and everyone involved with the event is of paramount importance. We are prepared to hold the tournament on another date and will explore options,’ Haas said in the statement. 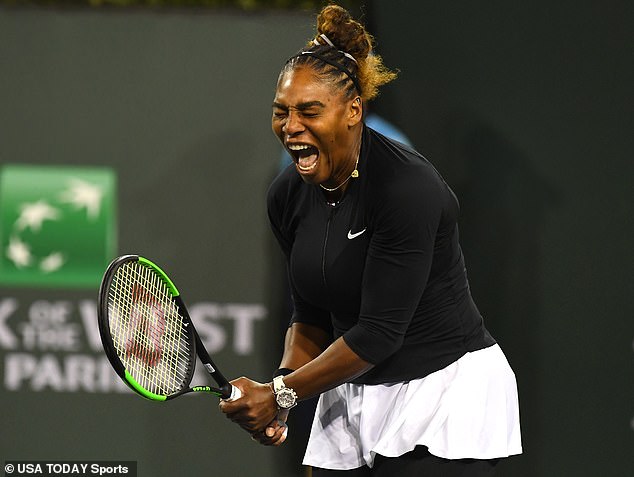 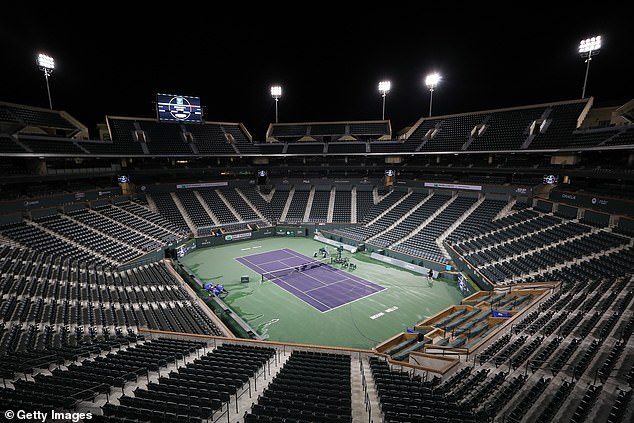 The tournament is one of the more popular stops on both the WTA and ATP tours, often called tennis’ ‘fifth slam.’  Over 450,000 fans attended the ‘Fifth Slam’ tournament in 2018 and in 2019. The empty Insian Wells Tennis Garden pictured Sunday

The tournament is one of the more popular stops on both the WTA and ATP tours, often called tennis’ ‘fifth slam.’

According to even organizers, the 2019 installment of the tournament saw a record 475,372 fans attend the two-week event.

Canadian Bianca Andreescu became the first wild card to win the event on the women’s side last year, beating Angelique Kerber in the final, while Austria’s Dominic Thiem upset Roger Federer to win the men’s title in 2019.

The purse for this year’s event was more than $8.5 million for each tour.

While organizers for Coachella have not cancelled the festival after the coronavirus case, other festivals across the nation have axed their programming.

So far the Ultra Music Festival in Miami and the SXSW Festival in Austin, Texas have been cancelled.