A West Australian bookstore owner who this week pulled copies of JK Rowling's Harry Potter series from his shop's shelves amid allegations of transphobia levelled at the author has described the reaction from some members of the public as "pretty disgusting". 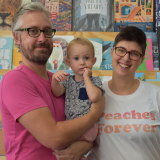 On Tuesday, the couple took to Facebook and posted on Rabble's page their decision "not to put books by transphobes on the shelves, when we know about them".

"We are always trying to make Rabble a safer space for our community," the post read. "We’re not going to stock new JK Rowling books and we won’t be keeping Robert Galbraith books (Rowling's pseudonym for her crime novels) on the shelf anymore.

"Though we don’t sell many, we’re going to phase out the Harry Potter books too."

Prompting the book shop owners' course of action was the release of Rowling's latest crime novel Troubled Blood, in which a cross-dressing serial killer features as a suspect in a cold-case murder investigation. Critics believe the suspect plays into tropes of trans people as dangerous and threatening, although the character is not presented as transgender and cross-dressing is not a major plot point.

But Mr Baker, who has not read Rowling's latest release, also pointed to recent social media posts by the world-famous author some have perceived as transphobic.

In June, Rowling mocked an opinion piece referring to "people who menstruate" with a Twitter post saying: "I’m sure there used to be a word for those people. Someone help me out. Wumben? Wimpund? Woomud?"

She has tweeted her support for those opposing government reform making it easier for trans people to change their legal sex, and also said she believed trans-inclusive language "strikes many women as dehumanising and demeaning". Rowling has, however, won the backing of feminists who believe that sex is biological and struggle to see gender fludity as empowering for women. 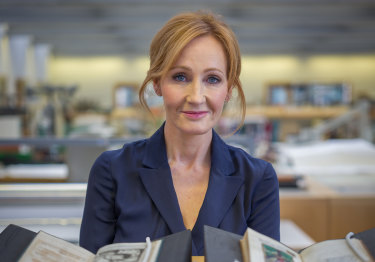 Author J.K. Rowling and those who agree with her opinions on transgender people have faced a tsunami of criticism.Credit:BBC

"JK Rowling is such a huge deal," Mr Baker said. "She's such a big part of the publishing industry. This decision required a lot of conversation around it."

Describing the reaction from customers and the local community following their decision to pull Rowling's books from Rabble shelves as "overwhelmingly positive", Mr Baker said there were plenty of others – "people who are mostly from overseas and not our customers" – who had been "really awful" and transphobic.

"Most of the people for whom we made this decision understand exactly why we've done this," he said.

"The outpouring of support from our community has been really quite lovely, but any time you make a decision based on your principles you're going to have put up with dickheads, too.

"I mean, you pick your battles, but this is important."

Mr Baker said the curation process for Rabble Books was constant, and denied he was engaging in censorship.

"It's not for us to tell people what to read or not to read," he said.

"We'll be fulfilling customer orders, we just won't be keeping [Rowling's books] on our shelves.

"We're not going to stop other people from reading it."

Troubled Blood already looks set to be an Australian bestseller, with a spokeswoman from the book's publishing company confirming more than 35,000 copies had been sent to local bookshops, making it the biggest Robert Galbraith release for Australia on record.

Related posts:
September 18, 2020 World News Comments Off on Bookshop refuses to stock JK Rowling novels over ‘transphobia’ furore
Celebrity News:
Who Is Karlie Kloss’s Husband Joshua Kushner? The Entrepreneur Is More Than His Brother’s Politics
Anton Du Beke: Strictly pro plants cheeky kiss on Jacqui Smith amid ‘telling off’
The truth about Jennifer Grey and Johnny Depp’s romance
Chantelle Houghton has invited ex-husband Preston to her wedding and insists her fiancé is ‘fine with it’
Nick Jonas Claims Magical Powers to Help Athletes Win, Opposite of Drake Curse!
Recent Posts
This website uses cookies to improve your user experience and to provide you with advertisements that are relevant to your interests. By continuing to browse the site you are agreeing to our use of cookies.Ok