Bristol has been hailed the most environmentally-friendly city in the UK while Birmingham tops the list as the least eco-friendly.

A new study by Good Move, the regulated property buyer, ranked the cities, from number one to five, based on a check list of sustainability factors.

When it came to carbon emissions, recycling rates and gas consumption, Bristol came out on top when compared to other cities. 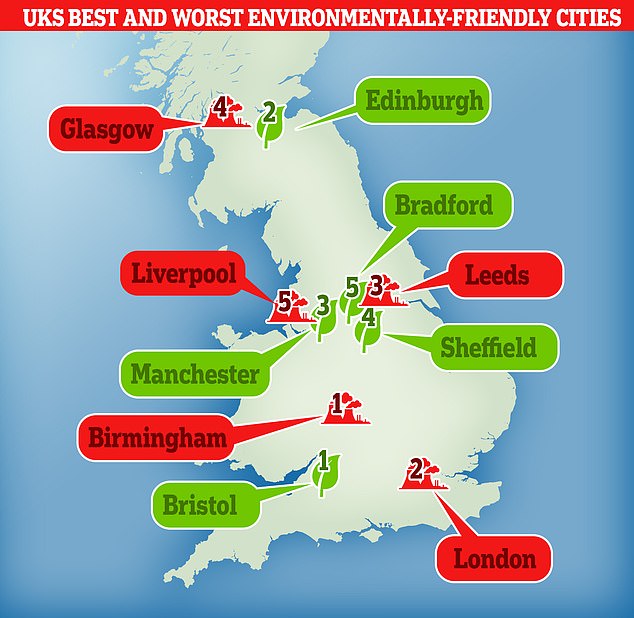 A new study by Good Move, the regulated property buyer, ranked the cities based on a check list of sustainability factors

The city’s residents recycle or compost 47 percent of their household waste – six percent more than anywhere else. Bristol is also the only city in the UK to consume less than 3,000 kw/h of gas a year.

In contrast, Birmingham was named the least environmentally-friendly city.

It was found to have poor recycling and emission statistics, with residents only recycling 22 percent of their waste, this was the lowest in the UK. Only London has worse carbon emission and gas consumption figures and places second in the list of the least eco-friendly cities.

The capital was also found to perform poorly in most categories, producing more carbon emissions, a whopping 29,709 tonnes and consuming more gas, 61,546 kw/h, than the other nine major cities combined.

At the other end of the scale, Edinburgh took second spot as the most environmentally-friendly city in the UK with a large amount of publicly available green space.

With 49 hectares, Edinburgh has more green space than any other UK city.

Ross Counsell, Director at Good Move, said: ‘The world is finally waking up to the dangers of climate change and the impact that our lifestyles are having on the planet.

‘Our research has highlighted which UK cities are particularly guilty of being unsustainable, while also praising those who are taking steps to address the issues. However, progress can only be made if the country works together as a whole, making informed changes on a national scale.’

The five most environmentally-friendly UK cities are: