London: Britain recorded the highest number of new cases of COVID-19 since July over the past week, government figures showed, a day after Prime Minister Boris Johnson played down the prospect of a return to lockdown.

Some 333,465 people in Britain tested positive for COVID-19 over the past seven days, up 15 per cent on the previous week and the highest total since the seven days to July 21, the week that England celebrated the easing of restrictions on “freedom day”. 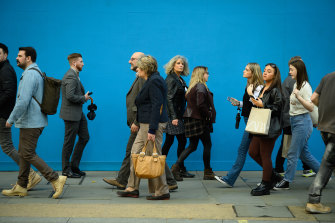 Daily figures showed there were 44,985 new cases on Saturday, down from 49,298 on Friday. Daily death figures were only available for England, and showed 135 fatalities within 28 days of a positive test.

Deaths have risen by 12 per cent over the past week, and the total since the start of the pandemic now stands at 139,461, the second highest in Europe after Russia.

While vaccination and better medical treatment have sharply reduced deaths compared with previous waves of the disease, hospitals are already stretched and Britain’s current death rate is far higher than many of its European neighbours.

Government health advisors said on Friday that preparations should be made for the possible reintroduction of measures to slow the spread of the disease, such as working from home, as acting early would reduce the need for tougher measures later. 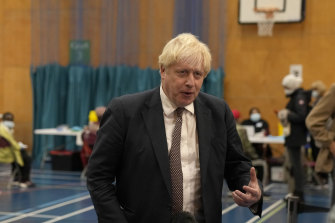 British Prime Minister Boris Johnson speaks to the media as he visits a COVID-19 vaccination centre at Little Venice Sports Centre, in London on Friday.Credit:AP

Johnson, however, said he did not expect a return to lockdown.

“We see absolutely nothing to indicate that is on the cards at all,” he said on Friday.

“The pandemic is not yet in the rearview mirror,” Schallenberg said. “We are about to stumble into a pandemic of the unvaccinated.”

Schallenberg announced that if the number of COVID-19 patients in intensive care units reaches 500, or 25 per cent of the country’s total ICU capacity, entry into businesses such as restaurants and hotels will be limited to those who are vaccinated or recovered from the virus.

If the number reaches 600, or one-third of total ICU capacity, the government plans to impose restrictions on unvaccinated people. In this case, they would only be allowed to leave their homes for specific reasons.

Currently, the number of COVID-19 patients in ICUs stands at 220.

Although Austria’s government has encouraged citizens to get vaccinated, the effort has slowed in recent months. About 65.4 per cent of the total population has received one dose of the vaccine, and 62.2 per cent are fully vaccinated.

Russia has reported a record high number of coronavirus infections and COVID-19 deaths as the country approaches a week of nonworking days aimed at stemming the sharp surge in cases.

The national coronavirus task force said on Saturday that 1075 people had died from the virus in the past day and that 37,678 new infections were tallied — the largest single-day numbers of the pandemic.

The daily death toll is about 33 per cent higher than that recorded in late September and infection cases have risen by about 70 per cent in the past month.

Only about one-third of Russia’s 146 million people have been vaccinated, frustrating officials and placing a strain on the country’s health-care system.

Serbia is set to launch partial COVID-19 passes while Croatia and Slovenia reported high daily rates of infections, as virus continues to surge in the Balkan nations with low vaccination rates.

Serbia has seen thousands of news cases daily for weeks now and recorded more than 50 deaths each day, in the country of 7 million where about half of adults have been fully jabbed and tens of thousands have received booster doses.

On Saturday, authorities reported an additional 6748 new infections in the past 24 hours and 60 fatalities from COVID-19. Serbia has confirmed more than 1 million infections since the start of the pandemic and nearly 10,000 deaths.

Experts have harshly criticised the government decision to introduce COVID-19 passes for indoor spaces only from 10pm. They said the move was too little too late and that stricter measures are needed to curb the raging virus.

Serbia’s government initially was reluctant to impose any measures, urging people to get vaccinated instead. Face masks have been obligatory indoors in the Balkan country but there have been no limits for gatherings or work at nightclubs, bars or restaurants.

Starting Saturday evening, visitors will have to provide COVID-19 passes showing evidence of vaccination, a negative test or that they have recovered from the disease in the past seven months. Officials said more than 2,000 inspections will control whether the new rules are being implemented.

The virus situation has been alarming also in other countries of Central and Eastern Europe where vaccination rates are lower than the European Union average. Romania has approved the tightening of rules from Monday as hospitals filled up and infections soared to record numbers.

Slovenia on Saturday said the number of confirmed daily cases has reached a nine-month high and a positivity rate of about 30 per cent in the country of about 2 million people. Slovenia has fully vaccinated 53 per cent of the population of 2 million. Just over 5000 people have died of COVID-19.

Croatia too is reporting a surge in daily new cases to more than 3500 over the past days — the daily number of confirmed cases has risen by 1600 since last weekend, authorities said.

The government so far has imposed COVID-19 passes for the health and social service workers, but not the general population. Interior Minister Davor Bozinovic on Saturday called on citizens to vaccinate — Croatia’s vaccination rate also stands at around 50 per cent.

“Vaccination is seen globally as the best solution and we must all help those citizens who still have doubts to decide in favour of it,” he said.