Britain has suffered 355 more coronavirus hospital deaths, falling by almost 30 per cent in a week, it was announced today.

A total of 307 patients died in England, alongside 29 in Scotland, 16 in Wales and three in Northern Ireland. The number of Covid hospital deaths previously rose by 513, in what was the lowest toll on a Saturday in six weeks.

The Midlands recorded the most hospital fatalities in the country with 69 deaths, followed by the north-west at 59, the north-east and Yorkshire at 53 and London, which reported 45 deaths.

A further 803 new cases of coronavirus have been confirmed in Scotland in the last 24 hours, with the test positivity rate standing at 4.6 per cent and 102 people in hospital with recently-confirmed Covid-19.

It comes ahead of Boris Johnson’s plan to unveil his ‘roadmap’ out of lockdown on Monday, likely announcing that families and friends will be reunited by Easter.

The Prime Minister is poised to allow more social mixing within weeks, providing a light at the end of the tunnel for millions of grandparents isolated from their grandchildren.

A Whitehall source said rules around how many people they can spend time with outdoors will be relaxed. Ministers are looking at the data and a final decision on when the restrictions will be eased will be taken at the weekend.

It means friends and family could be able to see each other again in time for the Easter holidays. The Prime Minister will spend the weekend putting the finishing touches to his long-awaited roadmap, before he announces it on Monday. 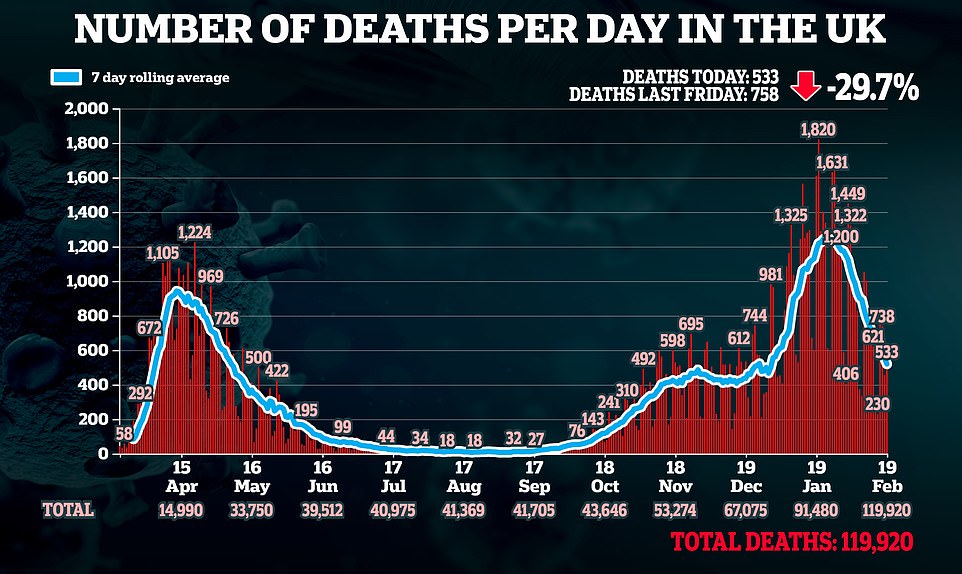 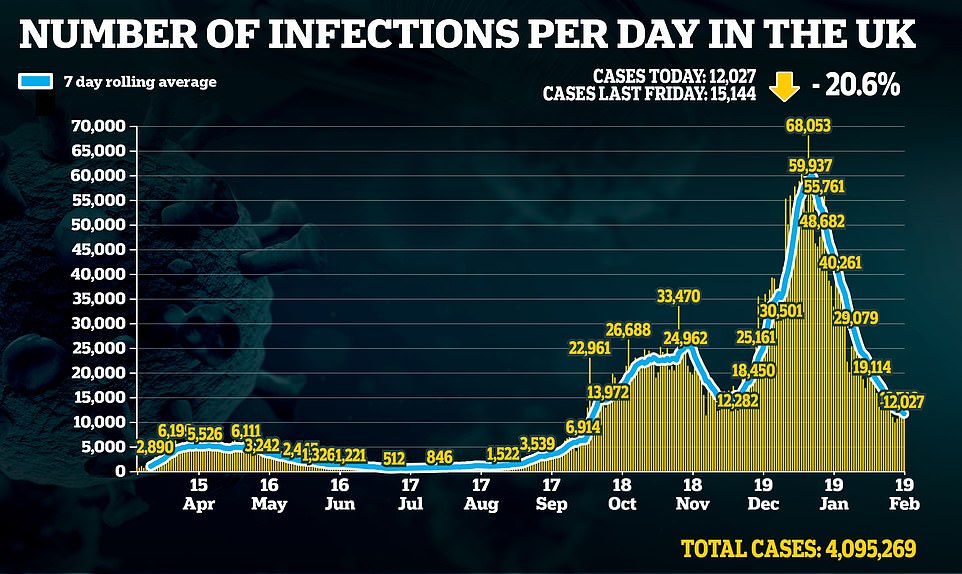 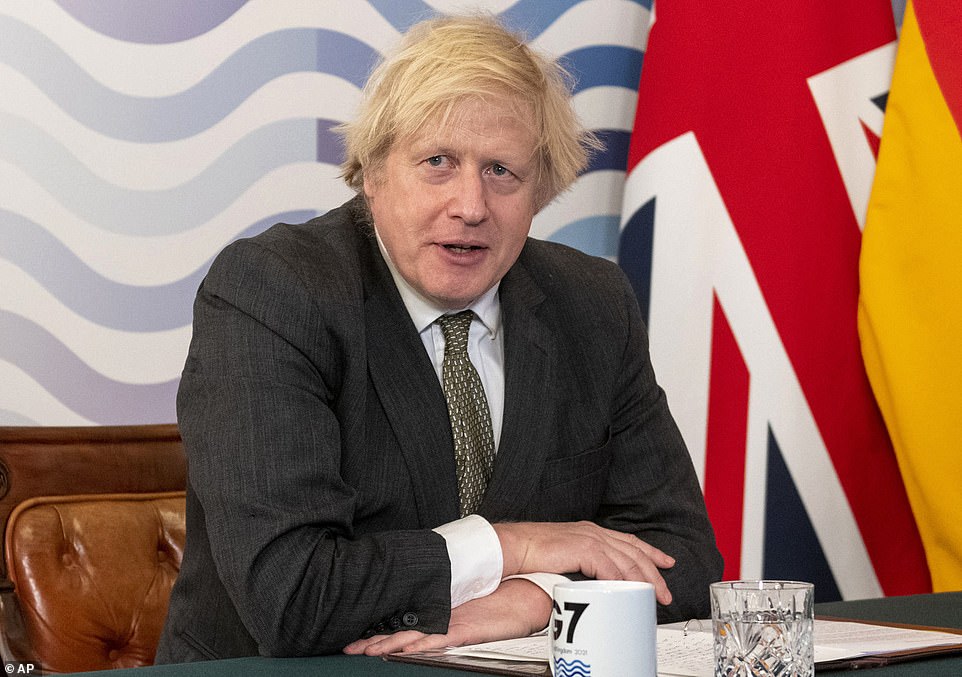 Boris Johnson (pictured yesterday, hosting a virtual meeting of G7 leaders) is poised to allow more social mixing within weeks, providing a light at the end of the tunnel for millions of grandparents isolated from their grandchildren 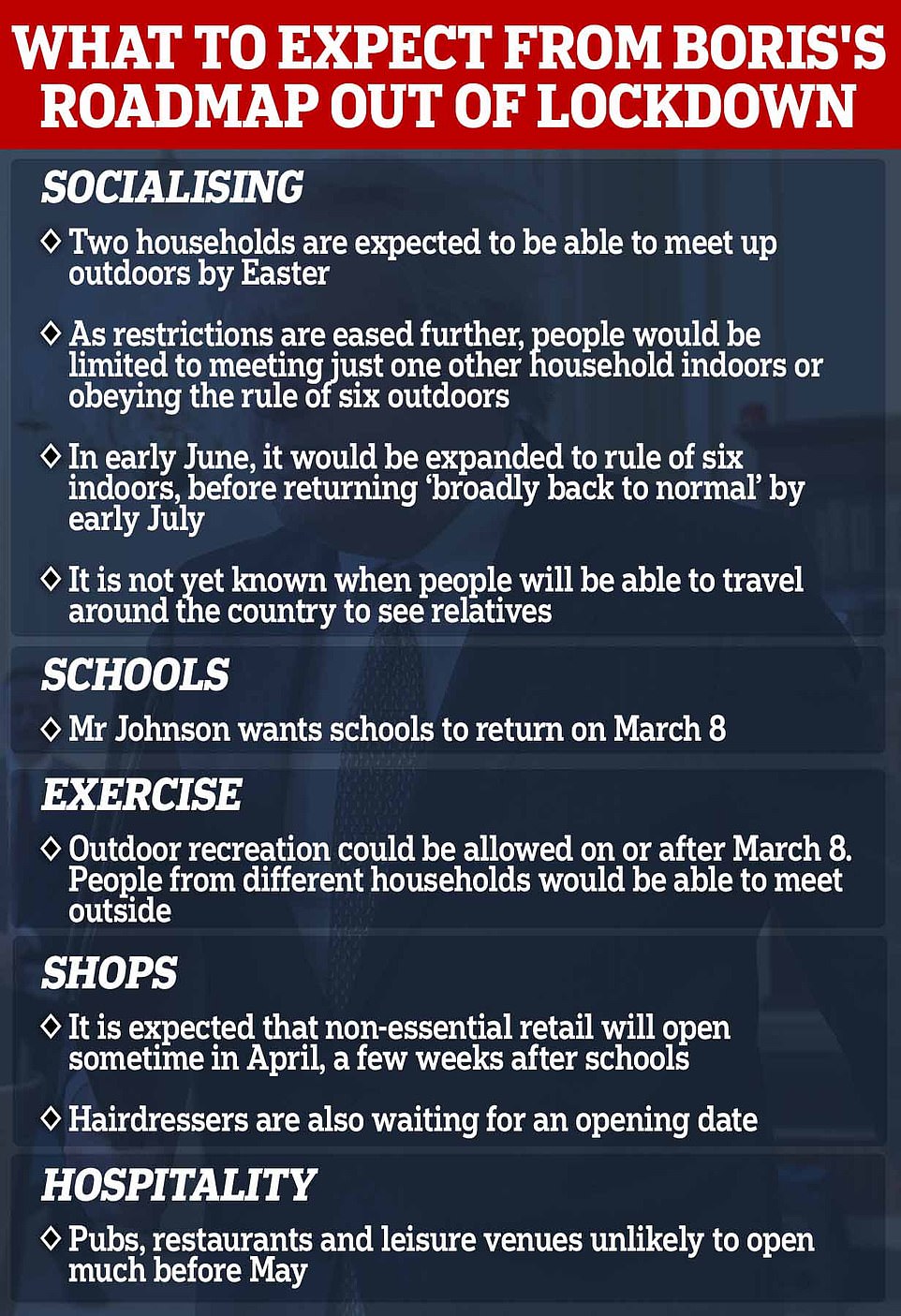 It is thought the new plan could replace the ‘Rule of Six’ as entire families, regardless of size, are expected to be allowed to meet up in outside spaces.

Relatives who live further away from each other may have to wait a little longer for a reunion, as the future rules on travelling longer distances are still unclear. And in the case of those who do meet up, the two-metre rule is expected to remain in place for months to come.

Mr Johnson is set to meet senior ministers tomorrow to hammer out the final details. The committee will examine the latest data on the impact of lockdown and the vaccine rollout, so they can decide how quickly to lift restrictions.

Cabinet will then rubber stamp the plans on Monday morning, before they are revealed to the Commons that afternoon.

The blueprint is likely to see schools return on March 8 along with more relaxed rules on outdoor exercise; the return of outdoor sports like golf and tennis at the end of next month and non-essential shops opening soon after Easter. 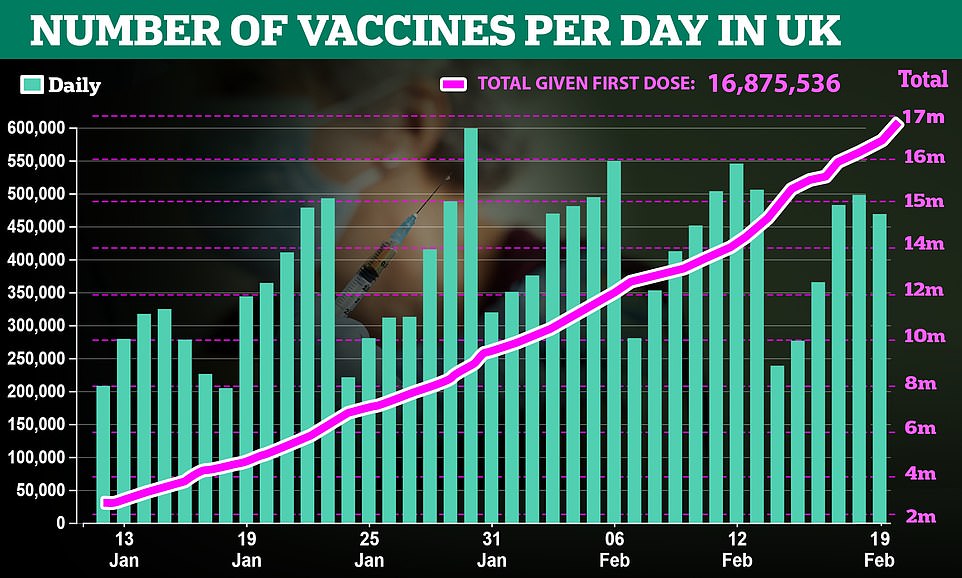 Pubs and restaurants may also be able to serve people outdoors from April – although not indoors until May.

Ahead of revealing his roadmap out of lockdown, Mr Johnson has also been urged to allow pubs to reopen as soon as possible.

Beer sales in pubs dropped by 56 per cent in 2020, a decrease of £7.8billion, due to Covid-19 restrictions and the lockdowns, according to British Beer & Pub Association (BBPA) figures.

Emma McClarkin, BBPA chief executive, believes that pubs should reopen alongside non-essential retail once the most vulnerable in society have been vaccinated, as they have a community role.

There are also fears over workers being made homeless as tens of thousands of pubs are small family businesses which also double up as someone’s home, the BBPA said.

It comes as the Government was last night forced to deny that Chris Whitty feels ‘very unhappy’ about plans for a ‘big bang’ reopening of schools on March 8.

Downing Street knocked down claims the chief medical officer has concerns a full return – rather than a staggered approach call for by unions – will cause a spike in infections.

Prime Minister Boris Johnson has made clear his ambition for all 10 million schoolchildren and staff to return on March 8. The children would be tested for coronavirus twice a week in an effort to control the spread of the virus.

But education sources told The Guardian Mr Whitty was ‘very unhappy’ with the plan. Some officials are concerned a mass return will both rise infection rates and pose problems with administering covid tests to pupils.

Both ministers and senior advisers want Mr Whitty to publicly back a full return, but he is said to be ‘lukewarm’.

The Government was forced to deny last night that Chris Whitty felt ‘very unhappy’ about plans for a ‘big bang’ reopening of schools on March 8.

Downing Street knocked down claims that the chief medical officer had concerns that a full return – rather than the staggered approach called for by unions – would cause a spike in infections.

Boris Johnson has made it clear that he wants all ten million schoolchildren and staff to return on March 8.

But education sources told The Guardian Mr Whitty was ‘very unhappy’ with this. 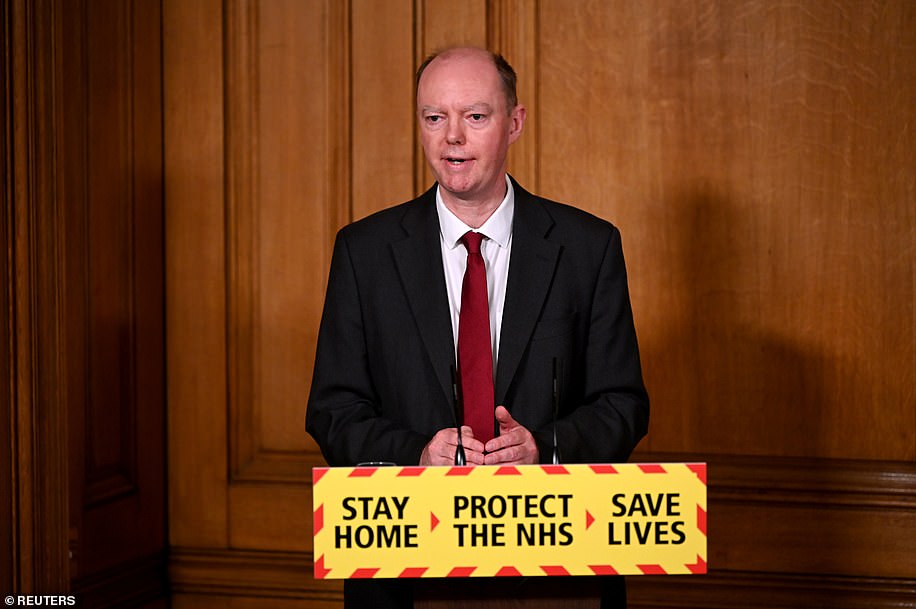 Downing Street knocked down claims that the chief medical officer had concerns that a full return – rather than the staggered approach called for by unions – would cause a spike in infections. Pictured, Chris Whitty

Ministers and senior advisers want Mr Whitty to back a full return publicly, but he is said to be ‘lukewarm’.

Last night, a Department for Education source branded the claim ‘absolute b******t’, and a Government source also said it was ‘categorically untrue’.

The Scientific Advisory Group for Emergencies (Sage), which advises the Government, has modelled the impact of sending all children back at once against a staggered, year-by-year approach.

It believes the first option will lead to a bigger rise in the so-called ‘R value’ – which measures how quickly the virus will spread. But it insists ministers must weigh up the risks against pupils’ wellbeing.

Officials including Mr Whitty have repeatedly stressed the damage to children of being forced to stay at home. 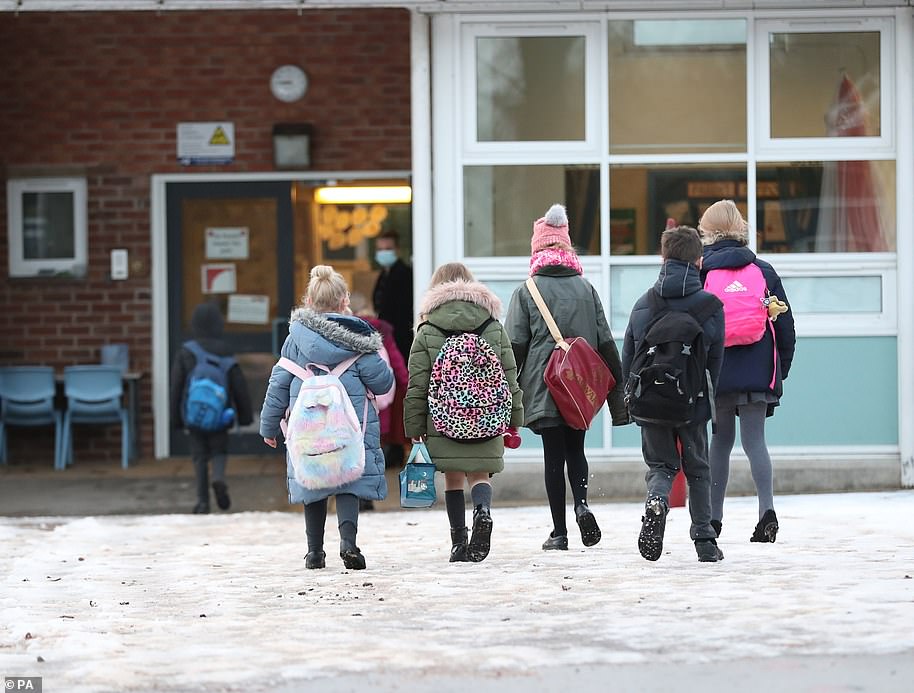 The Scientific Advisory Group for Emergencies (Sage), which advises the Government, has modelled the impact of sending all children back at once against a staggered, year-by-year approach. Pictured, children arriving at Manor Park School in Cheshire last month

Unions want a phased return. Nine organisations representing teachers, heads, support staff and governors united to warn against the Prime Minister’s plan. They said getting all children back at once on March 8 seemed a ‘reckless action’ that could ‘trigger another spike in Covid infections, prolong the disruption of education and risk throwing away hard-won progress made in suppressing the virus’.

In a statement, they called on the Prime Minister to only commit to the March 8 date if the scientific evidence was ‘absolutely clear that this is safe’, and he should ‘go no further than a phased return’.

Mr Johnson is due to set out a roadmap out of lockdown on Monday. But Geoff Barton, of the Association of School and College Leaders, wrote on the Times Educational Supplement website to urge caution rather than ‘risking a big bang that could blow up in our faces’.

A Department for Education spokesman said: ‘Schools are the best place for young people’s education, development and wellbeing. Pupils will return from March 8 at the earliest.’