Britain’s coronavirus lockdown is one of the toughest in the WORLD with Ireland the only stricter Western nation, study reveals

Britons are living under the sixth strictest lockdown in the world – and the second harshest in Europe – according to an analysis by the University of Oxford.

Researchers have ranked the pandemic responses of 180 countries on a ‘stringency map’ by looking at how Covid restrictions have affected schools, offices, social gatherings, international travel and freedom to leave home.

Each country was scored on a scale of one to 100, with a higher figure indicating the most severe virus-controlling curbs. The numbers represented an average since the start of the pandemic.

They put Britain’s restrictions at 86.11 out of 100 by February 17, using the latest available data.

The UK is in total lockdown with people only allowed to leave their homes for essential shopping, medical visits or work that can’t be done from home. International travel and socialising in person are banned, and most shops are closed.

Germany’s lockdown is similar but restrictions on social meetings are looser, with people allowed to meet with one individual from another household and work-from-home instructions less strict.

The US is divided, with some states not imposing stay-at-home directives and varying levels of restrictions across the country.

And France is relying on a curfew rather than a lockdown, forcing people to stay home between 6pm and 6am each day. Schools there remain open as usual, unlike in Britain and Germany.

Compared to the UK, the Republic of Ireland was the only place in Europe that had stronger lockdown rules (87.96), the study said. Ireland’s rules are similar to England’s but most construction work has been stopped and click-and-collect shopping services are not allowed.

The Coronavirus Response Tracker shows the differences between countries in an interactive map. 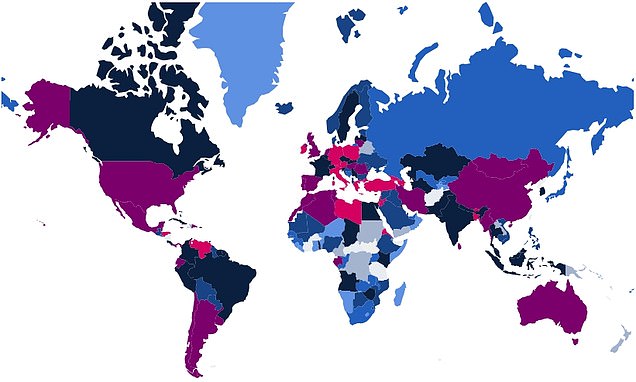 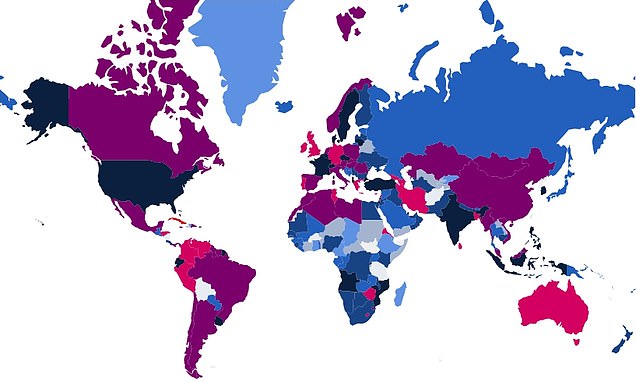 A map shows how lockdown rules have differed over time, with darker colours indicating harsher rules. Restrictions on January 1 (left) and February 17 (right) are the latest available. Light blue indicates a score up to 39.9 out of 100, and dark blue shows from 40 to 59.9. Black shows between 60 and 69.9, purple shows between 70 to 79.9 and pink/red indicates the highest score from 80 upwards

WHICH COUNTRIES HAD THE MOST SEVERE LOCKDOWNS?

Source: Calculated by the University of Oxford’s Coronavirus Response Tracker. It is for restrictions as of February 17, the latest available.

Britain’s lockdown was ratcheted up over Christmas with the discovery of the Kent variant, which is believed to spread significantly faster than older versions of the virus.

The variant – which was first detected in the UK and now makes up a majority of cases there – made controls that had worked against the old virus less effective, forcing ministers to impose tighter curbs.

They used 19 indicators for the scores – which also included closing public transport, restrictions on internal movement and income support.

Data on restrictions is collected from public sources by a team of more than a hundred students and staff at Oxford University.

‘The UK has done a lot in this third lockdown and introduced some stringent measures,’ he said.

‘One of the main factors is the school closures, whereas most of Europe have tried to keep schools open.

‘It would make sense for the UK to have a higher score as it has been hard hit and there have been stringent measures.

‘If you take France, they have tried to make things work with a curfew rather than a blanket stay-at-home message.

‘The French also have a wider definition of what is essential and no restrictions on being able to move around, whereas you obviously can’t go to other parts of the country here.’

It comes as Britain slowly begins to relax restrictions after six weeks of falling cases, hospitalisations and deaths due to the virus.

Scotland and Wales yesterday allowed children up to the age of eight to return to school, and England is set to bring all pupils back to the classroom on March 8.

Announcing his roadmap out of lockdown yesterday Boris Johnson warned they would be led by the ‘data not dates’, but that he hopes to relax restrictions in five-week stages. 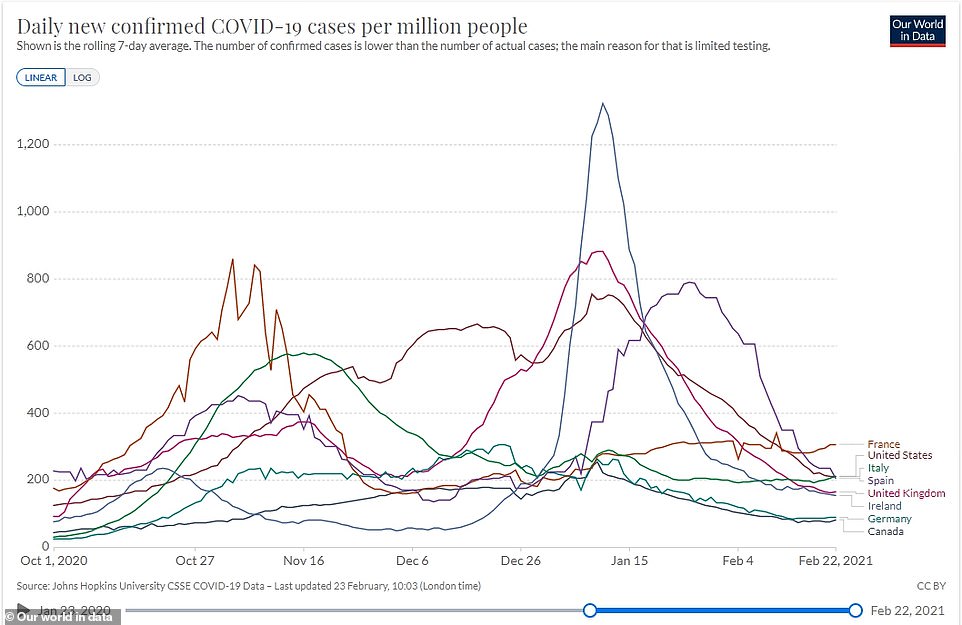 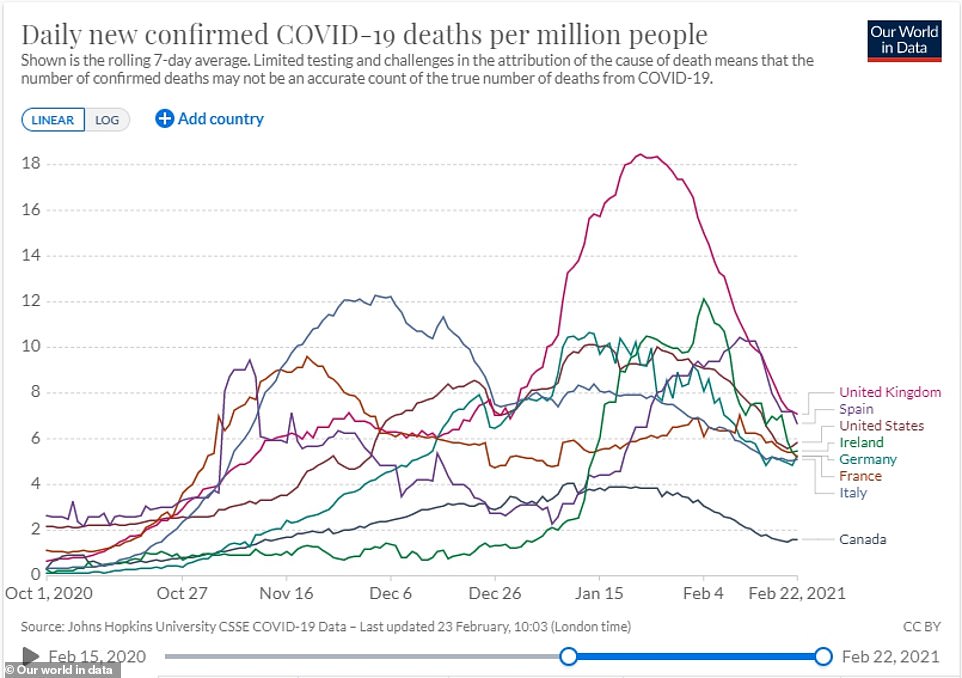 Mr Johnson’s plan will be split into four separate steps and will see the country treated as a whole, with no return to a tier system

The loosening of England’s third national lockdown, imposed amid a winter outbreak of coronavirus in January, will begin on March 8 when all schools across the country will return.

A different set of rules are then due to be lifted every five weeks to allow four weeks to measure the impact of changes and to give a further week’s notice before the next step comes into force.

However, the Government has stressed that dates could change depending on the scale of the coronavirus outbreak.

In his statement to the Commons, Mr Johnson said there are four tests for reopening the country: the success of the vaccine roll-out, evidence that Covid jabs are reducing hospitalisations, infection rates not putting ‘unsustainable pressure’ on the NHS, and whether the risks are ‘fundamentally changed’ by new variants.

The changes must be gradual, Mr Johnson said, because a third wave of the virus is inevitable and it must be controlled because vaccines aren’t perfect.

Speaking from a Downing Street press conference last night Mr Johnson said: ‘We’re now travelling on a one-way road to freedom and we can begin safely to restart our lives, and do it with confidence.

‘And I want to be frank about exactly what that means and the trade-offs involved.

The vaccines reduce the danger of Covid, they save lives and they keep people out of hospital. But no vaccine against any disease has ever been 100 per cent effective.

‘So, whenever we ease the lockdown – whether it’s today or in six or nine months – we’ve got to be realistic and accept that there will be more infections, more hospitalisations and therefore, sadly, more deaths, just as there are every year with flu.

‘Even if we sustained the lockdown indefinitely, which would itself cost lives and do immeasurable harm to our children, we would not be able to eradicate this disease.

‘And that’s why it’s right, gradually, to replace the protection afforded by lockdown, with the protection of the vaccines. And our approach is to move with the utmost care.’ 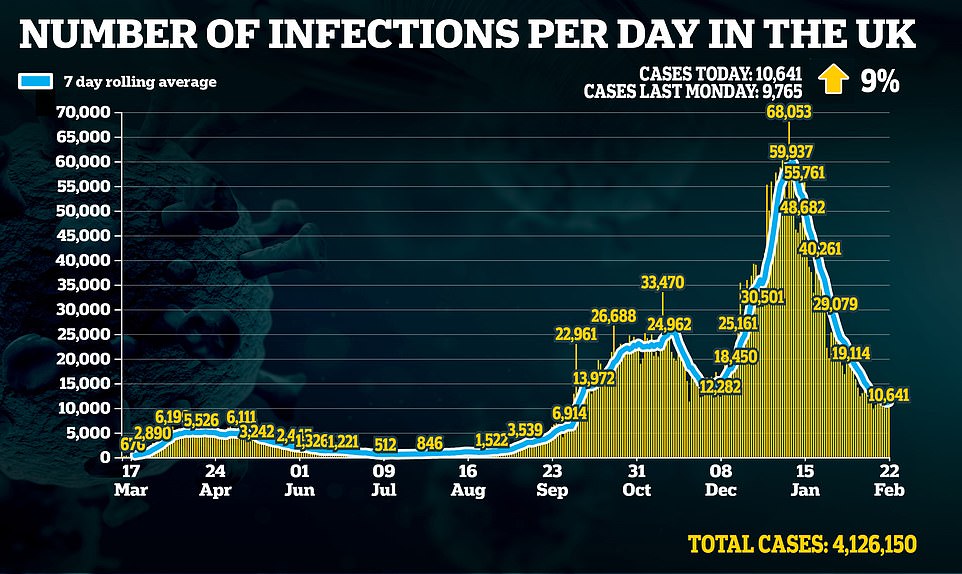 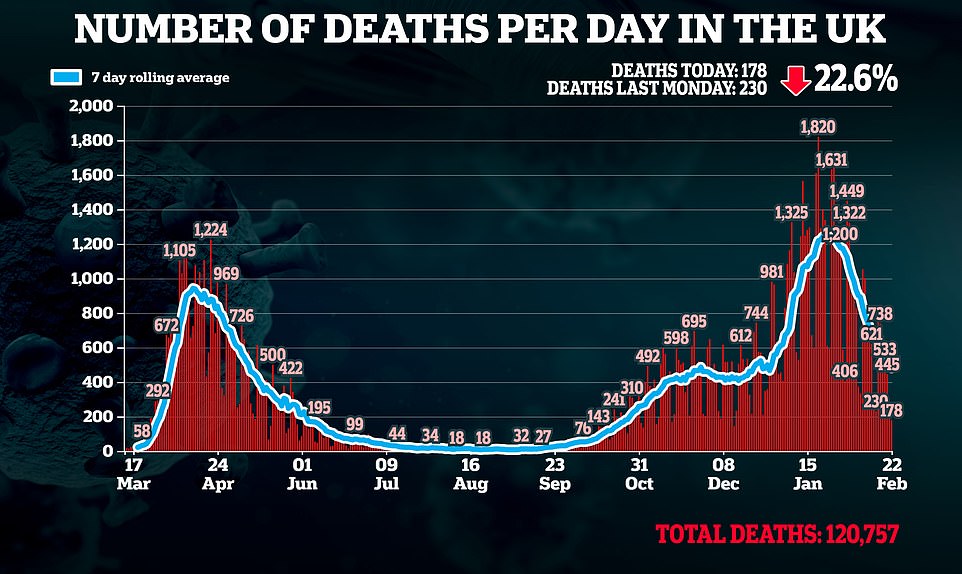 Related posts:
February 25, 2021 World News Comments Off on Britain's lockdown is one of the toughest in the WORLD, study claims
Celebrity News:
Jamie Lee Curtis Says a Minor Plastic Surgery Led to Her 10-Year Opioid Addiction
Mr Motivator held at gunpoint in terrifying home invasion in Jamaica
Dianne Buswell ‘would love to be with Joe forever’ as she talks marriage plans
Johnny Carson Said His Final Goodnight as Host of ‘The Tonight Show’ 30 Years Ago
Peter Pan's Arc in 'Rescue Rangers' Compared to Bobby Driscoll Tragedy
Recent Posts