London: The British public appears to have rejected a push by their farmers to paint Australian meat as substandard, as a new survey showed Australia was the first choice for Brits seeking to increase trade post-Brexit.

Buoyed by evidence of widespread support, Prime Ministers Scott Morrison and Boris Johnson are expected to announce the new Australia-UK free trade agreement on the sidelines of the G7 summit – the first since Britain voted to leave the EU freeing it to strike new trade deals. 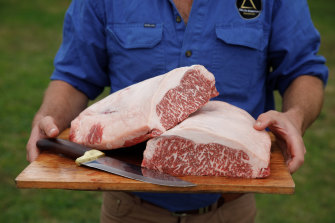 Brits indicated they want more Australian products on their shelves, including Australian beef, despite the concerns of some British beef farmers.Credit: Max Mason-Hubers

The new data, commissioned for the Adam Smith Institute (ASI) and conducted by the Australian-British polling firm C|T Group, found 66 per cent of Britons believe Australia has high food safety and animal welfare standards and only 6 per cent thought Australia had low standards.

The survey also showed that a free-trade deal with Australia is supported by 65 per cent of Brits, according to the London Telegraph. Australia also topped a list of nations the UK should increase trade with, ahead of the US, New Zealand, China and Japan.

Demands by Britain’s farmers for protections against increased imports of Australian beef had appeared a hurdle to a trade deal. However, the ASI data shows 63 per cent of Brits would support a trade deal with Australia even if it means that increased competition would reduce profits for British farmers and some might go out of business. Just 20 per cent would block a deal to prevent British farmers from having more competition. 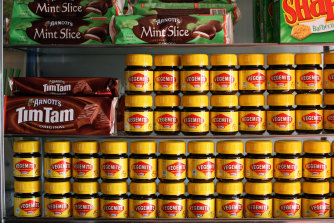 Brits are keen for more Australian fare on their shelves.

More than half – 52 per cent – would opt for Aussie steaks over British beef, only a quarter would prefer meat produced in the European Union.

And of the 1500 surveyed, 68 per cent rebuffed calls for a 15-year transition period for tariffs to be removed on Australian meat saying they wanted it on their plates within two years.

And the taste for Australian produce doesn’t stop at meat, with a majority saying they would buy more wine, a third wanted to buy Anzac biscuits and one-fifth hoped to try Tim Tams, kangaroo meant, lamingtons and even Vegemite.

A whopping 86 per cent said they wanted more trade with Australia, in stark contrast to the minuscule 4 per cent who said they would prefer trade with China was prioritised.

A senior source in the British government said of the data that the British were “right to have faith in the deal” and that it was a vindication of Brexit.

“We have so much in common with Australia,” the source told The Sydney Morning Herald and The Age.

“We are bound by shared values – we both believe in democracy, free trade and fair play – and have a fierce commitment to high standards.

“The chance to deepen ties with great friends like Australia is why we left the EU.”

The data is also being welcomed by Trade Minister Dan Tehan.

“There is nothing better than an Aussie steak cooked on the BBQ and a glass of Australian red wine after a long week at work,” Tehan said.

But Minette Batters from Britain’s National Farmers Union, which has led the campaign against Australian meat in the UK said there will still “unanswered questions” about how the deal.

“It is also incredibly concerning that the government is in a ‘sprint’ to sign up to a trade deal with Australia that would have serious implications for British farming and would seemingly offer incredibly little benefit to the economy,” Batters said.

“We remain of the view that it is wholly irresponsible for the government to sign a trade deal with no tariffs or quotas on sensitive products and which therefore undermines our own domestic economy and food production industry.”

“This is true whether tariffs are dropped immediately or in 15 years’ time.”

But Matthew Lesh from the ASI said the NFU was out of touch with mainstream Britain.

“From Australian wine, beef and Tim Tams to Scottish whisky and UK cars, we want to eat and drink each other’s finest products,” Lesh said.

“We want the ability to live and work in each other’s countries and to recognise our qualifications as equivalent.

“In an increasingly complex world, there’s a need for good mates not only to stick together but to become even closer. That’s what Australians and Brits want.”

However, Fiona Simson, president of the National Farmers Federation said she doubted their British counterparts had much to fear from the trade deal.

“Australian farmers pride ourselves on producing world-class beef and, in our opinion, the world’s most succulent lamb – of course, we’d love nothing better than to share this with the UK consumer, but only if they want it,” she said.

“The tyranny and cost of distance, and an insatiable and growing appetite for red meat on Australia’s doorstep means that the UK will be an important, but small export opportunity for Australia.

“The lion’s share of our red meat goes to our near neighbours: Indonesia, Vietnam, Korea, Japan. and China,” she said.

Britain imports 95 per cent of its beef from the European Union meaning those producers would be more likely affected before British farmers.