Young essential workers in supermarkets and food delivery should be vaccinated to stem the spread of coronavirus outbreaks, according to infectious diseases experts who called for a shake-up of the nation’s vaccine strategy.

Until now, health authorities have focused on getting Australia’s limited supplies of vaccine to older or vulnerable Australians and frontline workers. 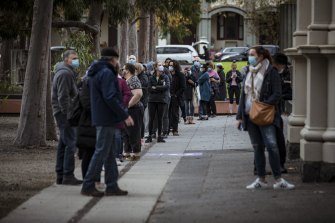 Lines snake around the Royal Exhibition Building in Carlton as people wait for their COVID-19 vaccinations. Credit:Chris Hopkins

But as Victoria’s outbreak grew by five people to 35 cases on Saturday, leading epidemiologist Mary-Louise McLaws called for all of the nation’s Pfizer supplies to be diverted to Melbourne.

The country’s vaccine advisory group, meanwhile, considered whether to roll out single doses of the jab to maximise those partially protected from coronavirus.

The call comes as the second doses of AstraZeneca begin from Sunday, meaning the number of daily doses is expected to significantly increase over the coming weeks.

The five cases detected in Victoria on Saturday followed a record 56,624 tests conducted on the second day of a week-long lockdown. Importantly, all five infections had known links to previous cases, with four connected to a worker from a food distribution centre who visited multiple exposure sites while infectious but did not show symptoms this week.

Technical faults at Melbourne’s two largest vaccination centres – the Royal Exhibition Building and Melbourne Convention and Exhibition Centre – sparked long lines and waits of up to six hours. After a record day of almost 22,000 jabs at state clinics the day before, both centres continued vaccinations on Saturday but were forced to temporarily pause walk-in appointments.

The Health Department was also prioritising contact tracing at Mount Ridley College in Craigieburn, in Melbourne’s north, where a close contact of the delivery driver is a student. The entire school community has not been asked to self-isolate. The health and education departments were instead reaching out to those who had been in contact with the positive case.

Professor McLaws said all Australian supplies of Pfizer that are not needed for priority groups should be sent to Melbourne.

She argued that health authorities had got their focus wrong –it was now younger people who needed to be prioritised for the vaccine.

People in their 20s and 30s should be given the vaccine first, she said, because they were most likely to catch and spread the disease as previous outbreaks had illustrated.

“The elderly will be protected with AstraZeneca; by all means continue to do their AstraZeneca, but donate every single Pfizer dose down in Melbourne,” Professor McLaws said. 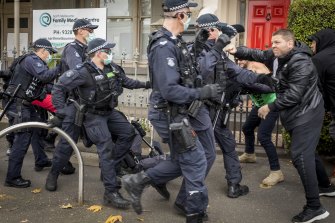 Professor Nancy Baxter, the head of the Melbourne School of Population and Global Health, said if vaccination was to be expanded to younger groups it should target essential workers such as delivery drivers, who are unable to work from home during Victoria’s lockdown.

The clinical epidemiologist said coronavirus would continue to circulate in places like distribution centres, abattoirs and grocery stores that could not shut down, and she suggested outreach vaccination teams may be deployed to essential workplaces.

“If we think their work is essential enough that they need to keep on going to work, no matter how bad things get, they deserve to be vaccinated,” she said.

However, senior federal government sources said it was unlikely such a major change to the rollout of the Pfizer vaccine would be recommended – nor was a shift to allow people in their 40s to receive the AstraZeneca jab likely – though the rollout was under “constant review”.

The Victorian government received 71,000 Pfizer doses from the federal government on Friday and had held back significant inventory, which had allowed it to open up the jab to people aged 40-49 last week.

Professor James McCaw of the University of Melbourne said the next few days would be crucial in containing the state’s outbreak and determining whether lockdown would be extended beyond one week.

“What we will need to see is the cases that arise in people who have been in quarantine at least two or three days before showing symptoms, that would mean they haven’t passed it on to someone else,” he said.

“We might know that in the next week. That would let the government consider lifting the lockdown. You would still have some cases around, they would be just known and managed.”

However, Professor McCaw cautioned it may be necessary to have a two-week lockdown to be “completely confident”.

“It is too early to make that announcement. Today is the second day of seven days,” he said on Saturday.

He said an online booking portal for vaccine appointments was still weeks away, despite the Health Department testing its online booking system on Saturday.

Amid debate about the rollout, the co-chair of Australia’s vaccine expert group Allen Cheng confirmed on Saturday that the Australian Technical Advisory Group on Immunisation was considering whether to double the number of Australians receiving the Pfizer vaccine.

“A single dose of both Pfizer and AstraZeneca still gives moderate protection – not as good of course as two doses – but still reasonable protection,” explained University of Queensland infectious diseases physician Associate Professor Paul Griffin. “Depending on the study it’s at least 60 per cent.”

Professor Griffin said this compared to about 80 or 90 per cent after the second dose, which both offer almost complete protection from serious disease and death.

Professor Cheng said delaying the second shot of Pfizer meant a trade-off between having more people partially protected or fewer people fully protected, though he said it could be complicated.

“It’s under discussion,” he said. “My general feeling is that it would probably be a bit confusing because we would have to cancel everyone’s second doses. I don’t think that in the situation we are in at the moment that there’s a lot of bang for that buck.”

The Pfizer vaccine is the preferred vaccine for all adult Australians aged under 50, due to a higher risk of a rare clotting disorder in younger people following an AstraZeneca vaccine, but supplies are constrained with about 350,000 doses currently arriving each week.

Police and protesters clashed in Melbourne on Saturday, as about 150 people rallied against lockdown and coronavirus vaccinations. Fourteen people were arrested, two officers and a protester were injured and 55 were issued with penalty notices for breaching CHO directions.

Meanwhile, federal government sources said a deal with the Victorian state government to establish new quarantine system was imminent and would likely be announced in the next two weeks.

Mr Hunt said on Friday the “general concept that Victoria is proposing is strong” and it’s understood the Avalon airport proposal is more likely to be approved than an alternative site in Mickleham.

Senior Victorian Liberal and cabinet minister Dan Tehan said the federal government was “working closely with the Victorian government and examining the details of their proposal and think it has real merit”.

Stay across the news you need to know related to the pandemic. Sent Monday and Thursday. Sign up here.