Cannabis addict who stabbed five people did it to stop voices in his head, court hears as attempted murder charges against him are dropped

A deranged knifeman who stabbed five people in a four-day rampage told doctors he was smoking cannabis every day to help him manage voices in his head, a court heard.

Jason Kakaire, 30, knifed four men and a woman in a horrific spree of violence in Edmonton, north London.

Kakaire, who had a history of carrying blades, later told a psychiatrist at maximum security Broadmoor Hospital that he had been hearing voices ‘that were going to kill him’. 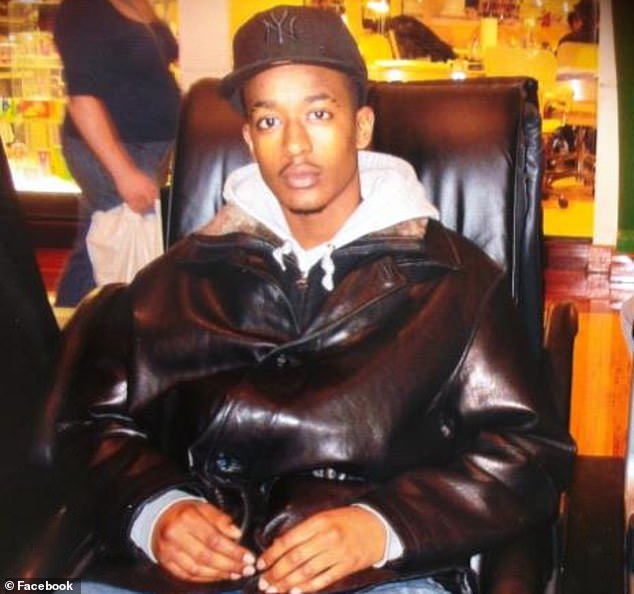 Deranged knifeman Jason Kakaire, 30, who stabbed five people in a four-day rampage told doctors he was smoking cannabis every day to help him manage voices in his head, a court heard

Ayfer Bektas was the first to be attacked at 6.45pm on 30 March last year.

She had gone out for evening stroll when she was wrestled to the ground from behind and knifed to the left of her back severing her spinal cord.

Kakaire ran off down the street leaving her to her fate as a shocked witness phoned the emergency services.

Rossano Scamardella, QC, prosecuting, said: ‘This was witnessed by Shevki Emin who was also on Aberdeen Road. He saw a hooded male walk three or four metres past Ayfer Bektas, before turning around and sprinting towards her.

‘He then pushed Ayfer Bektas to the ground using both hands before striking her on the back four or five times causing her to cry out in pain. 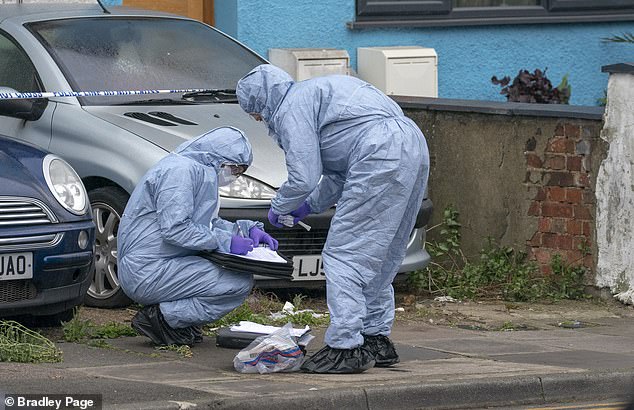 Kakaire knifed four men and a woman in a horrific spree of violence in Edmonton, north London. Pictured: Police at the scene of the fifth stabbing, in Aberdeen Road, Edmonton, in April last year

‘The hooded male then ran off in the direction he had just come from. There was blood coming from the left side of her back and she could no longer feel her legs.

‘Around ten minutes later police arrived and began to cut Ayfer Bektas’ jacket away from her body. As they did so, it was clear that there was a knife blade protruding two or three inches from her back.

‘The handle had snapped off during the attack, but the blade remained inside her.’

Judge Anne Molyneux heard Ms Bektas was suffering from breast cancer at the time of the attack and remains paralysed with her life expectancy shortened.

Ms Bektas said in a victim statement read to the court: ‘The knife attack has left me paralysed and the inability to walk. I will never walk again. I find myself screaming aloud in public.

‘I was not in employment at the time but that was only because I was battling breast cancer. I battle pain and depression every day.’

His final victim was Suleyman Karayapi, who was stabbed on 2 April back on Aberdeen Road.

7.02pm: A woman, aged 45, is left in a  ‘critical condition’ after she is knifed in the back in Aberdeen Road, Edmonton.

00.15am: A man aged 52 is stabbed in Park Avenue and rushed to hospital with non-life threatening wounds.

3.55am: A 23-year-old man is stabbed in Silver Street, Edmonton, before being found at Seven Sisters Tube station.

9.43am: A man aged 29 is knifed in the back in  Brettenham Road in another ‘bloodbath attack’.

5.05pm: A man, in his 30s, is found with knife injuries in Aberdeen Road, Edmonton after being stabbed in Fairfield Road.

Mr Langley left the Gilpin Bell pub at 11pm on 31 March and was chased along Park Avenue by Kakaire, wearing a distinctive blue coat, the court heard.

He felt a blow to the left side of his lower back and turn to see his attacker flee.

Doctors found he had been stabbed and was suffering from a 2.2 inches-deep injury.

Just hours later at 2.45am Kakaire left his flat again and 20 minutes later Mr Hayle got off the 149 bus and bought some cigarettes form a BP garage and headed down Fore Street.

As he made his way down the road, he was stabbed in the kidney – the wound was 4.7 inches deep.

He managed to stagger to Seven Sisters Tube Station and get assistance from staff.

Kakaire changed his clothes after the attack and put on a white hooded top with the number 32 on the back, the court heard.

Six hours later Mr Uddin was on the way to work as he also headed along Fore Street. Outside John Grant Estate Agents he too was knifed in the back.

After the attack he told officers he had felt ‘dagger eyes’ following him through the busy streets.

He suffered a cut to his lung after the blade penetrated 3.5 inches deep. 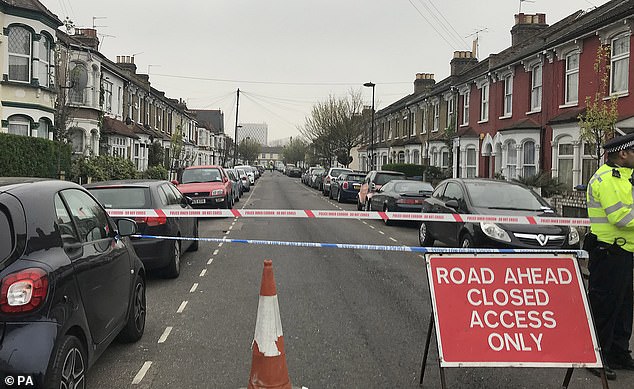 Kakaire, who had a history of carrying blades, later told a psychiatrist at maximum security Broadmoor Hospital that he had been hearing voices ‘that were going to kill him’. Pictured: The scene in Fairfield Road, Edmonton, after the fifth attack

Police officers later found Mr Uddin’s blood on Kakaire’s jeans and also on his pair of ‘no fear’ trainers.

Mr Uddin’s statement read: ‘I have nightmares and suffer from stress. I always think about this incident. I am still out of work and cannot lift heavy objects.’

Mr Karayapi also suffered a punctured lung after he was stabbed in an unprovoked attack on 2 April.

He had left his home, near where Ms Bektas was attacked, on the way to pick medication up for his son.

Due to the police cordon Kakaire took a diversion and headed through Craig Park, the court heard.

A blow landed on his back and went 5.1 inches deep leaving him with a collapsed lung.

Mr Karayapi said in his victim impact statement: ‘This incident has effected my social life very much as I used to take my children to the park, I am now afraid, and I still cannot go out in the evening.

‘I was unable to bath myself and although my wife was heavily pregnant at the time, she helped me. I keep reliving the incident in my mind.

‘I feared I would not see my children grow up.’

Mr Scamardella said the knifeman later reported ‘ongoing auditory and visual hallucinations including hearing voices telling him to kill himself.

‘He told the doctor he used cannabis on a daily basis which helped him to manage the voices but recognised to this doctor this may in fact have been the course of some of the offences.

‘He stated in the days leading up to the attack the voices got worse, but he was unsure why that was the case.

‘He said the voices were starting to say they were going to kill him, and he started to think he needed to go out and kill.

‘He said he regretted his actions and was sorry for what he had done.’

In 2008 at Haringey Magistrates’ Court put on a community order with an unpaid work requirement for possessing a blade on October 6 that year.

Two years later at Camberwell Magistrates’ Court he was convicted of possessing another kitchen knife with a 7.9-inch blade and sent to a Young Offenders Institute for five months.

Kakaire, of Cameron Close, Edmonton, has admitted five charges of wounding with intent to cause grievous bodily harm and five of having a bladed article.

He denied five counts of attempted murder and those charge were ordered to lie on file.

Kakaire is set to be sentenced on 29 May after reports are prepared.