The mother of a 13-year-old in Chicago said she “can’t praise” the two police officers who rushed her son to the hospital enough after he was wounded in a drive-by shooting this week.

“I’m highly grateful for you guys. Thank you that was a wonderful job,” Swaysee Rankin’s mother, Ashley Jackson told reporters in a news conference.

Jackson said the fact that the officers took Rankin to the hospital in their patrol car instead of waiting for an ambulance “saved his life,” adding she plans to get their names and badge numbers so she can thank them properly.

Officers Rhonda Ward and Julius Givens, who were patrolling the Southside neighborhood Monday evening, saw Rankin and realized his wounds were too severe to wait for an ambulance so they carried the boy to their patrol car, WLS-TV in Chicago reported. 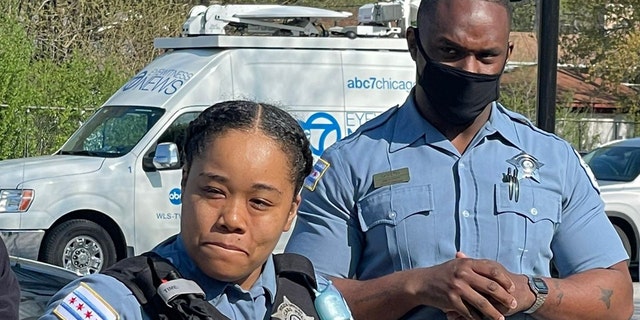 Officers Rhonda Ward (left) and Julius Givens (right) explained in a news conference how they rushed Swaysee Rankin, 13, to the hospital after he was shot Monday night.
(Chicago Police)

Rankin was shot in the back and stomach.

Rankin’s mother said doctors told them he wouldn’t have any long-term injuries and the family is “praying for a speedy recovery” as he continues to undergo surgery.

“This violence has definitely got to stop immediately,” she said, adding that Rankin’s 14-year-old cousin was also shot but is also expected to recover. “These kids do not deserve it. These are babies laying in these hospital beds.”

She called her son and his cousin “super strong.”

Officer Ward said she was glad Rankin trusted them to get him to the hospital. “It was just heartwarming for me that I could actually save a life because that’s what I got on this job to do,” she said, according to WLS.