Chinese authorities have claimed that they detected the coronavirus on frozen chicken wings imported from Brazil.

A sample of the food product shipped into the southern Chinese city of Shenzhen tested positive for COVID-19, the city government said on Thursday.

Fears have arisen that contaminated food shipments could cause new outbreaks in the country as officials have warned the public about the infection risks from imported meat and seafood. 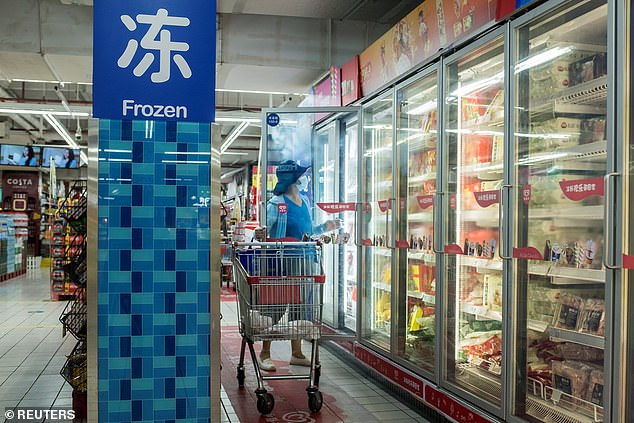 Chinese authorities have claimed that they detected the coronavirus on frozen chicken wings imported from Brazil. The file picture shows a woman looking at frozen products in Beijing 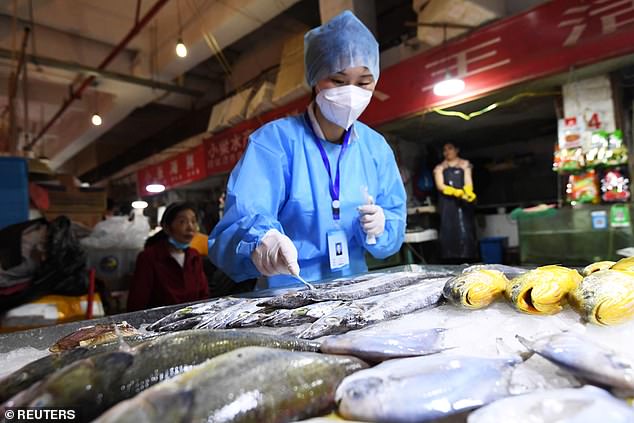 In this file photo, a  worker of Nanming district’s Center for Disease Control and Prevention collects a swab from frozen fish at Wandong market in Guiyang, Guizhou province on July 1

The discovery came a day after traces of the coronavirus that causes COVID-19 were found on the packaging of frozen shrimp from Ecuador. China has been stepping up screenings at ports amid the concerns over food imports.

The authorities also said that they have also found the pathogen on the packaging of imported frozen seafood that arrived in another Chinese port city earlier this week.

Shenzhen’s disease control centres tested a surface sample taken from the chicken wings as part of routine screenings carried out on meat and seafood imports since June, when a new outbreak in Beijing was linked to the city’s Xinfadi wholesale food centre.

The local health authorities traced and tested everyone who might have come into contact with potentially contaminated food products, and all results were negative, the city’s notice said.

The Shenzhen Epidemic Prevention and Control Headquarters said the public needed to take precautions to reduce infection risks from imported meat and seafood.

In addition to screening all meat and seafood containers coming into major ports in recent months, China has suspended some meat imports from various origins, including Brazil, since mid-June.

The first cluster of COVID-19 cases was linked to the Huanan seafood market in the city of Wuhan. Initial studies suggested the virus originated in animal products on sale at the market.

Li Fengqin, who heads a microbiology lab at the China National Center for Food Safety Risk Assessment told reporters in June the possibility of contaminated frozen food causing new infections could not be ruled out.

Authorities in China have found the novel coronavirus on the packaging of imported frozen seafood that arrived from the port city of Dalian, a local government said on Tuesday.

The virus was found on the outer packaging of frozen seafood bought by three companies in Yantai, another port city in eastern Shandong province.

The Yantai city government said in a statement the seafood was from an imported shipment that landed at Dalian, which recently battled a surge of cases, but did not say where it originated.

In July, customs officers in Dalian, a major port in the northeastern province of Liaoning, found the coronavirus in the packaging of frozen shrimps imported from Ecuador, and China then suspended imports from three Ecuadorean shrimp producers. 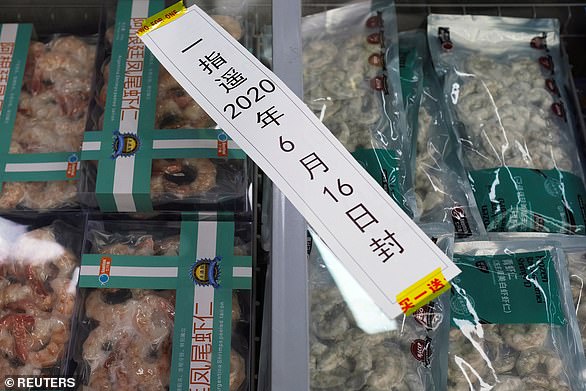 Authorities said they found the coronavirus on the packaging of imported frozen seafood that arrived from the port city of Dalian, a local government said on Tuesday. The picture taken on June 16 shows frozen seafood products at a supermarket in Beijing

The novel coronavirus is believed to have emerged in a market that sold seafood and wildlife in the central Chinese city of Wuhan late last year.

It has since spread around the world, with some new cases brought back into China from returning travellers.

Some of the seafood that the three Yantai companies bought had been processed for export, while the rest had been kept in cold storage and has not entered the market, the Yantai government said.

When asked if any of the processed seafood had been exported, a member of staff at a coronavirus outbreak response unit in Yantai declined to elaborate, referring Reuters to the Yantai city government statement.

Authorities had sealed off the goods, the city government said. Everyone who handled the goods was under quarantine and have tested negative for the coronavirus, it said.

Related posts:
August 13, 2020 World News Comments Off on China claims to have found coronavirus on frozen chicken from Brazil
Celebrity News:
New Couple Alert? Harry Styles and Tracee Ellis Ross Reportedly Spotted on a Date in L.A.
Sophie Turner Shares Throwback Pics From Pregnancy
BTS Announce New Studio Album ‘BE’
Gigi Hadid may have given birth on a farm in Pennsylvania, according to a report
Tana Mongeau & Noah Cyrus Hold Hands While Getting Dinner in West Hollywood
Recent Posts
This website uses cookies to improve your user experience and to provide you with advertisements that are relevant to your interests. By continuing to browse the site you are agreeing to our use of cookies.Ok