China's Foreign Ministry has accused Australia of being infected by paranoia, as concerns mount over the fate of Australian TV anchor Cheng Lei and the timing of another trade strike on Australian barley.

China has been shifting its barley imports to Argentina, Russia and France, new trade data shows, as the grain weathers its second trade hit this year and Australian exports are struck with their sixth infringement in six months. China on Tuesday night suspended barley imports from Australia's largest grain exporter, CBH, after it claimed pests were found on multiple occasions. CBH has denied the claims. 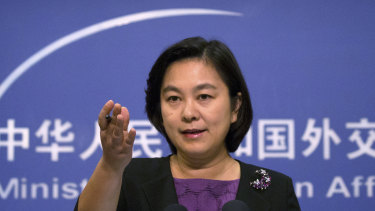 The daily escalation between the trading partners has seen Australia announce a new inquiry into Chinese interference at Australian universities, block takeover bids of Australian companies and Chinese telco giant Huawei withdraw from sponsoring the NRL in the past week. In China, authorities have hit wine and barley with further trade strikes and detained Australian journalist Cheng on unknown charges.

China's Foreign Ministry spokeswoman Hua Chunying said Australia had been "infected with fear, conjecture and paranoia" and defended Beijing against claims of foreign interference. "We hope Australia will adopt a constructive China policy instead of a destructive one," she said.

Australian officials are still to be notified of the claims against Cheng, a high-profile business anchor on Chinese state media network CGTN who was privately critical of the Chinese Communist Party on Facebook. She is being held in an undisclosed location, without guaranteed access to legal aid. Cheng can be held there for six months without charge under China's opaque judicial system.

"China is a country of rule of law," Hua said on Tuesday night. "I don’t have any specific information [about Cheng]." No update had been provided to Australian officials as of Wednesday afternoon.

Despite a largely bipartisan approach to foreign policy on China, some MPs in Canberra are growing increasingly concerned about the long-term economic effects of the deteriorating relationship.

Labor MP Joel Fitzgibbon said he was anxious about thermal coal industry in the Hunter Valley. "If the Chinese turned it off. It would be a real economic problem for us in my region," he said on Wednesday. "There is no dialogue. There is no discussion. There is no negotiation. This thing will get worse before it gets better."

Australia exports $7 billion in thermal coal to China each year. Exports over the first half of 2020 were actually 40 per cent higher compared to the same period last year. But the electricity-producing resource is vulnerable to local economic shifts as China ramps up its own domestic production and attempts to manage environmental risks.

"Our process as a government and as ministers is to take each claim and deal with it," he told Perth's 6PR radio. "It's obviously not lost on people that all of these sit inside a wider context and a relationship which has its complications."

Australia remains China's largest for the grain which is used in animal fodder and beer production, accounting for more than 10.7 million tonnes a year. But China has been diversifying its imports away from Australia for at least the past 12 months.

Argentina has started ramping up its exports to China, with figures showing more than 160,000 tonnes imported into China since July.

Russia's burgeoning barley industry was approved in 2019 to export to China. France shipped a record 700,000 tonnes in the first half of this year.