Claudette regained tropical storm status Monday morning as it neared the coast of the Carolinas less than two days after 13 people died — including eight children in a multi-vehicle crash — due to the effects of the storm in Alabama.

The children who died Saturday were in a van for a youth home for abused or neglected children. The vehicle erupted in flames in the wreck along a wet Interstate 65 about 35 miles south of Montgomery. Butler County Coroner Wayne Garlock said vehicles likely hydroplaned.

The crash also claimed the lives of two other people who were in a separate vehicle. Garlock identified them as 29-year-old Cody Fox and his 9-month-old daughter, Ariana; both of Marion County, Tennessee. 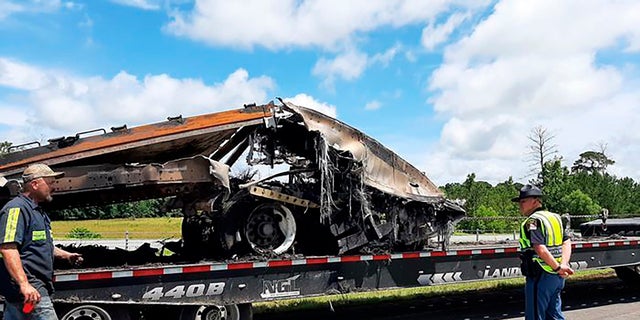 Some of the wreckage from a fatal multiple-vehicle crash is loaded to be carried away Sunday in Butler County, Ala. (Lawrence Specker/Press-Register/AL.com via AP)

Additionally, a 24-year-old man and a 3-year-old boy were also killed Saturday when a tree fell on their house just outside the Tuscaloosa city limits, said Capt. Jack Kennedy of the Tuscaloosa Violent Crimes Unit. Makayla Ross, a 23-year-old Fort Payne woman, died Saturday after her car ran off the road into a swollen creek, DeKalb County Deputy Coroner Chris Thacker told WHNT-TV.

A search was also underway for one man believed to have fallen into the water during flash flooding in Birmingham, WBRC-TV reported. Crews were using boats to search Pebble Creek.

Monday morning, Claudette had maximum sustained winds of 40 mph, the National Hurricane Center said in an advisory. The storm was located 30 miles  south of Norfolk, Virginia, and moving east-northeast at 28 mph, forecasters said.

The storm was expected to move into the Atlantic Ocean later in the morning, then travel near or south of Nova Scotia on Tuesday. 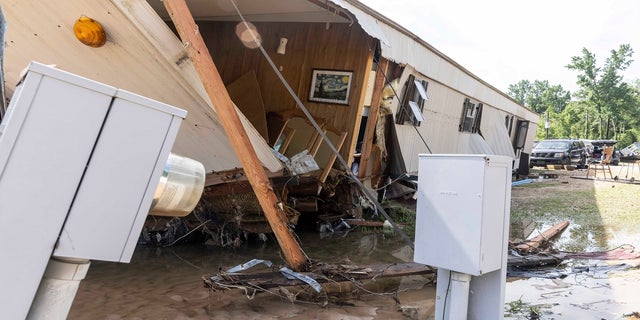 A home owned by Larry and Sally Higgins was destroyed by heavy flooding Saturday night in Northport, Ala. (AP)

A tropical storm warning was in effect from Cape Fear, North Carolina, to the town of Duck on the Outer Banks.

“An isolated tornado is possible early this morning over parts of the Outer Banks,” said Brad Reinhart, a specialist with the National Hurricane Center. “By afternoon, we expect the system to be well offshore.”

About 1 to 2 inches of rain was expected for the Carolinas before Claudette moved out to sea, with isolated flash flooding possible.

The van in Saturday’s crash was carrying children ages 4 to 17 who belonged to the Tallapoosa County Girls Ranch, a youth home operated by the Alabama Sheriffs Association.

Michael Smith, the youth ranch’s CEO, said the van was heading back to the ranch near Camp Hill, northeast of Montgomery, after a week at the beach in Gulf Shores. Candice Gulley, the ranch director, was the van’s only survivor — pulled from the flames by a bystander. 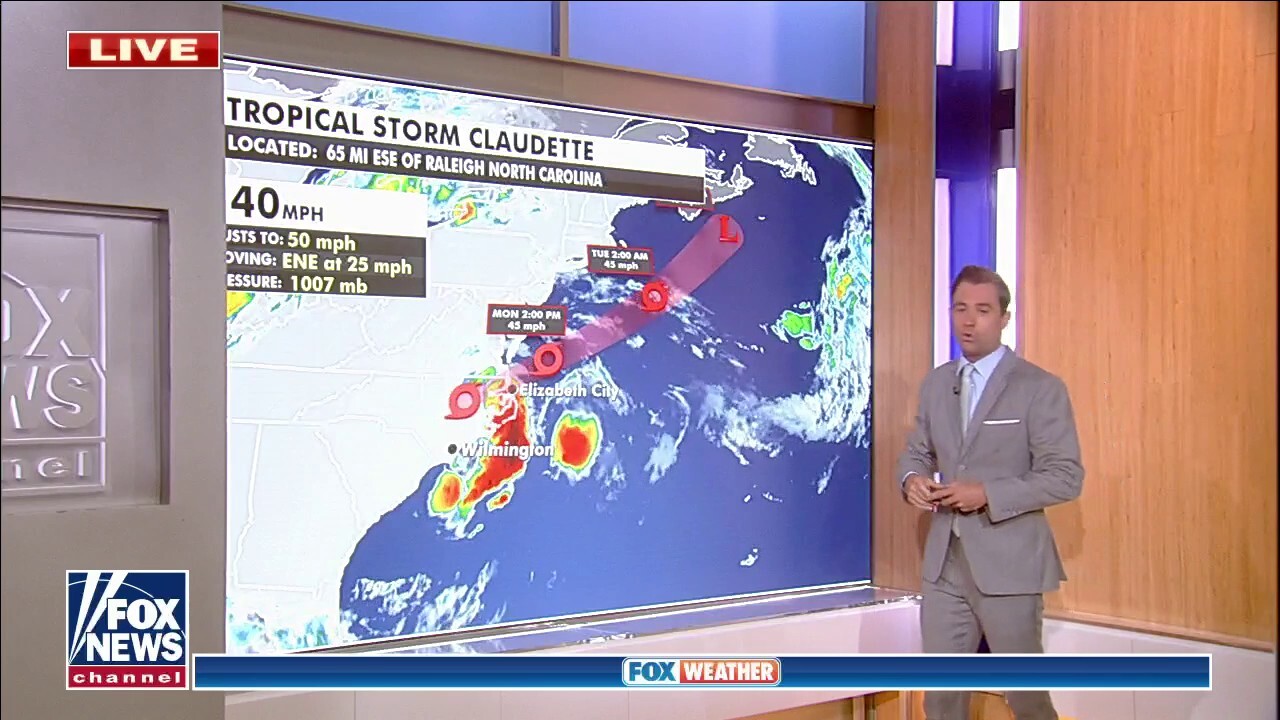 Adam Klotz has your FoxCast.

“Words cannot explain what I saw,” Smith said of the accident site, which he visited Saturday. He had returned from Gulf Shores in a separate van and did not see the crash when it happened.

Gulley remained hospitalized Sunday in Montgomery in serious but stable condition. Two of the dead in the van were Gulley’s children, ages 4 and 16. Four others were ranch residents and two were guests, Smith said.

Garlock, the coroner, said the location of the wreck is “notorious” for hydroplaning, as the northbound highway curves down a hill to a small creek. Traffic on that stretch of I-65 is usually filled with vacationers driving to and from Gulf of Mexico beaches on summer weekends.

The National Transportation Safety Board tweeted that it was sending 10 investigators to the area Sunday to investigate the crash.