As Victoria slowly but steadily brings its second wave of COVID-19 under control, the focus is sure to shift from one of crisis to recovery. It's a long road back.

Led by chief reporter Chip Le Grand, The Age talked this week to some of Melbourne's most prominent and influential leaders across a range of industries for guidance and inspiration in getting the state back on its feet. While they highlighted how some sectors had already risen to the challenge, there was recognition of the enormous challenges ahead. 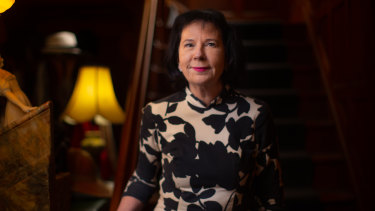 NGV president Janet Whiting says the best thing for Melbourne right now would be for COVID-19 hostilities to cease.Credit:Simon Schluter

One essential ingredient that will be in abundance is money. As former long-serving ACTU secretary Bill Kelty pointed out, the superannuation industry is ready to invest trillions of dollars in infrastructure and the governor of the Reserve Bank has given state governments the green light to spend its way back to growth. After decades of concern over debt levels, Mr Kelty described it as a "magic opportunity" to build consensus for an ambitious reform agenda.

Premier Daniel Andrews is already talking up delivering the biggest "repair and rebuild" program the state has ever seen. But it needs to be done right. Big spending projects that are wasteful or poorly targeted may offer a short-term fix, but could leave an enormous debt legacy for future generations.

To avoid this, Rod Eddington, a big-thinking former business leader whose ideas have reshaped contemporary Melbourne, believes people and organisations with competing interests need to agree to work together. "We built a reputation as the world’s most liveable city and the events and sporting capital of the world," Sir Rod said. "It worked because the government, businesses, officials, we all worked together."

That consensus approach is shared by Janet Whiting, president of the National Gallery of Victoria’s council of trustees and chair of Visit Victoria. She raised concerns about the rising levels of hostility over the lockdowns, and believes if Melbourne fragments under the pressure it will only make it harder to find a way out. It's a concern The Age shares.

The task of retaining Melbourne's status as one of the world's most liveable cities will require a collective and collaborative effort like never before. So many of Melbourne's most coveted assets – its vibrant arts and food scene, its ethnic diversity, its sporting prowess, its highly regarded educational institutions – have been financially battered by the lockdowns.

Those treasured assets will not come back to life by just making the state's "big build" even bigger. While infrastructure projects will be important, the need to support the individuals and institutions that burnish Melbourne's reputation will be essential.

Not to be forgotten are those hardest hit by the pandemic. Workers in low-paid and insecure jobs, often from disadvantaged communities, will need help getting back to work. And a recent report on the impact of the pandemic on women found that while emergency economic policies initially helped them stay afloat, decisions since then, such as the ending of free childcare, had disproportionately affected women. Such groups should figure highly in any program of repair and rebuild.

Reviving Melbourne, and Victoria as a whole, will require an enormous effort that prioritises vision, compassion, financial rigour and a willingness to bring the best ideas to life. This week, The Age's series showed that we have the people who are up to the challenge. It is now in Mr Andrews' hands to ensure that he supports such efforts. All Victorians would be better for it.

Note from the Editor

The Age’s acting editor Michelle Griffin writes a weekly newsletter exclusively for subscribers. To have it delivered to your inbox, please sign up here.