CORONAVIRUS could shut down entire cities to stop it spreading, the Health Secretary warned today. 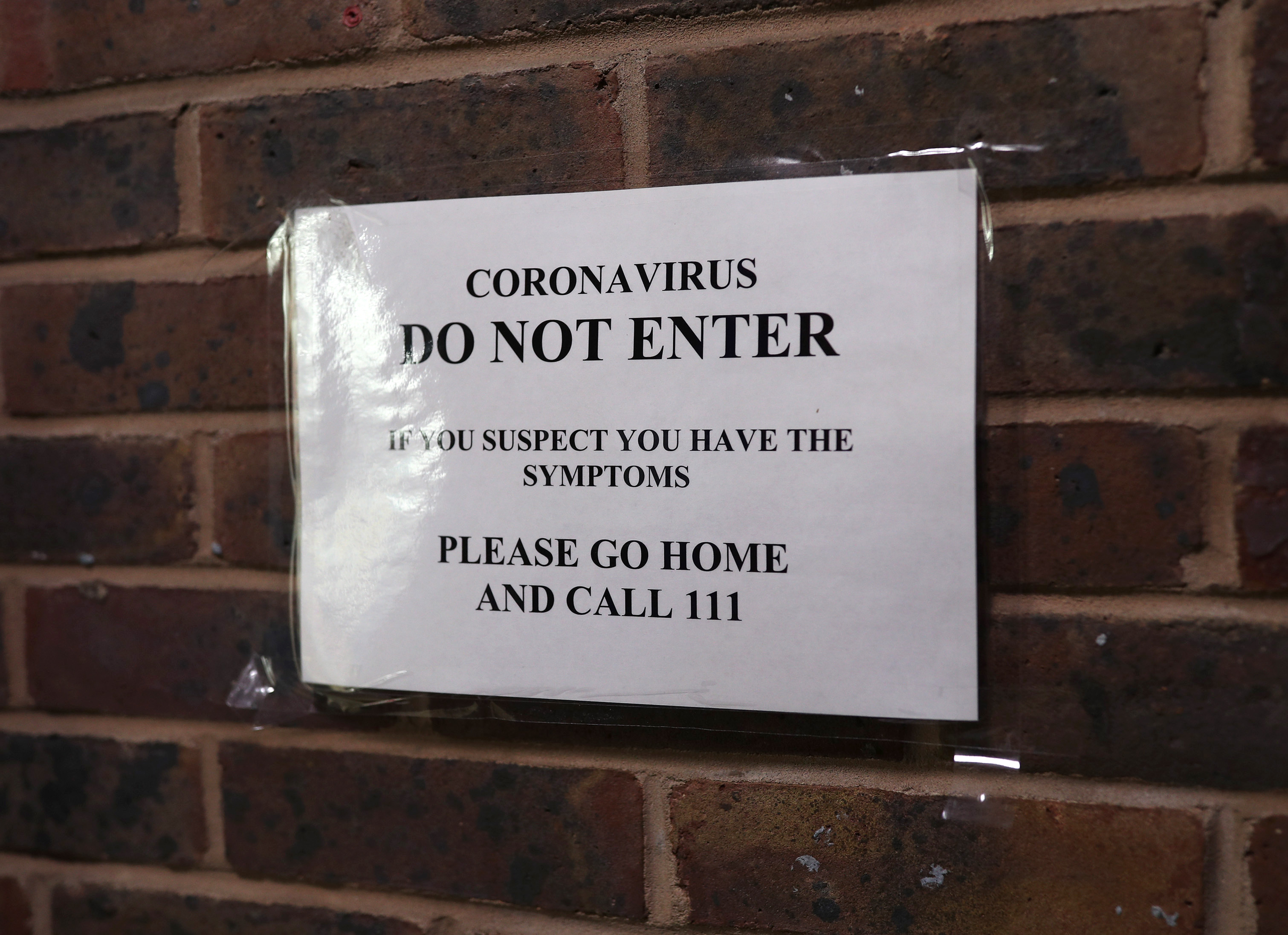 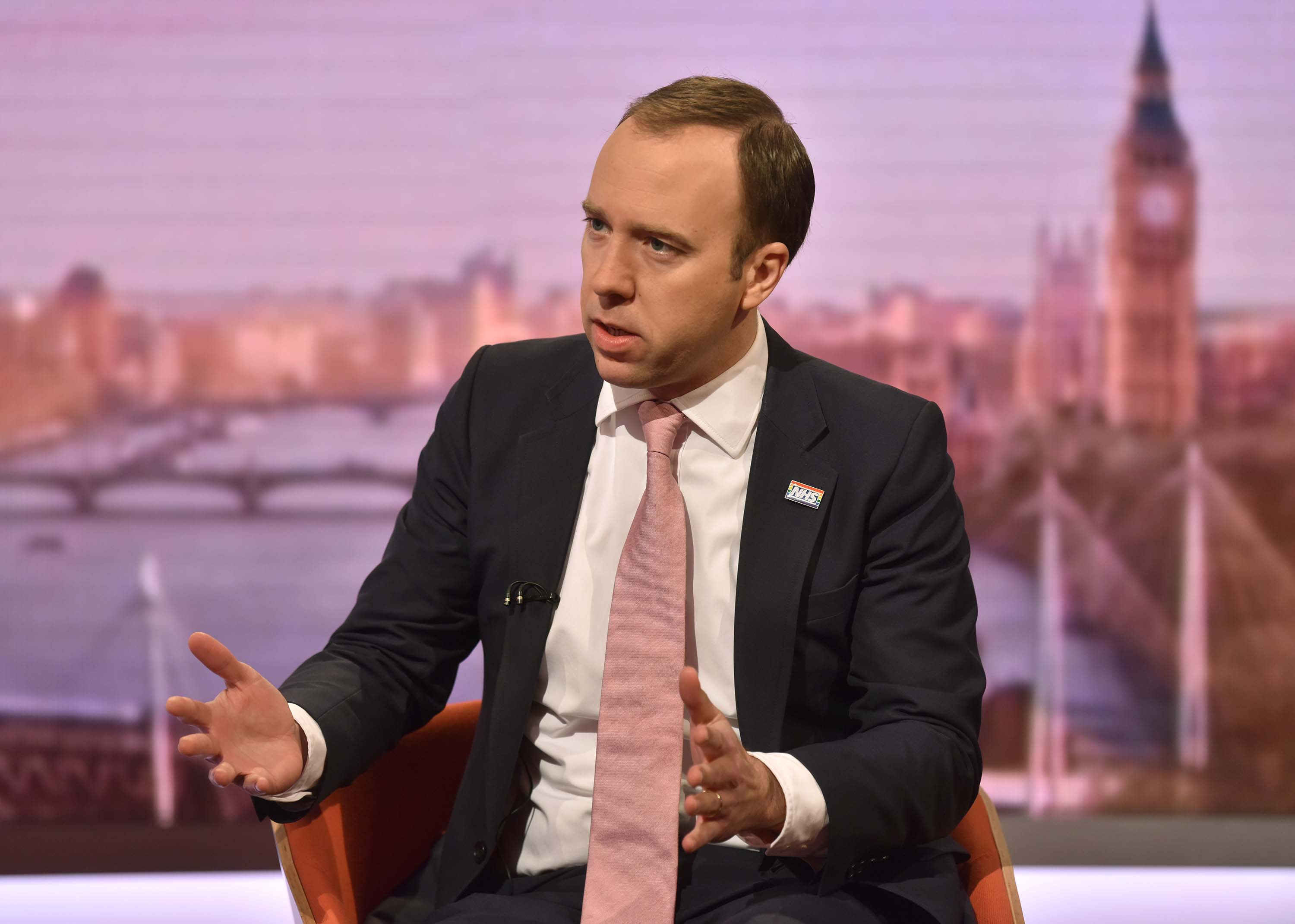 It comes as doctors battle a "nightmare scenario" after a man became the first to catch Coronavirus within Britain.

Another 12 cases of Covid-19 were confirmed this afternoon – taking the total to 35.

In France the Government has banned gatherings of more than 5,000 people to try and stop the spread of the killer virus.

Mr Hancock today refused to rule out cutting off entire cities like Wuhan in China where the bug originated.

Andrew Marr asked him: "China, of course, isolated entire cities. Is it conceivable under any circumstance, you try and cut off the city in this country?”

Mr Hancock replied:  "There's clearly a huge economic and social downside to that.

"But we don’t take anything off the table at this stage, because you’ve got to make sure that you have all the tools available, if that is what’s necessary.

"But I want to minimise the social and economic disruption."

It may be "too early" to make such calls but the top priority is keeping the public safe, he said.

He admitted that scientists have told him that it's "inevitable" that the crisis will sweep through the world and become "endemic".

And a vaccine is still months away from being developed.

Ministers will this week look at emergency powers they might need if the virus continues to spread – to make sure Britain is fully prepared.

"Under the worst-case scenario, we would have to take quite significant action," Mr Hancock told the BBC.
"We will be publishing battle plans this week that sets those things out."

Health officials are desperate to trace those who were in touch with the man who had walked into a GP surgery in Haslemere,  Surrey.

They have not found anything linking him to someone who had been to an affected region abroad.

A doctor from the practice also has symptoms, ex-Health Secretary and local MP Jeremy Hunt said.

A senior health source said: “This is our nightmare scenario. It’s spreading uncontrollably and we are losing our grip.”

Health Secretary Matt Hancock this morning said the Government already were able to forcibly quarantine members of the population if they were at risk.

And thanks to large-scale No Deal planning in the past six months, the country already has stockpiles of several types of drug that could be used if needed to try and treat the virus.

He also cast into doubt the information coming from other countries such as China and Iran on coronavirus – amid fears they are suppressing the true number of people affected.

"We don't think all the figures from around the world are fully accurate," he said.

"We update [our] figures all the time… but we don't say any of those figures are concrete and definitive." 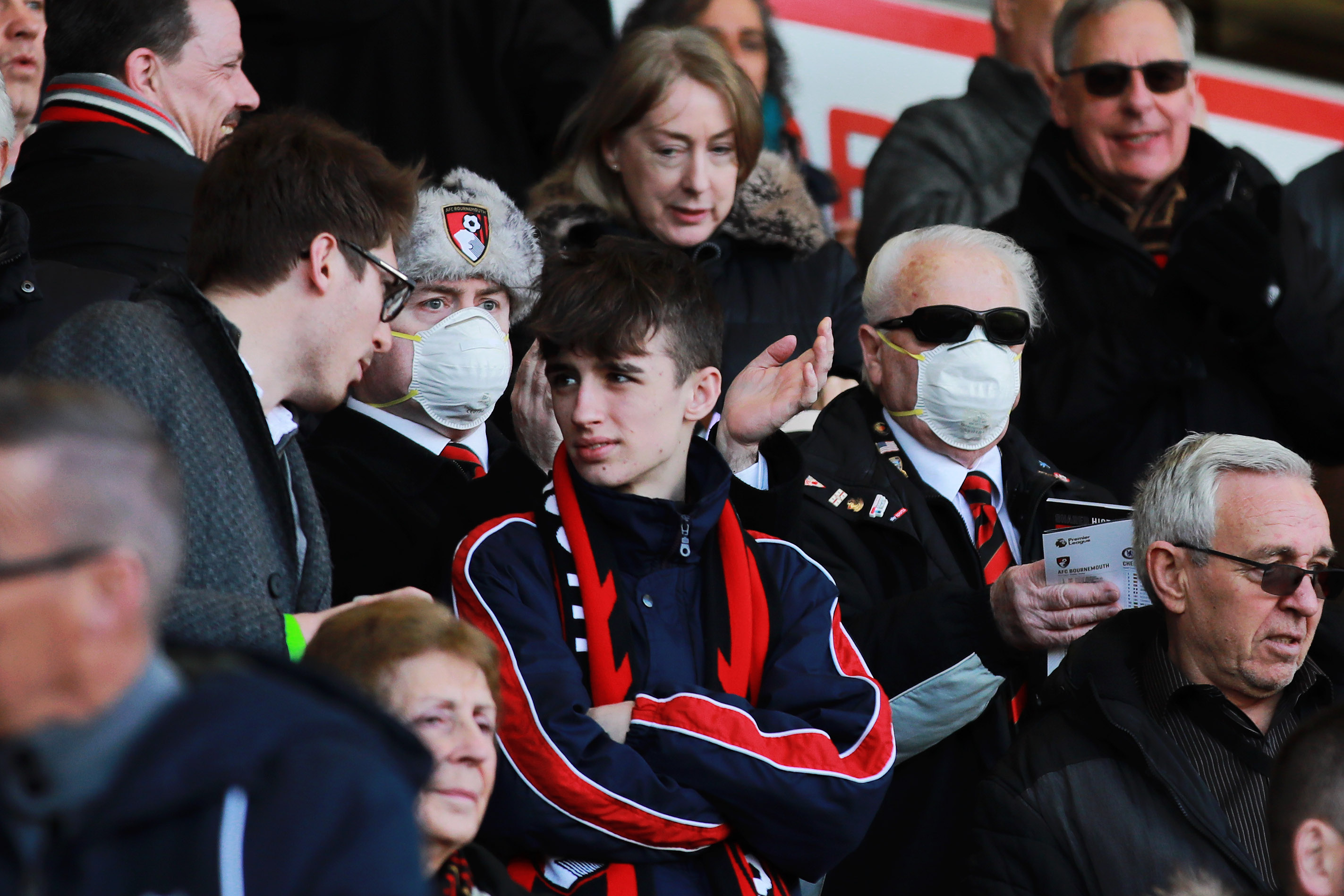 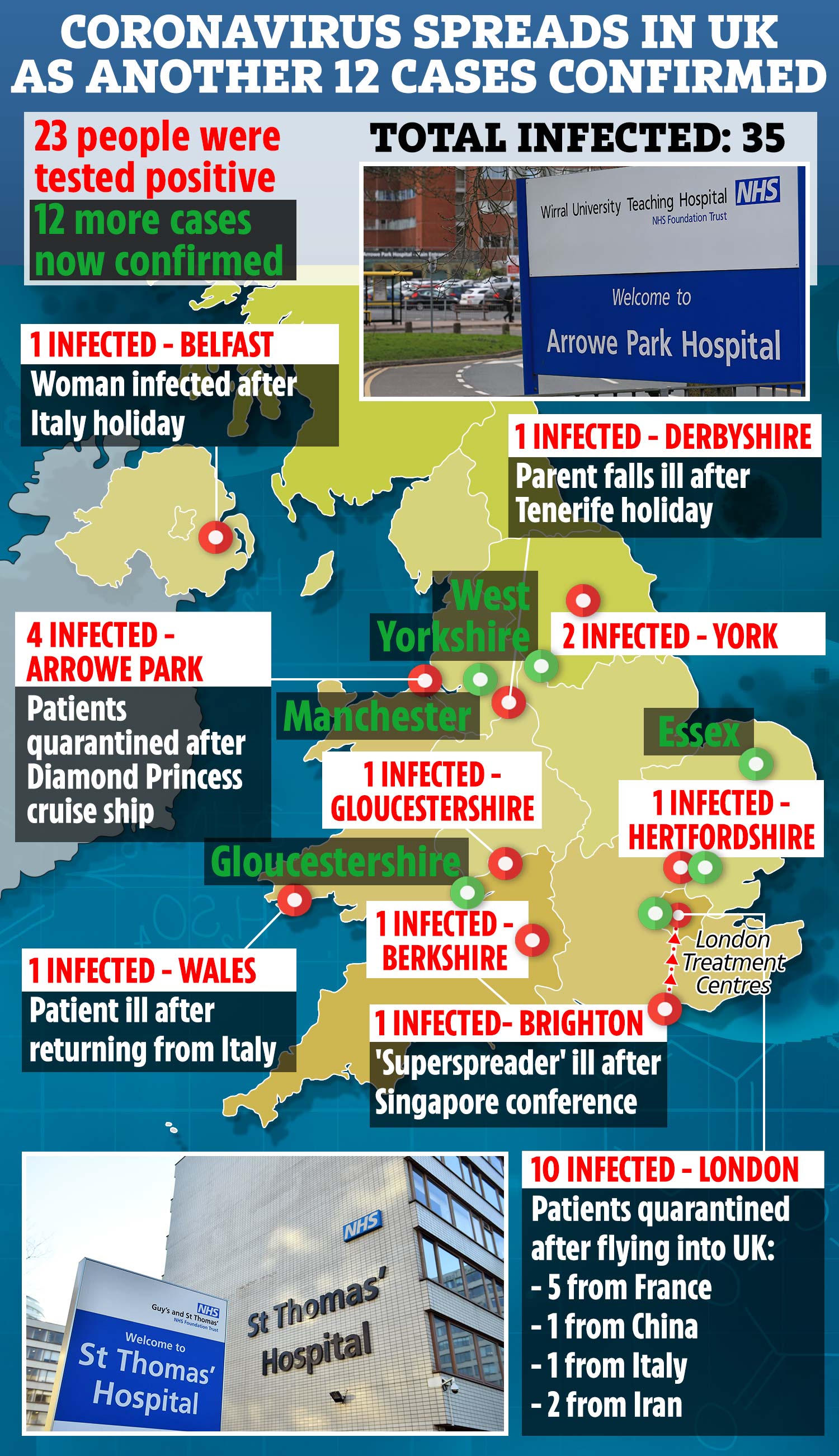 Wash your hands to tune of 'God Save the Queen', public urged

BRITS should wash their hands for as long as it takes to sing 'God Save the Queen', Matt Hancock urged today.

The public are being pushed to make sure they clean their hands as thoroughly as possible to stop the spread of the killer Coronavirus bug.

The Health Secretary said today people should scrub their mitts for at least 20 seconds to destroy as many germs as possible.

He told Radio 5 Live: "You should do that for 20 seconds or more, and the way we explain it to children is that you should sing… wash your hands as long as you’re singing either Happy Birthday or God Save The Queen."

Experts have warned that desperate moves to contain the Covid-19 outbreak could decimate all sport across the UK for months.

Clubs yesterday began taking their own precautions to protect star players from infection.

Tottenham’s injured South Korean ace Son Heung-min, 27, has been forced to self-isolate for two weeks after returning from his home country, where hundreds of cases have erupted.

Last night the outbreak was casting a shadow over horse racing’s historic Cheltenham Festival, which begins in 11 days time.

Organisers insist it is “full steam ahead” for the four-day meeting.

But the odds of racing not taking place on the first day were a mere 2/1 last night.

Cheltenham expects 250,000 spectators to attend the festival and the event in Gloucestershire will not take place without them.

Rugby has already been hit by the postponement of next week’s Six Nations clash between Ireland and virus-plagued Italy.

England's football friendly against Italy at Wembley on Friday March 27 is still officially on — though it is subject to review.

The Chinese Formula One Grand Prix scheduled for April 19 has been postponed, while other races are in doubt. 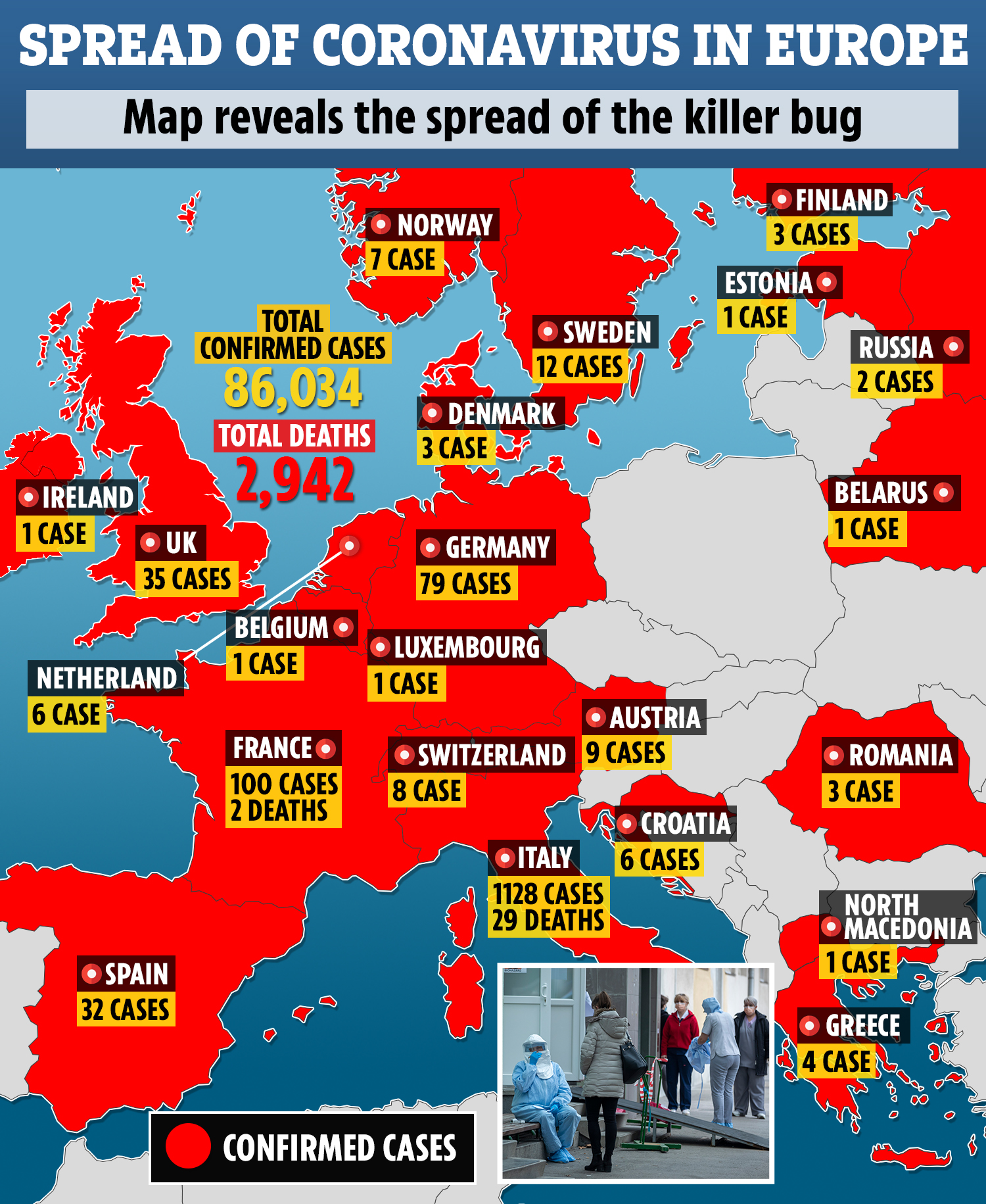