Ministers are considering relaxing time restrictions on supermarket home deliveries to ensure vulnerable people are not left isolated during the coronavirus crisis.

It is understood the measures being examined would allow deliveries to be made at times which are currently viewed as anti-social – late in the evening or very early in the morning.

The move would help to guard against vulnerable people who are self-isolating because of potential exposure to the deadly disease being left without food and vital supplies.

Major supermarket companies are also reportedly set to ask the government to prepare to suspend competition laws in the event the spread of the disease becomes a pandemic so they can work together to meet demand. 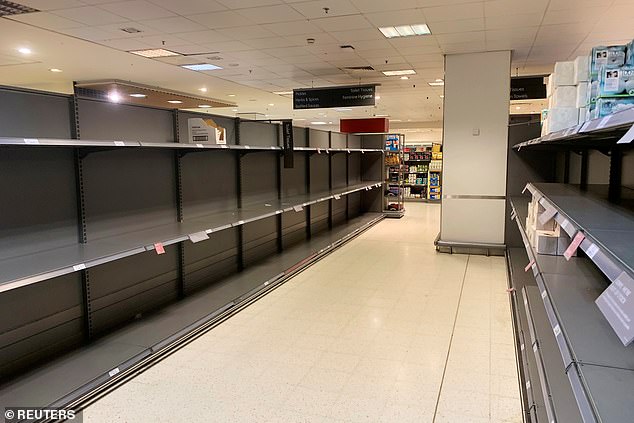 Stockpiling of certain products has left shelves bare in supermarkets in some parts of the UK with some retailers imposing rationing on certain items like pasta. Pictured is a supermarket in Canary Wharf, London, today 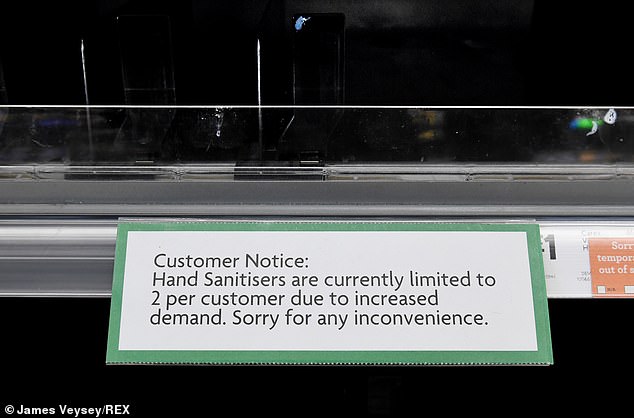 A Morrisons supermarket in Harrow, London, put up a sign warning customers the sale of hand sanitiser was now limited to two per person due to increased demand 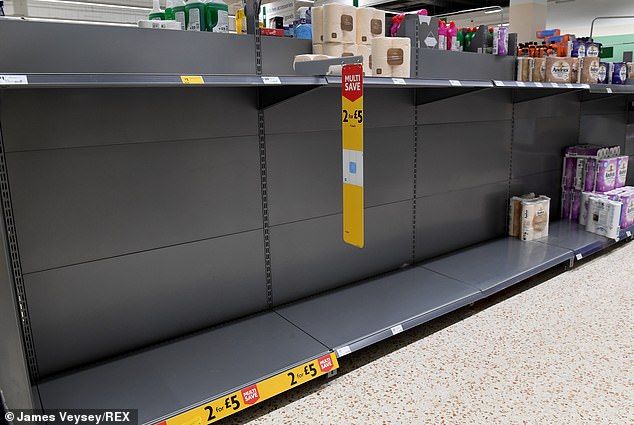 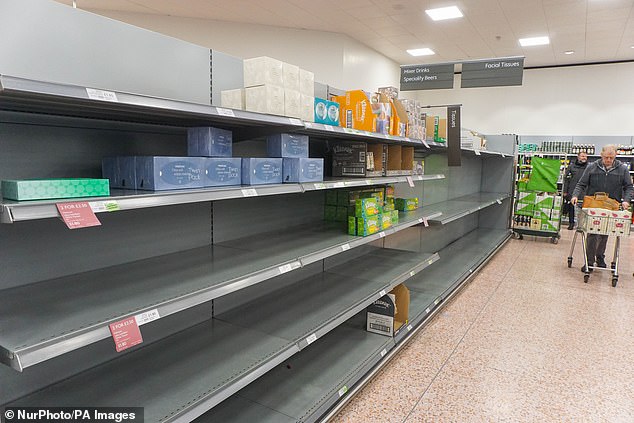 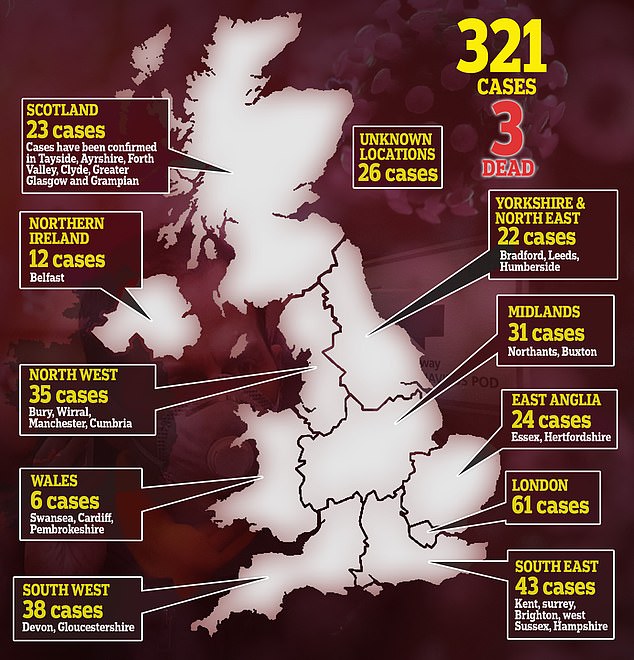 Environment Secretary George Eustice was due to hold a meeting with representatives from the food supply chain this afternoon.

Measures to boost support for the vulnerable were expected to be a key focus of the talks.

There have been numerous reports and photographic evidence of panic-buying across the country despite Boris Johnson having told shoppers there is no need to stock-up on essentials.

It is thought increasing the window in which home deliveries could be made and relaxing restrictions on the maximum number of hours drivers can work would help ease pressure in stores and provide more help for people who are self-isolating.

However, there are concerns about how the government and supermarkets will find and engage with vulnerable customers, like the elderly, who may be most in need but who are also likely to be the least technologically proficient.

A government source said ministers were ‘acutely aware’ of the challenges involved in reaching people who may not use the internet or who have never used home delivery.

They said solutions to those problems were being ‘actively worked on’.

At the moment competition laws effectively prohibit supermarkets from working together.

But Sky News reported that one of the major supermarket companies intended to raise the prospect of suspending the rules during today’s summit with Mr Eustice.

The move would only take place if the spread of coronavirus reached pandemic levels and it would allow competing companies to help fulfill each other’s orders if a store in a certain area was shut down due to the virus.

However, relaxing the rules on delivery hours and maximum driver hours is viewed by the industry as a more pressing concern.

Mr Johnson yesterday said there was no need for people to panic-buy.

The Prime Minister said: ‘We’ve had no advice from the scientific advisers or medical officers that there’s any need for people to buy stuff in.

‘If you think you have symptoms, the best thing to do as you know is to stay at home and contact the NHS.

‘We will make sure we give the NHS… the investment it needs to cope with this crisis.’

The spread of coronavirus in the UK has sparked Christmas-level demand for some items, with consumers facing delays for home delivery as slots have been snapped up.

Widespread stockpiling of goods has prompted some supermarkets to ration certain products. 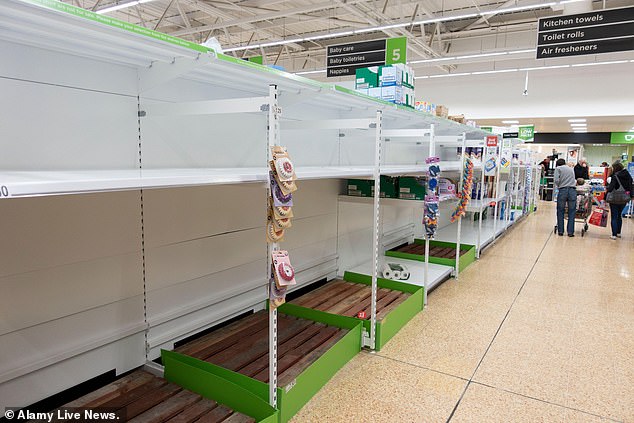 There has also been evidence of panic-buying in Edinburgh, Scotland, where toilet paper and liquid hand soap were in short supply 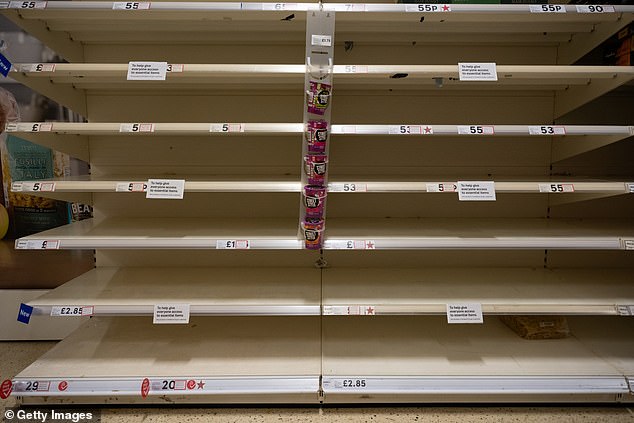 Tesco has put in place measures to restrict the sale of certain items due to stockpiling. Pictured is one of the company’s stores in Cardiff, Wales 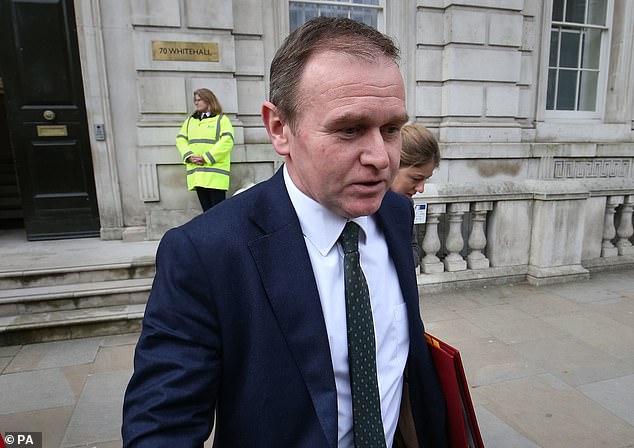 Tesco has limited the sale of goods such as pasta and long-life milk, while a number of major stores are joining them in restricting sales of hygiene products such as hand sanitiser.

Culture Secretary Oliver Dowden said the government is in ‘constant contact’ with major retailers to ensure supplies are available and that shelves are restocked as necessary.

He told BBC Breakfast: ‘There is absolutely no need for anybody to stockpile or anything like that.’

An industry source said the empty shelves seen in many parts of the country were not reflective of any issues in supply chains.

‘The only thing that’s stopping shelves remaining stocked as normal is people buying more than they need,’ the source said. ‘There is absolutely enough for people to get the normal amount.’