The £100,000 allotment war: Couple face eviction from plots they have cultivated for 20 years… despite spending six-figure sum on legal battle to stay put

A couple have spent an astonishing £100,000 fighting to keep the allotments they have cultivated for more than 20 years – but are still due to be thrown off the land tomorrow.

A petty dispute with the ‘dictatorial’ allotment site management meant Elsie Price, 71, and her husband Wayne Armsby, 70, faced eviction from the two plots they rented for £150 a year each.

The allotments are meant for growing vegetables and fruit – though flowers are allowed – but the couple are accused of using theirs as gardens, with, at one time, a sculpture, ponds and a seating area.

They refused to accept losing the land, which is close to the end of their back garden, and took legal action.

Two-and-a-half years later the courts are still involved and the couple have run up a six-figure legal bill which is still rising. 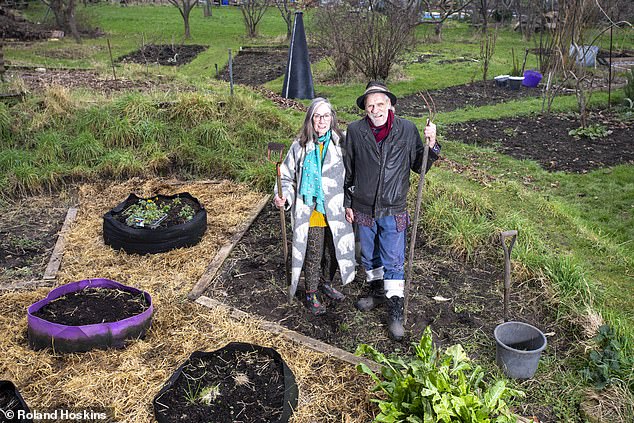 Elsie Price, 71, and her husband Wayne Armsby, 70, have spent £100,000 fighting to keep the allotments they have cultivated for more than 20 years

It has meant using their savings and pension cash, as well as taking money from relatives and friends, to fight for what they say is an important point of principle.

Last month they won a county court case when the judge ruled a decision to evict them on the grounds of anti-social behaviour was unlawful.

However, in a separate move, Pointalls Allotments Ltd in Finchley, north London, gave the couple 12 months’ notice and the eviction date is tomorrow.

A landlord is not legally required to provide a reason when evicting with proper notice.

The couple fear the allotment company will ‘send in the bulldozers’ to flatten everything they have nurtured over the years.

Miss Price has had to continue working as a social worker to help fund their dispute.

She said: ‘If you’d have told me at the start it would cost us £100,000 I wouldn’t imagine where in the world we would get this money from but we have done it.

‘As the costs mounted up, we had considered giving in. This whole process has caused immense pressure, we’ve suffered many sleepless nights, but we’ve had so much support from the community that we’ve kept on going.’

Pointalls has 160 allotments for members to grow fruit and vegetables. They are managed by a board of directors.

But Miss Price and Mr Armsby appear to have upset the powers-that-be by treating land around their allotment patches, at the bottom end of the site, as if it were part of their garden.

There is a communal area with fruit trees, where they sit and relax, along with two ponds. 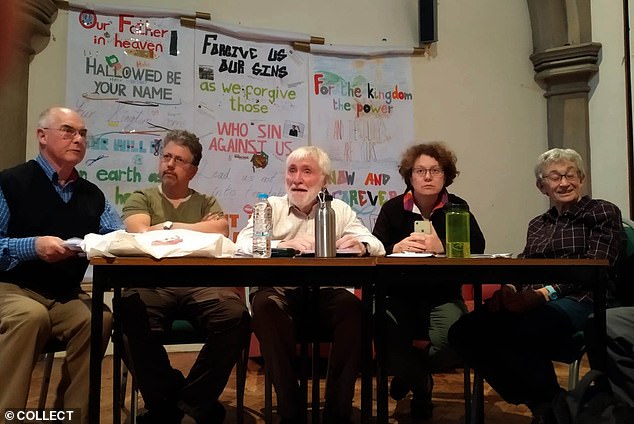 Chairman of Pointalls Allotments Ltd, Paul Hendrick (centre with allotment board members), said the couple ‘had this view that the allotments could be used as gardens rather than for the production of fruit and veg and that is simply not in accordance with allotment legislation’

When they were threatened with eviction at the start of the long-running dispute, Mr Armsby removed a moon-shaped sculpture made from garden waste that he had created.

The couple also worked to improve ‘standards of cultivation’ on their plots. Relations between them and the management broke down in 2017 and two years later they were served eviction notices for anti-social behaviour after a fractious committee meeting.

The couple, who live in a Victorian end-of-terrace house, requested the dispute go to mediation but the allotment company refused.

Judge Mark Raeside QC sided with Miss Price and her husband by overturning the anti-social behaviour eviction order. However, it was a bitter-sweet victory because the allotment company had already given them notice to quit.

Miss Price is determined to fight on. She said: ‘They are a dictatorship.’ She added that she hoped the board would be dissolved and new members elected.

Chairman of Pointalls Allotments Ltd, Paul Hendrick, said: ‘Yes, we’ve had arguments with them and others where plots are not properly cultivated, where we have a procedure to give people notice, encouraging them to cultivate their site properly.

‘Wayne and Elsie had this view that the allotments could be used as gardens rather than for the production of fruit and veg and that is simply not in accordance with allotment legislation.’