Paris: Six men who netted more than $77 million in a brazen and elaborate scheme by impersonating a French defence minister and asking wealthy individuals and institutions to pay for fake, off-the-book government operations have been convicted of fraud by a criminal court in Paris.

Two of the men, Gilbert Chikli, 54, and Anthony Lasarevitsch, 35, whom investigators called the masterminds of the plot, were sentenced to 11 years and seven years in prison and fined €2 million and €1 million respectively ($3.5 million and $1.7 million). 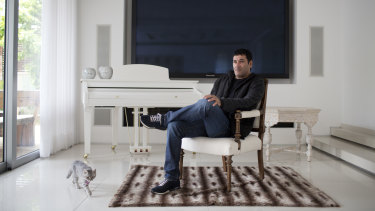 Gilbert Chikli poses for a photo at his home in Ashdod, Israel, in 2016.Credit:AP

Chikli reacted angrily after the verdict on Wednesday, Paris time, calling the trial a "scandal" and accusing prosecutors of having brought the case at the behest of Jean-Yves Le Drian, France's defence minister from 2012 to 2017 and now foreign minister.

"You should be ashamed, prosecutor of the rich," he shouted in the courtroom.

Four other men, ages 27 to 49, who were suspected of varying levels of involvement in the scheme, received sentences of 15 months to five years in prison — with some suspended — as well as fines of between €40,000 and €100,000. The court found a fifth man not guilty.

Prosecutors said at the trial in February that the group impersonated Le Drian, mainly in phone calls. In some cases, they made video calls using a silicone mask and a fake set-up of Le Drian's office. 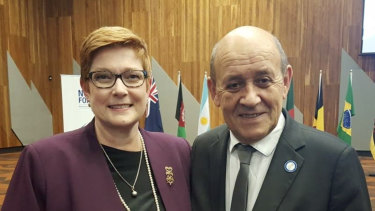 The fake Le Drian, under the pretext of national security, pressed the targets for millions of euros, often saying that France was negotiating a delicate and time-sensitive release of hostages in Syria and could not publicly use taxpayer money to pay the ransom to terrorists.

The impostors urged secrecy and targeted a wide array of people and institutions between 2015 and 2016, including embassies from France and other countries; clergymen; aid groups and charities; foreign governments; the chief executives of large companies; the archbishops of Lyon and Paris; and Nicolas Hulot, a French environmentalist.

The targets were promised that the funds would be paid back — but they were urged to quickly and discreetly wire the money to foreign accounts.

Many of the more than 150 targets saw through the ruse and contacted the Defence Ministry, which alerted investigators in July 2015 that something was wrong. 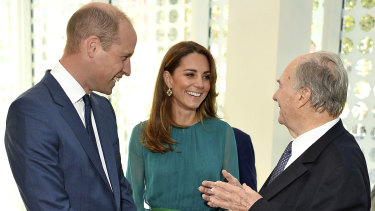 Prince William and Kate, Duchess of Cambridge meet with The Aga Khan during a visit to the Aga Khan Centre, in London last year. The religious leader wired millions to the scammers.Credit:AP

But others sent the money. Three people were hooked, according to court testimony: Karim Aga Khan IV, the spiritual leader of Ismaili Muslims, who wired more than $US20 million in March 2016; Corinne Mentzelopoulos, owner of the prestigious Château Margaux wine estate, who sent more than $US6 million that same month; and Inan Kirac, a wealthy Turkish businessman, who sent $US47 million in November and December 2016.

The scammers also impersonated Le Drian's aides, following up the phone calls with official-sounding email addresses and documents decorated with official-looking letterheads. They sometimes scheduled fake appointments with Le Drian at the French Parliament, or sent fake documents from France's central bank, purporting to show that the money was being reimbursed.

"It's a signal for society that it is extremely serious to pose as a minister, even more so in a context as delicate as the fight against terrorism," Meillet said.

David-Olivier Kaminski, a lawyer for Lasarevitsch, accused of being the other mastermind, said the sentences were "dizzyingly high" for a fraud case.

"The court wants to send a signal that is completely disproportionate in financial matters," Kaminski said.

Some money transfers were blocked after the victims realised they had been cheated. But $US50 million bounced from shell account to shell account and has not been recovered. Investigators are still working to trace the money, and the defendants found guilty could face additional money-laundering charges.

The court in Paris also awarded millions of euros in damages to some of the victims — the biggest amount, €44 million, went to Kirac, the Turkish businessman. But it was unclear if investigators would be able to recover the money.

Chikli is a swaggering Franco-Israeli whose life was the subject of a movie. He was previously sentenced in 2015 to seven years in prison and fined €1 million for impersonating company chief executives and persuading unsuspecting employees to send money for bogus, top-secret operations.

Chikli had fled to Israel from France before his trial on those charges, and he lived for some time in Ashdod, south of Tel Aviv. But in 2017, he was arrested along with Lasarevitsch in Ukraine and extradited to France.

Chikli repeatedly denied any involvement, arguing that the scam had been the work of copycats who emulated his previous schemes.

But prosecutors also pointed to Google searches for terms like "silicon mask" that were found on Chikli's phone, and they presented recordings of the phone calls that were made by some of the group's more skeptical targets. Investigators also said that an analysis of the impersonator's voice showed a match to Chikli's.