Coronavirus will still kill up to 85 people A DAY in England at the end of July, government statisticians predict

Coronavirus could still be killing as many as 85 people per day by the end of July, Public Health England scientists have warned.

A team working with Cambridge University has predicted the numbers of deaths each day will level off or only decline slowly over the next fortnight.

Over the past seven days an average of 83 UK deaths have been announced each day by the Department of Health, with most in England.

One top scientist had predicted in June that Covid-19 deaths could hit zero by this month — but Britain’s outbreak has rumbled on and people are still dying.

The report by PHE and Cambridge also predicts there are still around 3,300 people catching the virus every day in England.

It predicts it will take another month for the number of people dying to fall by half in England but it may take even longer in the East, North East and South East.

The researchers did not explain why the deaths will not fall to zero faster, but separate data suggests the numbers of new cases are plateauing after lockdown rules were lifted on ‘Super Saturday’ on July 4, with the outbreak stabilising at around 14,000 people infected at a time. 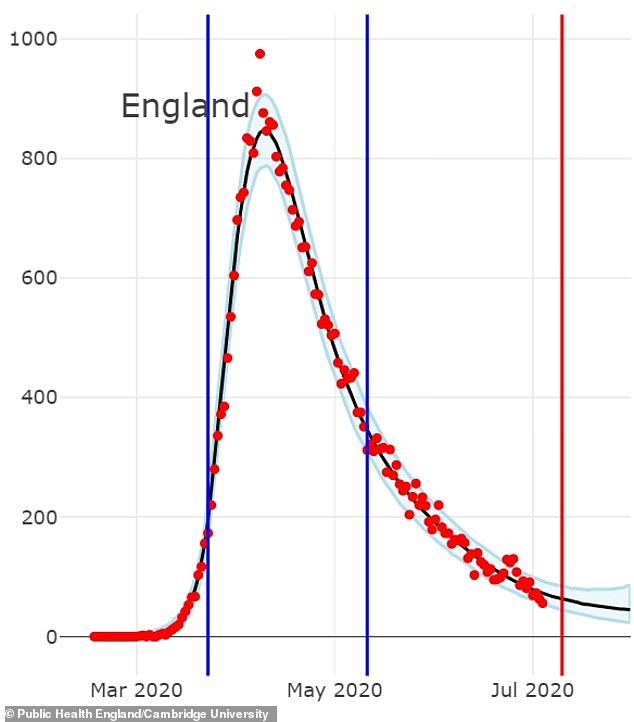 The report by PHE and Cambridge University predicts that the number of people dying is levelling off and will continue to be somewhere between 45 and 85 beyond the end of July (Red dots represent past data while the black line is a projected average. The vertical blue lines mark the start of lockdown on March 23, and the relaxation of the strictest rules on May 11) 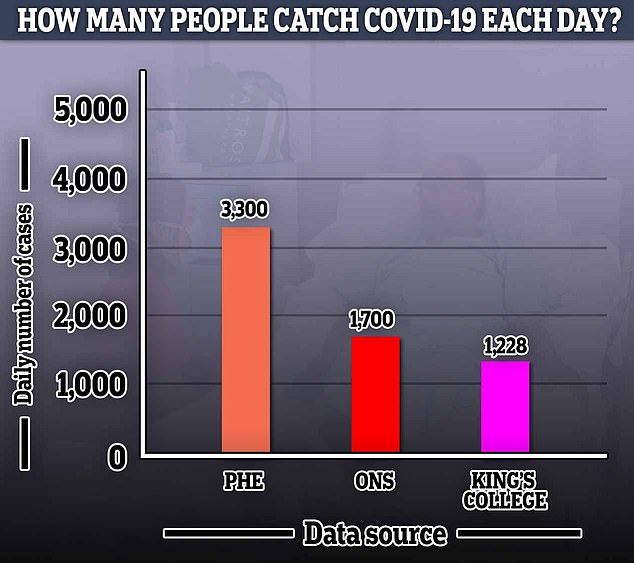 The forecast, which is updated regularly, yesterday said: ‘We predict the number of deaths each day is likely to be between 45 and 85 by the end of July.’

The true number of deaths is difficult to calculate because daily announcements are of backdated fatalities, not ones that have happened that day.

In the week from July 2 to July 8, an average of 22 people per day died of Covid-19 in NHS hospitals in England.

And data from the Office for National Statistics (ONS) suggests hospital deaths make up 63.5 per cent of all fatalities, suggesting the true figure may be 35 in all settings.

However, PHE and Cambridge’s report counts more than 67 deaths per day in the first week of July using data sent to PHE from hospitals and local health teams.

The halving times of the outbreak’s fatalities — which represent how long it takes for the number of new deaths to fall by 50 per cent — vary widely across the different regions.

England’s coronavirus outbreak is still shrinking and the number of new cases each day more than halved in a week, according to the results of a government surveillance testing scheme.

The Office for National Statistics, which tracks the spread of the virus, estimated last week that 1,700 people are getting infected with Covid-19 each day outside of hospitals and care homes — down from 3,500 the week before.

Separate figures, from King’s College London, suggest the outbreak in England has stopped shrinking — but its estimate is lower than the ONS’s at around 1,200 new cases per day.

Deaths are falling slowest in the East of England. The data suggests it could take another 43 days for the number of daily deaths to drop by half. The Department of Health is currently announcing an average of 83 deaths per day.

It is also higher than the English average (30 days), as well as rates in the North East and Yorkshire (37 days) and the South East (30 days).

The outbreak appears to be shrinking fastest in the North West, meanwhile, where the halving time for the death count is an estimated 19 days.

By the end of July there could be just five deaths per day in the North West, with a possible range of 0 to 18, the report said.

Researchers predicted the halving time was 28 days in London, 23 in the South West and 21 in the Midlands.

The rate of decline, however, has not been as fast as some had projected.

Professor Carl Heneghan, an Oxford University epidemiologist, said at the start of June that he thought Covid-19 deaths could hit zero in July.

He said he expected the number of people dying of all causes to drop back to average or below average levels in June, which has now been proved true.

There have been three weeks in a row up to July 3 where fewer people than average have died of any cause in both England and Wales.

However, Professor Heneghan’s prediction of Covid-19 deaths dropping off has not come good.

He said in a briefing at the end of June that ongoing outbreaks in care homes were propping up the death toll when it was declining elsewhere.

It was ‘disappointing’ that care home outbreaks were still being recorded, Professor Heneghan said, and that every outbreak was likely to cause more deaths because elderly people are the most vulnerable to Covid-19.

‘I still think this is an incredibly important number [care home outbreaks] for us to manage,’ he said on June 23.

‘If we’re going to eradicate this infection we’ve got to get this number down to zero.

‘If we continue with the inability to control the infection in those settings we could see it linger on right to the end of July.

‘I think we’re not far off having a window where zero deaths will happen… I think we’re just slipping slightly.’ 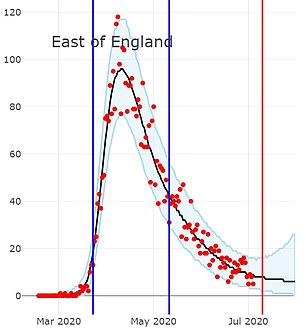 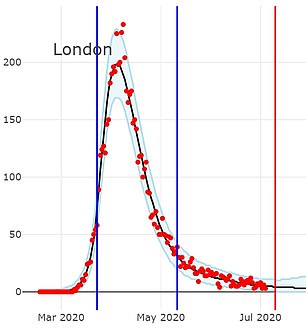 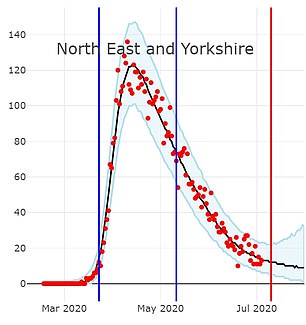 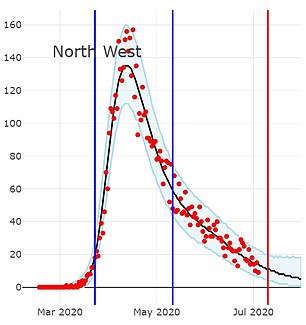 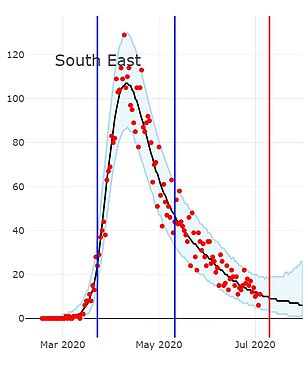 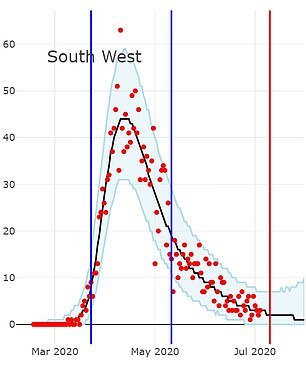 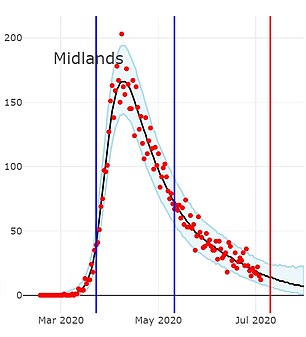 The forecasting report also estimated the number of new Covid-19 cases appearing each day to be 3,300 across England, with a possible range of 1,900 – 5,700.

This is a rise from the team’s estimate on July 1, when it was 2,900, which may be due to the loosening of lockdown restrictions or localised outbreaks like the one in Leicester.

The Department of Health’s testing programme has detected an average of 624 new cases over the past seven days, with 530 people diagnosed yesterday.

The PHE estimate of new cases is falling – it was 5,300 last week, later adjusted to 3,600 – but remains higher than estimates from the ONS and an ongoing project by King’s College London.

The Office for National Statistics, which tracks the spread of the virus, estimates 1,700 people are getting infected with Covid-19 each day outside of hospitals and care homes.

Separate figures, from King’s College London, suggest the outbreak in England has stopped shrinking — but its estimate is lower than the ONS’s at around 1,200 new cases per day.